ER Editor: We had reported on this topic back in May. See Russia Moves to Withdraw from WTO, WHO. It is still a topic on the burner, with no further moves being made by Russia so far except to withdraw from the Council of Europe, which it did months ago.

Peter Koenig below describes the thoroughly political nature of these globalist (i.e. cabal) institutions, making the astute point that Russia, as the largest country in the world comprising a massive area of the world’s surface replete with enormous deposits of raw materials, is thus a target (if not ‘the’ target) of the World Economic Forum crowd. Why would it bother to remain within these institutions?

Should Russia withdraw from them, Thierry Meyssan has this to say:

After the United Kingdom announced that it would cease all exports to Russia, in violation of WTO rules, the United Russia Party tabled a bill in the Duma to withdraw Russia from the World Trade Organization (WTO) so as not to have to fulfill unilaterally the commitments of the organization.

Globalization as we have known it for thirty years is dying. The splitting of the world into two distinct zones should ultimately bring about the economic downfall of the West.

Russia to Exit WHO, WTO and Other UN Agencies? 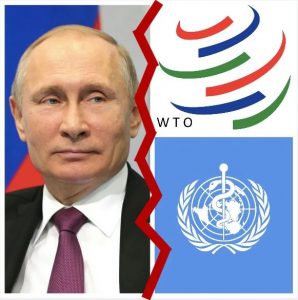 This topic has received little or no coverage by the western mainstream media.

According to Russian Duma’s Deputy Speaker Pyotr Tolstoy, the Russian Government is evaluating the possibility of withdrawing from a number of UN agencies, most visibly WHO and WTO which they consider do Russia more harm than good. This may be particularly the case with WTO, which Russia only joined in 2012 after 8 years of negotiations, because WTO allows countries under the western sanctions program to increase tariffs on Russian goods way above the WTO guidelines. 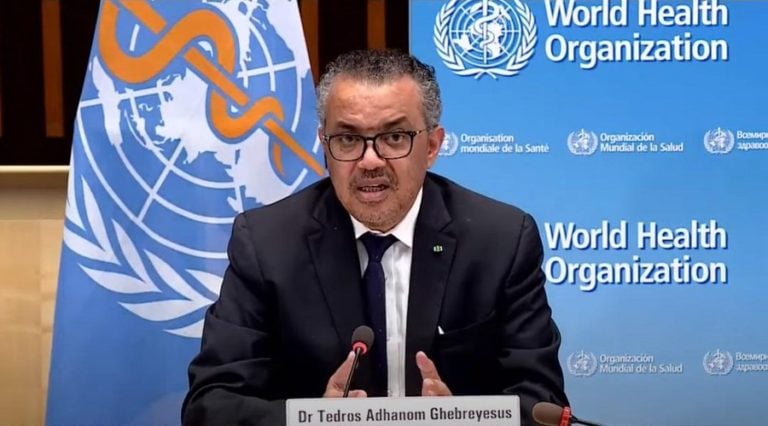 WTO removed Russia’s “most favored nation” status in response to its invasion of Ukraine, which led several countries to suspend Moscow’s trade preferences and impose tariffs in excess of what WTO rules typically allow. WTO, created under the Charter of the UN, is not to take political decisions in favor, or against a member of its 164 member-organization.

See this. (ER: from May 2022, Russia takes first steps to withdraw from WTO, WHO)

Under pressure from the US and European governments, hundreds of western businesses, from Adidas, McDonald’s, and Pepsi to BP, Renault, British American Tobacco, Starbucks and many many more, have pulled out of Russia for fear of direct western sanctioning. McDonald’s said its cost for leaving Russia was equivalent to US$ 1.3 billion. Is the sacrifice worth it?

Never mind, it is contributing to anti-Russian propaganda – which in itself, contributes to the ever-mounting western pressure for “regime change”.

As to WHO – while the agency pretends being non-political, in reality it is just the contrary, only political. WHO, under pressure from Bill Gates and the US, never approved the Russian Sputnik V as an official “vaccine” – like Pfizer, J&J, Moderna and all the western fake vaxxes.

WHO joined the west in condemning Russia for the war in Ukraine, never looking at the reasons that may have prompted the war, and never looking into the health impacts of 8 years bombarding and aggressing the Donbas Region by the Kiev regime with the help by Neo-Nazi Azov Battalions.

While no war is justified, analyzing the reasons that led up to war might help negotiating for peace and preventing other wars.

Nor did WHO evaluate independently the damage on Eastern Ukraine’s health facilities and inhabitants since the beginning of the war on 24 February 2022. Because most, if not all, attacks on Donbas health facilities, as well as outright killing of civilians Kiev claims and the west confirms, were Russian inflicted, when in fact the very Ukraine government carried out “false flags” against their own people.

It would behoove a neutral WHO to analyze causes of mass death, disease and injury reports. Not doing so and instead simply supporting the western version is a serious breach of WHO’s Constitution and role in determining the cause of the deteriorating state of a society’s wellbeing. 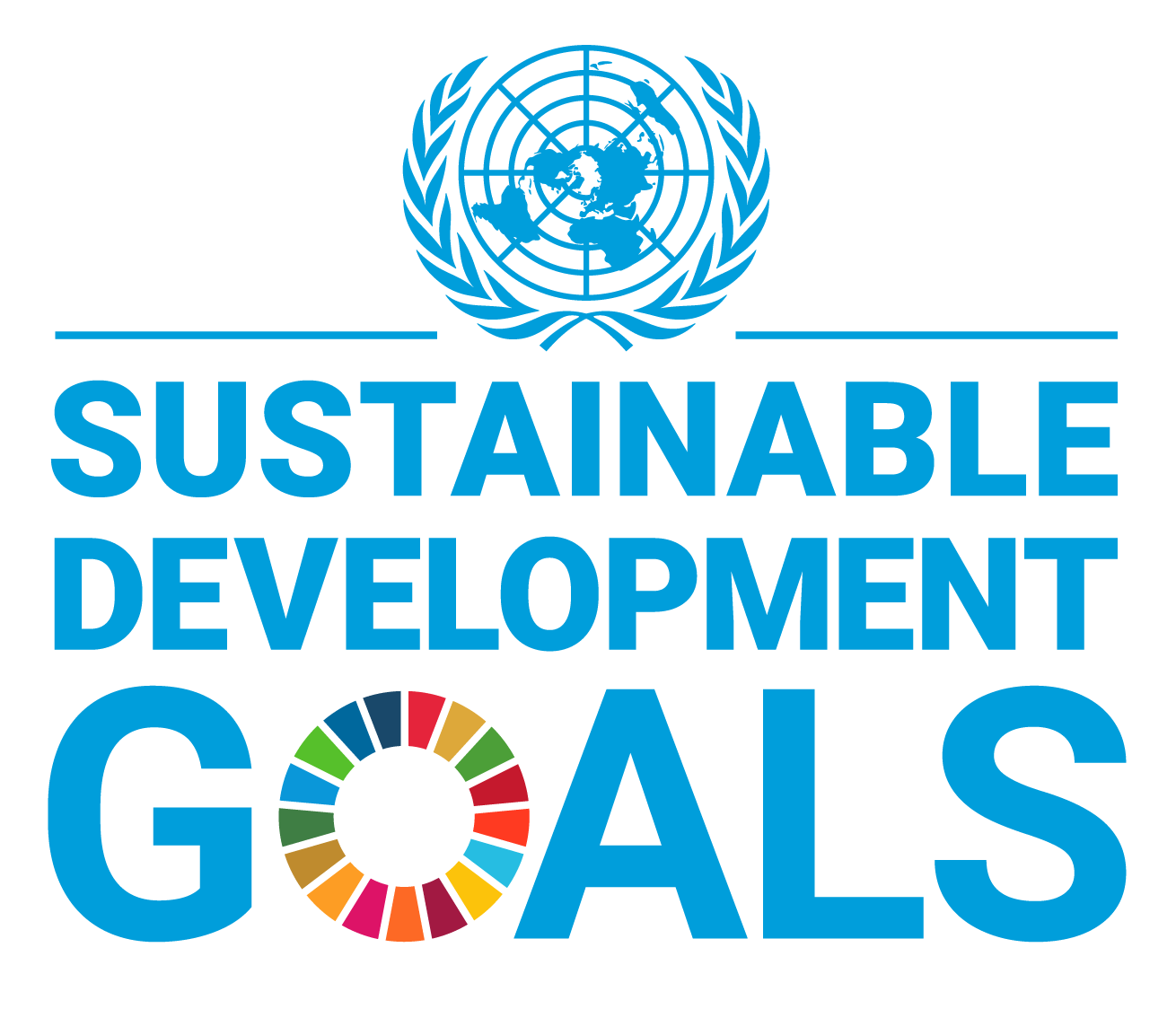 No war is justified – including economic wars (sanctions), wars with fear as the chief weapon, and wars destroying food, causing famine and death. The UN Human Rights Commission did not speak out against the WEF’s Great Reset nor did the UN. In fact, on June 13, 2019, the UN signed a Strategic Partnership Framework with the WEF, outlining areas of cooperation, notably the infamous UN Agenda 2030.

By doing so, the 193 member-UN body not only lost its luster (if it still had any), but more importantly its role as Peace Arbiter in the world, and as a defender of justice and human rights. The WEF is an insanely wealthy NGO at the service of Big-Big Finance and individual oligarchs.

The Great Reset, which was in the making long before the Partnership Framework Agreement with the UN, is the ultimate control mechanism for the world’s resources and for humanity.

Russia is not only by far the world’s largest country, surface-wise, but arguably also by far the wealthiest in terms of natural resources. Russia is, therefore, in the crosshairs of western empire forces, including and foremost the WEF and its handlers.

Hence, the Russian Foreign Ministry is right when claiming that many of the UN institutions are working against the interests of Russia — which is a good reason to exit them.

Looking back at recent history may bring some insight as to why Russia, and especially President Putin, is so much slandered and outright hated by the west – of course, 24/7 supported by Western-corrupted media propaganda. 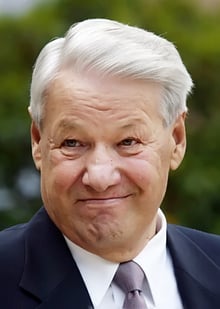 The West would have loved Boris Yeltsin (10 July 1991 – 31 December 1999) to stay in power into the 21st century. Yeltsin allowed the West – mainly FED, IMF and World Bank – to ravage and privatize Russia’s state-owned economy during his ten-year tenure.

Perhaps out of remorse for his leniency towards Western depredation of his country, Yeltsin was looking out for a strong and intellectually brilliant successor. In August 1999, he appointed the then little-known KGB Officer, Vladimir Putin, as Prime Minister. It was a clear sign that President Yeltsin was preparing Putin for leading the Kremlin.

Nobody in the West suspected Putin to bring Russia up from her knees to a full world power position. And that in less than two decades.

Russia, close ally of China and active member of Eastern integration, will not only survive the pressure but will thrive under the slandering pressure.

Leaving nefarious UN agencies may give other think-alike countries which wanted, but didn’t so far dare, to take such drastic action, a signal that they too may be better off not belonging to this Western-corrupted international network, including the European Union.

Peter Koenig is a geopolitical analyst and a former Senior Economist at the World Bank and the World Health Organization (WHO), where he worked for over 30 years around the world. He lectures at universities in the US, Europe and South America. He writes regularly for online journals and is the author of Implosion – An Economic Thriller about War, Environmental Destruction and Corporate Greed; and  co-author of Cynthia McKinney’s book “When China Sneezes: From the Coronavirus Lockdown to the Global Politico-Economic Crisis” (Clarity Press – November 1, 2020)

Peter is a Research Associate of the Centre for Research on Globalization (CRG). He is also is a non-resident Senior Fellow of the Chongyang Institute of Renmin University, Beijing. 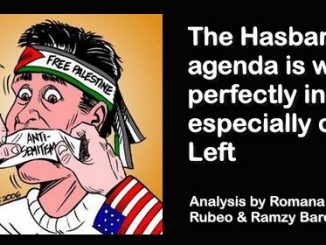 The Declining Empire of Chaos Is Going Nuts Over Iran 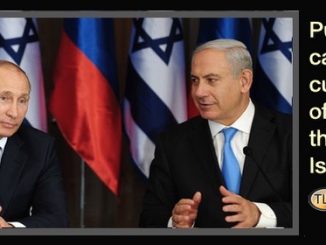 Israel and Russia are NOT on the verge of war – they are allies!