Turkey is poised for an imminent massive ground invasion of Northern Syria to quash Kurdish militia groups currently holding Afrin near the Turkish border. Multiple regional outlets have reported a build-up of forces that could constitute the largest external intervening force thus far in the entirety of the Syrian war. 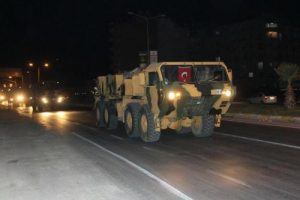 Turkey considers it a “terrorist” enclave as it sees Syrian Kurdish factions as an extension of the PKK, while the US has claimed not to be active in supporting Kurdish operations in Afrin, which lies a mere 40 kilometers from Aleppo where the Syrian Army continues to advance through the Aleppo countryside and into Idlib province.

Over the weekend President Recep Tayyip Erdogan slammed recent US efforts to ramp up support for the Kurdish dominated Syrian Democratic Forces (SDF), saying during a speech in Ankara, “A country we call an ally is insisting on forming a terror army on our borders.” He framed US support to Syrian Kurds as undermining Turkey’s security, adding, “What can that terror army target but Turkey? Our mission is to strangle it before it’s even born.”

Meanwhile a top Turkish general told a meeting of NATO military commanders, “We cannot and will not allow support and arming of the YPG terror group under the name of an operational partner. We hope this mistake will be corrected in the shortest time.”

Regional outlets Al Jazeera and Al Masdar News have confirmed that the large Turkish convoy has entered northwest Syria and that sporadic fighting against Kurdish forces is already underway. Notably, the air force is said to be mobilized – a significant factor as Turkish ground forces, including its proxy rebel forces making up its “Euphrates Shield Operation”, have had little success in the past dislodging Kurdish fighters without air support. 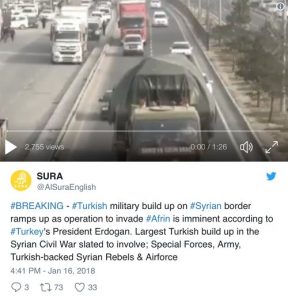 Should aerial power be utilized by Turkey it would mark a dramatic escalation, especially given that both Russia and the US operate over Northern Syria, with Russia controlling the airspace over Afrin Canton (as well as over Idlib, which have generally frustrated Turkish plans for greater involvement). Whether the operation against Syrian Kurds moves forward or not into a full scale Turkish assault depends in large part on Russia, which has administered ‘deconfliction’ zones in the Afrin area, and has sponsored trilateral talks with Turkey and Iran which seeks cooperation among the three powers to wind down the war in Syria.

In response to news of the impending Turkish invasion, US Coalition spokesman Col. Dillon said Tuesday of the Syrian Kurds in Afrin, “We don’t support them, we have nothing to do with them.” Dillon explained further when pressed by Turkish state media journalists, “We are not operating in Afrin. We are supporting our partners in defeating remaining ISIS [Daesh] pockets along the Middle Euphrates River Valley, specifically in areas north of Abu Kamal, on the eastern side of the Euphrates River.” 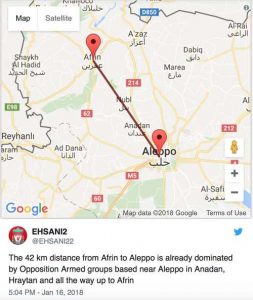 Turkey’s current build-up and offensive comes after Dillon’s controversial comments on Sunday in which he announced that the US coalition will establish a 30,000-strong new border security force with the SDF in Syria. In claiming to have “nothing to do with” Syrian Kurds operating in Afrin, the Pentagon is seeking to distance itself from entering into direct conflict with Turkey in northwest Syria.

Though Turkey has threatened many times before that it will dislodge Afrin from control of the Syrian Kurds, Erdogan might not be bluffing this time. Late on Tuesday he’s reported to have phoned NATO General Secretary Jens Stoltenberg in order to inform NATO that the Afrin operation is being launched. 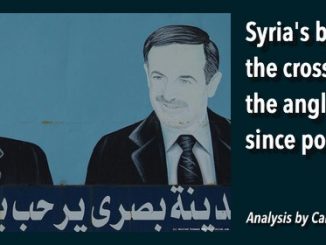