ER Editor: Altlhough we’ve published on pretty much each and every item Paul Craig Roberts mentions below in relation to the vaccines and their rollout, this piece puts it all together very nicely. A bird’s eye view as we end 2022.

The Evidence Is Conclusive: Covid Vaccination Was Mass Murder 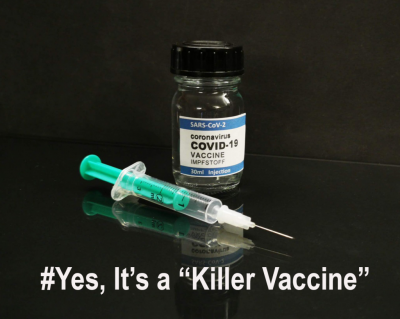 As readers know, I am concerned that the neoconservatives’ drive for US hegemony is the road to nuclear war.  But we also face demise from other directions.  In this column I share thoughts on the use of orchestrated pandemics to destroy economic independence and civil liberty and to reduce the world population, a declared goal of Bill Gates and Klaus Schwab.  In subsequent columns I will address other threats that go unattended.

Professor Michel Chossudovsky, emeritus professor at the University of Ottawa and Founder and Director of the Centre for Research on Globalization, has made an important point.  The injection of a dangerous substance into a large percentage of the world population was not a mistake, but an intentional act of murder.

Pfizer and the US Food and Drug Administration (FDA), charged with protecting public health, knew in February 2021 that the Covid “vaccine” that went into use in mid-December 2020 was deadly and under law should have been recalled.

Pfizer’s own internal documents recorded 1,200 deaths from the vaccine and tens of thousands of adverse health effects including cardiac disorders and spontaneous abortions over a two month period.  Understand, the report, which was to be locked up for 75 years, was a forced release resulting from a federal court order to the FDA. It is Pfizer’s own internal report.  It is not a report by independent medical scientists that some pretend “fact checker” can label as “misinformation.”

The report is now public.  Under law, as Pfizer and the FDA knew the “vaccine” was dangerous to life and health and did not recall it, they committed murder.

The issue before us is the missing indictments for murder of the Pfizer executives and FDA officials who are responsible for the deaths and injuries of millions of people.

As the presstitutes are totally complicit in the mass murder, don’t expect any attention from the media to the released Pfizer report, backed up by the extraordinary increase in excess deaths in every vaccinated country following the vaccination campaign.  Dr. Michael Yeadon, formerly Pfizer Vice President and Chief Science Officer, has said that in addition to the deaths, infertility, and injuries from the “vaccine,” the effect of the “vaccine” is also to seriously impair the immune system, thereby making everyone injected susceptible to morbidity from diseases.

Don’t expect Congress or the Executive Branch to do anything.  Members of the House and Senate are dependent on campaign contributions, and Big Pharma are heavy contributors. The FDA is a marketing agent for Big Pharma.

Don’t expect the medical profession to do anything. Big Pharma is responsible for 70% of medical research grants.  Medical scientists are not going to bite the hand that feeds them. Former editors of the New England Journal of Medicine and The Lancet have said that they have no confidence in the research reported in the journals because 70% of the articles are financed by Big Pharma.  Big Pharma is also a large donor to medical schools.  The FDA, like all regulatory agencies, is captured and run by those they are supposed to be regulating.

Peter Koenig, formerly of the World Bank and the World Health Organization (WHO), concludes that we are faced with “a clear eugenics agenda, mass depopulation, unprecedented.”

We should be terrified that Bill Gates, WHO, and the bought-and-paid-for Johns Hopkins Center for Health Security recently completed (October 23, 2022) two months ago a simulation of the next pandemic. See this.

Remember the “Covid Pandemic” was preceded by a similar simulation just prior to the release of the Covid virus.  A Dutch expert has revealed that the plan is in place for 10 years of infectious pandemics to pave the way for the Great Reset.

Keep in kind that the Covid virus was the product of years of research funded in part by Fauci at NIH.

Keep in mind that Covid test kits were produced years in advance of the Covid pandemic. Obviously, someone knew in advance that a pandemic was coming.

Before you do what you have been brainwashed to do and dismiss facts as a conspiracy theory, ask yourself how it is possible for so many pieces that fit together to be a coincidence.

As there is no media, few independent politicians, and a gullible and unaware population, what is to stop the coercion by fear of the world’s population into the serfdom and slavery of the Great Reset? Elites committed to an ideology have decided that they have the moral right to take over our lives.  The elites know that the sheeple  will submit. Fear will govern them.

Twitter Prevented Experts From Speaking Against the Disastrous Covid Protocol, see this.

Paul Craig Roberts is a renowned author and academic, chairman of The Institute for Political Economy where this article  was originally published. Dr. Roberts was previously associate editor and columnist for The Wall Street Journal. He was Assistant Secretary of the Treasury for Economic Policy during the Reagan Administration. He is a regular contributor to Global Research.

The Phenomenon of Food Factory Fires Has Also Started in France

The Consequence of Globalism Is World Instability