ER Editor: This article was posted on Telegram by Ice Age Farmer on Sept 11 with the following:

Another mass kill of livestock: 57,000 cows perish in India – milk shortages and ‘hundreds of carcasses of dead cows have been found lying in the open, causing a nauseating stench, with crows and cultures feeding on them.’

Media asking ‘Why’ – some farmers suggesting the cows were recently vaxxed against Lumpy Skin Disease (LSD).

‘Pictures taken with the help of drone cameras reveal a large number of carcasses spread over several square kilometre area. In some places, it is even difficult to keep a count of those dead.’

Interested readers may want to google ‘World Economic Forum post-animal economy’. All roads tend to lead back to them.

Is vaccination causing this problem or merely exacerbating it? Is something else causing this? Media figure Rajat Sharma does not criticize vaccination, on the contrary. After Covid and those bio-labs, nothing is off limits.

This is the area of India most affected, currently: 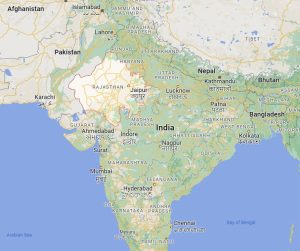 OPINION | Who is responsible for the death of thousands of cows in Rajasthan?

In Jodhpur, there is now acute milk shortage and milk prices have shot up by 50 per cent. Farmers who rear cattle are facing problems

Sordid visuals of thousands of cows dying of Lumpy Skin Disease (LSD) in several districts of Rajasthan have caused widespread anxiety among people.

Hundreds of carcasses of dead cows have been found lying in the open, causing a nauseating stench, with crows and vultures feeding on them. Pictures taken with the help of drone cameras reveal a large number of carcasses spread over several square kilometre area. In some places, it is even difficult to keep a count of those dead.

Local residents from several districts of Rajasthan have put the death toll at more than 50,000, while the state government has said that 45,000 cows have died of the virus and nearly 11 lakh cattle have been affected.

In my prime time show ‘Aaj Ki Baat’ on Friday night, we showed scary ground reports from Jodhpur, Bhilwara, Bikaner, Barmer, Jalore, Ganganagar, Nagaur, Jaisalmer, Karauli, Dausa, Bharatpur, Ajmer, Boondi and Kota. The cow is regarded as holy mother in Hindu scriptures, but the Lumpy Skin Disease is spreading like an epidemic. Meanwhile, due to an acute shortage of milk, prices have shot up by Rs 10 to 20 per litre in some districts of Rajasthan.

In my show, we showed dead cows lying in the open on streets in Jodhpur, the home district of Chief Minister Ashok Gehlot. Carcasses have been found lying in several streets with stray dogs, crows and vultures feeding on them. The stench is pervading in Jodhpur city. There are no proper arrangements for disposal of carcasses.

Our reporter Manish Bhattacharya, who visited Jodhpur, reported that more than 3,800 cows have died of LSD in Jodhpur alone. People are avoiding to walk on the streets because of carcasses. One of the local residents alleged that the carcasses have been thrown on streets by the local municipal corporation staff.

Lumpy Skin Disease is a contagious viral disease that affects cattle and causes fever, and later nodules appear on the skin. The disease is spread by mosquitoes, flies, lice, wasps and through direct contact among cattle, and also through contaminated food and water. The cattle dies after some time.

In Jodhpur, there is now acute milk shortage and milk prices have shot up by 50 per cent. Farmers who rear cattle are facing problems, as there is no assistance from the government for providing vet doctors and medicines. Farmers are forced to use their own line of treatment, thereby causing largescale death of cows. A local dairy owner said milk production has dropped by nearly half after this epidemic.

The Rajasthan government claims that Rs 30 crore (ER: 1 crore = 10,000,000 or 10 million) have been allotted for vaccination of cattle, and till now more than 6.5 lakh (ER: 1 lakh = 100,000) cattle have been vaccinated, but the ground situation belies the claims. Experts say that vaccination is needed before the virus attacks cattle, but if vaccination where the virus has already spread, it becomes ineffective.

India TV reporter Manish Bhattacharya took visuals of carcasses lying on a vast area from his vehicle. The dead bodies were spread on an area  that is one to 1.5 kilometre long. With no sign of assistance from government, local farmers in Jodhpur, Bikaner, Barmer, Jalore and Ganganagar have, with the help of some NGOs, started a campaign to protect their cattle, by giving medicines and spraying insecticide in cattle sheds.

Thirty one out of 33 districts of Rajasthan have been affected by Lumpy Skin Disease. In Bikaner, government has claimed only 2,600 cows have died, but the visuals show the opposite. In a large area named Jodbeed, hundreds of carcasses are lying in the open, away from the city. The Mayor of Bikaner could not stand in the area for more than five minutes due to the pervading stench emanating from carcasses.  The Mayor alleged that more than 10,000 cows have died in Bikaner alone, but the state government is concealing facts. She was countered by Gopal Ram Birda, commissioner of Bikaner Municipal Corporation, who claimed that Jodbeed has been a ground for disposal of cattle carcasses since several years. He also claimed that most of the cattle did not die of LSD.

The District Collector of Bikaner Bhagwati Prasad Kalal claimed: “Photos showing thousands of dead cattle dumped in a ground in Jodbeed is misleading.  It is a demarcated zone to dispose of dead animals. Carcasses of animals that die in the city are brought here, the skin is removed, and the skeletons are left to dry. The contractor later picks up these bones to sell in the market. Almost 1,000 carcasses are always found here.” The Collector however admitted that more than 2,600 cattle have died due to LSD in Bikaner.

In Bhilwara, a separate quarantine centre has been created for cows affected by LSD. Sixty cattle are presently in this quarantine centre, and 13 cattle have recovered after treatment. The city’s Nagar Parishad commissioner Durga Kumari claimed that cattle affected by virus are immediately quarantined in this centre, they are provided food and medicines, so that they can recover soon.

The epidemic is widespread in western Rajasthan, while its effect in eastern part is less. The question is: since the spread of Lumpy skin virus had been in the news for last two months, why didn’t the state government take timely action to prevent these deaths? Chief Minister Ashok Gehlot was also told about the spread of the virus by several ex-ministers, and a virtual meeting was done two weeks ago, but in the meeting,  former Health Minister Raghu Sharma had a spat with Agriculture and Animal Husbandry Minister Lal Chand Kataria. Raghu Sharma alleged that officials are not taking this disease seriously, and vet doctors are being transferred to other districts. BJP leader in a delegation met the Governor on Friday and demanded that the state government must take emergency measures.

It is clear that Rajasthan government is concealing the exact statistics about death of cattle due to lumpy skin disease. The state government has now become active, it has opened quarantine centres and vaccination of cows has begun, but all these measures should have been taken two months ago. Ashok Gehlot is an experienced chief minister and I fail to understand why he failed to gauge the enormity of the crisis. Experts say, since the virus is spreading fast, it is difficult to predict when the situation will be brought under control.

12 states in India are facing the onslaught of lumpy skin virus. In neighbouring Uttar Pradesh, the virus has spread in 23 out of 75 districts. Till now, nearly 12 lakh cows and other animals have been affected, but only 220 deaths have been reported. Nearly 10,000 cows recovered after treatment. UP government has started large-scale vaccination of cattle. Till now, nearly 9 lakh vaccines have been given. UP  chief minister Yogi Adityanath  has decided to create a huge 300 km long and 10 km wide quarantine corridor from Pilibhit to Etawah district. This will pass through five districts.

The virus is presently more in Rajasthan, Haryana and parts of western UP. Authorities are trying to prevent the spread of the virus by creating quarantine zones.

A pro-active government can face any big challenge. When reports of spread of lumpy virus came from Rajasthan, Yogi Adityanath was soon off the mark. He started prevention measures in UP. Animal markets were banned, and a massive cattle vaccination programme began in western UP.  This reminds us of how Yogi’s government had tackled the Covid challenge that earned him plaudits from across the world. Other chief ministers should learn from Yogi Adityanath.

Sweden To Apply For NATO Membership – Finland To Decide “Within Weeks”