“Five million Syrian people have already been forced to leave their country. Now they are being scattered all over the Middle East: throughout Lebanon, Jordan, Iraq, Egypt, and Turkey. Some have even gone as far as Europe, Canada and Chile.

How much more can one country endure?

And how can the rest of the world just stand by and watch as it is put through hell?

The answer is obvious: the rest of the world does not know; it does not understand! The propaganda coming out of the Western mass media outlets and indoctrination-spreading institutions is so thorough, so professional, that to most of people all over the world everything related to Syria appears to be blurry, murky, and incredibly complex. President al-Assad is demonized on a daily basis. Heroic resistance is called the “regime’s brutal actions”, pro-western terror groups are described as “moderate opposition.”

This is what my good friend, Andre Vltchek, wrote in his recent piece about “Syria’s Heroic Fight Against Western Imperialism”. It is almost an understatement. Living in Europe, being exposed to the daily, hourly, horrifying barrage of abject lies, day-in-day-out, for weeks no end, is unbearable.

Europe, alias the West, has become infested with falsehoods, with thirst for profit and more gains and personal comfort, a hearth of egocentricity and disrespect for her brothers and sisters, let alone for the rest of the world – there is no equal on earth, other than the US of A, the Master of all Masters of crime and horror. Europe with its hundreds of years of colonization always was the chieftain of these ignoble attributes, but now, all scruples are gone; the veils are lifted. There is not even an iota of shame left. 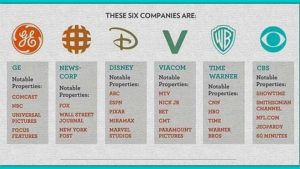 Let’s face it, the six Anglo-American media giants that dominate the western world, can spend billions on propaganda. Money doesn’t matter. Money is made of thin air. Money for wars doesn’t matter either – it’s also made of thin air. It’s made by the dollar manufacturing machine, meaning the US private banking system. Today, 97% of all the money produced in the US is made by private banks in the form of debt, mostly by Wall Street. And the epitome of financial fraud throughout the globe is Goldman Sachs, the same GS that makes EU financial and monetary policy, through the European Central Bank which is headed by a former GS executive.

So the rest of the world, which is buying US debt as treasury bonds in their reserve coffers, is actually financing all the wars and the slandering of unbending nations, like Syria, Russia, China, Iran, Venezuela – and the list is growing every day, as people are resisting. Most of the propaganda is directed against the very nations that are held hostage by the western dollar-based casino scheme. To add a little caveat: It is all controlled by the Rothschild gang, in connivance with the Rockefellers and consortia of this world, as is the FED itself.

A selection of the Rothschild family

Syria’s fight is indeed heroic. She stands up tall and bold, while burying her hundreds of thousands of dead, many of them women and children – the children who would be the future of Syria to rebuild their country. Now they are gone. They died miserable torturous deaths, by cluster bombs, phosphorous-laden missiles and poisonous sarin killer gas, provided to the terrorists by NATO, CIA and Mid-Eastern vassal allies. Others had to flee their homes, their country under the most horrible conditions of famine, disease, discrimination and violence. But the western MSM have brainwashed their public to believe it is the work of Bashar al-Assad, the legitimate President of Syria, who still enjoys close to 80% support of the Syrian population, with the help of Russia and, of course, as always, President Putin. It’s been said before but must be said again – we are in the midst of WWIII, but thanks to the number one diplomatic chess strategist, Vladimir Putin, we have so far been spared from a nuclear war. 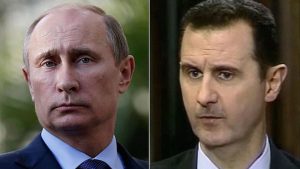 Syria is not only fighting the most abhorrent weaponry the west invented to not just kill, but to cause tremendous suffering before death – and to cause for those who survive, generations of malformations and birth defects, generations of people who could not live normal lives, even if peace one day would return. Falluja in Iraq is just an example. Aleppo may become another such horrifying legacy, if not liberated soon by Syria’s and Russia’s armies.

When one sees the pictures of the war victims, or reality itself, the barbarism being committed in Syria and the Middle East, accompanied by the constant rumble of western lie-propaganda, day by day, there is no other option than to conclude that the west has ceased to be human. That process has started hundreds of years ago, by colonial exploitation, mass-murders, esclavisation, torture of literally the entire world by the West and its monotheist Judo-Christian religions. Just think of water-boarding and other diabolical forms of torturing, invented under the Catholic Kings of France and Spain, the infamous Inquisition that began in the 12th Century and lasted for almost 800 years. Its revolting torture methods were promptly taken over by our modern western special forces and secret services, like CIA, MI6, Mossad and all those who serve the empire – which itself is nothing more and nothing less than the descendant of inhuman European stock.

Syria is confronting an entire western culture (sic), dying indeed, but kept alive with an artificial heart, the nefarious dollar-making-machine, as long as feasible with the western pyramid or Ponzi monetary scheme. We, who see through this horror, have to stand up and scream it out to the people, to awaken them from their brainwashed state of zombie, to ignite in them the tiny spark of conscience that we were all born with. Will we succeed?

Make no mistake, Washington will never let go – not by itself, never. Their target is world hegemony – the goal of their self-indulging PNAC – Plan for a New American Century. And to attain this goal, the fall of Syria had been planned long in advance, in the early 1990’s. “Regime Change” is relentlessly being pursued – see Wesley Clark at the Commonwealth Club of California, October 3, 2007 – ‘7 countries have to fall in five years’

In addition to the balkanization of Syria, along with the spreading eternal chaos throughout the Middle East and North Africa, one of the key reasons why Mr. Assad has to go – is the infamous Qatari gas pipeline which the US oil giants want to pass through Syria and Turkey – and to which Mr. Assad said NO. He said ‘no’ in 2000; and a definite ‘no’ in 2007. That’s when the CIA started recruiting and training terror groups that would eventually erupt into another ‘Arab Spring’ in 2011 in Syria, to become what’s now euphemistically called a civil war – which is another outrageous lie. It’s a full-out war, driven by Washington with NATO and its European and Mid-Eastern vassal allies – and their foot soldiers and well-paid mercenaries, the western recruited and groomed terror armies. (See F. William Engdahl, Global Research, March 16, 2016

This pipeline is meant to disrupt the Russian European gas market – and, most important – to keep the hegemony of the dollar. It would again justify printing trillions of new debt dollars, just to extend the reign of the dollar a bit longer. The alternative pipeline, Iran-Iraq-Syria to Europe would be complementary. It is favored by Iran, Russia and Syria; and covertly also by most future European clients, as they would be free from the yoke of the western dollar system. Russia, China and the SCO (Shanghai Cooperation Organization) alliance have freed themselves years ago from the rule of the dollar, using their own currencies for trade, including for trading hydrocarbons. 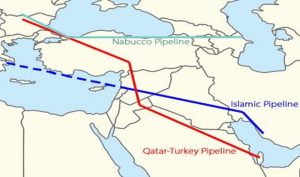 The only way to defeat the monster, is by pulling the rug from under its bloody boots – the monetary rug, that is. This is already gradually happening and may be happening much faster than we think. The ‘crisis’ artificially started by Washington in 2007 / 2008 – under orders of the cream of crop of the occult elite that pulls the strings on Obama, Merkel, May and Co., towards the One World Order – is never ending, as it is meant to prolong the supremacy of the dollar and its by-product, the euro, to the very Armageddon. But, We, The People, can stop it from reaching that horrifying end.

As long as the world is blind to this fact and pundits keep arguing about details of the ‘crisis’ and who is to blame for it (when the willing culprits are clearly those ‘invisible elitists’ who control the monetary system), or as long as politicians are afraid of the consequences of seeing the light, so long the hegemon will advance and encircle the world, like an octopus, gradually but steadily sucking up all its internal and external juices. It’s already happening.

Look at NATO aggressions at Moscow’s doorstep, the absurd and highly propagated US threats on Chinese sovereignty in the South China Sea, are clear signals, that there is no way in heaven that Washington will seriously negotiate for anything; not for a cease fire in Syria, not for reducing weapon-grade plutonium, not for a halt to fighting in the Ukraine Donbass – not for anything. Every attempt at diplomacy is an abject failure, as it is countered with verbal insults at the UN, with lies, accusations and denigrations in all western media. Syria is considered but a stepping stone towards Washington’s Full Spectrum World Dominance – the goal clearly spelled out in the PNAC.

But Syria is no stone, let alone a stepping stone. Syria is a solid rock. Syria has the world’s strongest alliance it could dream of – Russia, Iran and China. This Alliance of Peace will eventually triumph over the diabolical US-NATO-Brussels terror-alliance of destruction and killing.

Peter Koenig is an economist, and water resources and environmental specialist. He has worked for over 30 years with the World Bank, the World Health Organization, and the Swiss Development Cooperation, in Africa, Middle East, Eastern Europe and Central Asia, East and South East Asia and Latin America. Peter is also a geopolitical analyst for Global Research, Information Clearing House, RT, PressTV, Sputnik, TeleSUR and The 4th Media, China. He is the author of Implosion – An Economic Thriller about War, Environmental Destruction and Corporate Greed – fiction based on 30 years of World Bank experience around the globe. He is a co-author of The World Order and Revolution! – Essays from the Resistance. 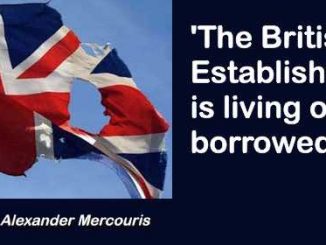 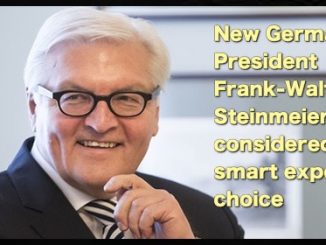 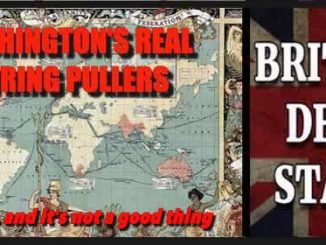 Britain on a Leash with the United States – but at Which End?