ER Editor: We also recommend this Observer report titled The Observer view on the shameful rise in rough sleepers, which makes the valuable point that ‘political oxygen’ is getting used up on Brexit, allowing this critical issue to disappear from view. Which is highly convenient for the Tory government, historically branded the Nasty Party for very good reason.

Visualizing The Surge In UK Homelessness

The figure takes into account people sleeping rough, living in temporary accommodation and the number of hostel places that are taken up. The totals are said to be conservative estimates and fail to account for people unknown to authorities. 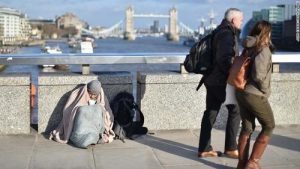 But it’s not just the homeless that are suffering, as The Guardian reports, food banks in some of the poorest areas are preparing for a big rise in demand when universal credit is rolled out by calling for more donations and volunteers, and stockpiling essential supplies.

Volunteers have told the Observer they are concerned about how their communities will cope this winter. In areas where the new benefit has been in place for months, the pressure on food banks has increased. Under the new system, people are made to wait for over a month to receive the benefit. When universal credit is paid out, it is often given as a lump sum, which many find difficult to budget.

The Trussell Trust, which operates 428 food banks, reported in April that its facilities were four times busier in areas where the new credit had been in place for 12 months or more compared with those where it had been introduced more recently.

“Food banks across the UK are calling to tell us that they have suffered significantly, because of increases in demand,” Mamdani said. “They’ve suggested that we need to be more prepared than they were.”

Emma Revie, the chief executive of the Trussell Trust, said: “We’re seeing soaring levels of need at food banks. The time to act is now. If the five-week wait isn’t reduced, the only way to stop even more people being forced to food banks this winter will be to pause all new claims to universal credit. We have to make sure our benefits system can protect people from hunger.”

“These new figures show that homelessness is having a devastating impact on the lives of people right across the country. Due to the perfect storm of spiralling rents, welfare cuts and a total lack of social housing, record numbers of people are sleeping out on the streets or stuck in the cramped confines of a hostel room.”

“We desperately need action now to change tomorrow for the hundreds of thousands whose lives will be blighted by homelessness this winter.” 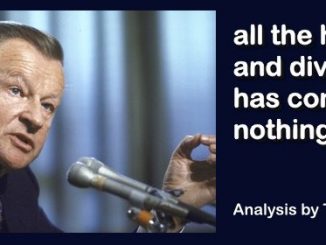 Iran Joins EAEU, or 45 Years Of US Foreign Policy Down The Drain