Diesel is in short supply in Europe.  The situation is about to worsen as the biggest French refinery is shutting down.

Total SA, France’s biggest refiner, is in the process of shutting its largest plant in the country, the 247,000-barrel-a-day Gonfreville facility in Normandy, due to a labor dispute, a spokeswoman for the company said on Tuesday. A few hundred miles away, in the Netherlands, retail fuel stations are running out of supplies because of shipping constraints on the Rhine, according to Royal Dutch Shell Plc.

Shell said Nov. 20 that it cut production at its Rheinland refining site, the biggest complex of its kind in Germany, due to low water levels on the Rhine. In a tweet on Tuesday, the company said that it was temporarily unable to supply some unmanned fuel stations in the Netherlands.

Gas stations in Germany had already been running dry due to the situation on the Rhine, a major petroleum product transportation corridor that runs northwest from the Swiss Alps all the way to the Netherlands. Switzerland released emergency fuel stockpiles because of the situation on the river.

The premium per barrel of diesel over Brent crude – another indicator of market strength – was at $15.96 on Tuesday, the highest for the time of year in six years. 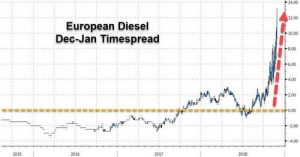 Macron is already reeling over a protest of his diesel tax. 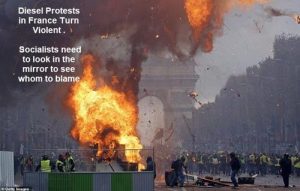 People from across France went to Paris to let the president know how they feel about the taxes in general and the tax on diesel. The [Diesel Tax Protests](Diesel Protests in France Turn Violent) then turned violent.

France depends more on nuclear energy than any other country, getting about three-quarters of its electricity from its 19 nuclear plants.

The French leader promised to develop renewable energy instead, saying his priority is weaning France’s economy from fuel that contributes to global warming.

Excuse me for pointing out that nuclear energy does not add to greenhouse gases, not that this whole global warming scare makes much sense in the first place.

Mr Macron also said the government will find a way to delay tax increases on fuel during periods when world oil prices are rising.

Excuse me for pointing out that the diesel protest came when oil prices were falling.

In an attempt to calm the protesters, Mr Macron proposed a three-month consultation with associations and activist groups, including the so-called “yellow jackets” who have led the recent protests, about how best to handle the rising energy costs.

Yeah right. That’s sure to work.

Courtesy of the New York Times, here’s the comment of the day:

“He seems to be deaf,” said Fabrice Schlegel, who has helped lead some of the citizen protests that have convulsed France in recent weeks.

‘‘He’s talking to us about the ‘ecological transition.’ This is a politician who is floating in outer space.” 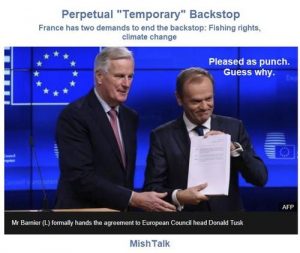 Macron’s diesel and nuclear gaffes are on top of his threat to Keep EU in Perpetual “Temporary” Customs Union Backstop.

Actually, I am happy for Macron for those custom union threats.

Hopefully it will wake up the UK parliament enough to vote down this pathetic deal that Theresa May is attempting to cram down the UK’s throat.

ER recommends other articles by Zerohedge and Mishtalk

The French Strike Shows Workers Need to Deport the Oligarchy