ER Editor: Our thanks to AlethoNews for making the first report fully available. Below that is a TASS report with a few more details. The Pskov oblast through which alleged suspect Natalya Vovk is claimed to have escaped Russia is shown below, a region just beside Estonia and Latvia. 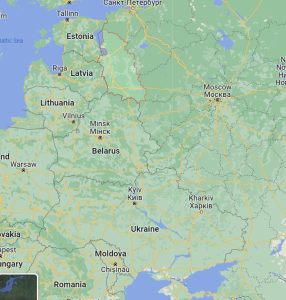 This is mightily fast work of the Russian FSB.

See also this TASS report titled Perpetrator of Darya Dugina’s murder to be put on wanted list for extradition to Russia. Of note:

MOSCOW, August 22. /TASS/. Ukrainian citizen Natalia Vovk, identified as the perpetrator of the murder of Russian political scientist and journalist Darya Dugina in the Moscow Region, will be put on the wanted list and her extradition to Russia demanded, a source in the law enforcement has told TASS.

“Ukrainian citizen Natalia Vovk, who escaped to Estonia after committing the murder of Darya Dugina, will be put on the wanted list and her extradition demanded,” the official said.

Vovk is presumed to be a member of the Azov battalion.

The car bombing outside Moscow on Saturday night, which took the life of journalist Darya Dugina, was orchestrated and carried out by Ukrainian secret services, the Russian Federal Security Service (FSB) has said.

Dugina was killed while returning from a conservative family festival held in the Moscow Region. She was the daughter of anti-Western author and political commentator Aleksandr Dugin. Like her father, she was known for her vocal support of the Russian military operation in Ukraine.

In a statement on Monday, the FSB said that Ukrainian national Natalya Vovk, born in 1979, carried out the bombing.

According to the FSB, Vovk arrived in Russia with her teenage daughter on July 23 and rented an apartment in the building in Moscow where the victim also lived.

Vovk and her daughter attended the ‘Tradition’ festival on Saturday, where Dugin was giving a lecture and his daughter was present, the FSB said.

Investigators stated earlier that a bomb was planted under the Toyota Land Cruiser Prado SUV Dugina used to leave the event. According to the FSB, Vovk detonated the bomb remotely, killing Dugina as she was driving on a highway. She then left with her daughter for Estonia on Sunday.

On August 21, a car Darya Dugina was driving exploded MOSCOW, August 22. /TASS/. The murder of Russian journalist Darya Dugina has been solved, Russia’s federal security service FSB has said. It was prepared by Ukrainian secret services. The perpetrator – a citizen of Ukraine identified as Natalia Vovk – escaped to Estonia, the FSB’s public relations center stated.

“As a result of urgent detective measures, the federal security service has solved the murder of Russian journalist Darya Dugina, born in 1992,” the FSB stressed. The special service found that “the crime was prepared and committed by Ukrainian secret services.” Its perpetrator was identified as a citizen of Ukraine, Natalia Vovk, born in 1979.

She had arrived in Russia on July 23, 2022, together with her daughter Sofya Shaban, born in 2010. “On the day of the murder, Vovk and Shaban attended the literary and music festival Tradition, where Dugina was present as an honorary guest.

On August 21, after a remote-controlled explosion of the Toyota Land Cruiser Prado car Dugina was driving, Vovk and her daughter left through the Pskov Region to Estonia,” the FSB said.

To plot the murder and gather information about Dugina’s lifestyle, Vovk and her daughter rented an apartment in Moscow in the same building where the victim lived. To spy on the journalist, the criminal used a Mini Cooper car. When entering Russia, the vehicle carried a license plate of the Donetsk People’s Republic – E982XH DPR, in Moscow – a license plate of Kazakhstan 172AJD02, and when leaving – a Ukrainian license plate AH7771IP. “The materials of the investigation have been handed over to the Investigative Committee,” the FSB said.