News Ticker
That the Swedish investigation into the rape allegation against Julian Assange is being re-opened is something that ought to be welcomed. The alternative would be for this accusation to hang unresolved over Julian’s head forever. The Swedish prosecutors now need finally, as my father used to say, either to piss or get off the pot. They need to decide whether there is sufficient evidence to charge or not.
.
There is no reason for delay. The Swedish police have had seven years to investigate this case and all the evidence has been gathered and all statements taken – the last being the interview of Julian Assange in the Ecuadorean Embassy in 2017. Hopefully to review the evidence and decide whether to charge will not now be a lengthy procedure. It is worth noting, contrary to much misreporting, Julian Assange has never been charged with anything in Sweden.
.
In the event that Sweden does wish to try to extradite, that should take precedence over the US request. There are three good reasons for this. Firstly, rape is by far the more serious alleged offence. Secondly, the Swedes entered the process many years before the Americans. Thirdly, the European Arrest Warrant is a major multilateral arrangement that is much more important than the discredited bilateral extradition treaty with the USA.

None of the above detracts from the many problems with the Swedish prosecution: Sweden’s Chief Prosecutor decided no offence had been committed and the case should be closed after the initial investigation before another Prosecutor decided to reopen the case, as is possible under the Swedish 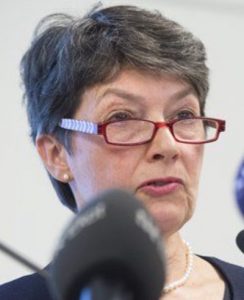 system. That prosecutor, Marianne Ny (pictured), herself decided to close the case in 2013, and was instructed not to by the British Crown Prosecution Service in a series of emails which the CPS attempted to hide and some of which had been destroyed. Ms Ny also admitted to destroying communications from the FBI, and ultimately admitted to having destroyed the entire case file.

That is before you get to the problems with the Swedish judicial system, where rape trials hear all evidence entirely in secret – there is no jury, and two of the three judges are political party appointees.

Plainly, as always in cases involving Assange, there are plenty of reasons to be concerned about the impartiality of state justice. The United Nations has already condemned the disproportionate sentence given to Assange for breaking bail conditions and his being held in a maximum security prison. It has gone virtually unremarked by the MSM that the Ecuadorean government has, entirely illegally, handed all of Julian’s possessions over to the USA.

Plainly this is a long and difficult fight to save Julian from entrapment and permanent imprisonment. But the Swedish calumny not being simply left hanging is a necessary step in that fight. 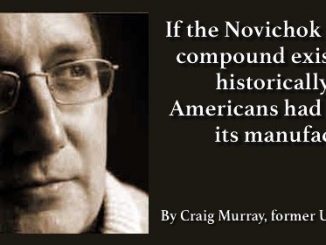 The Novichoks Story Is Indeed Another Iraqi WMD Scam 311

Dr. Knut Wittkowski Strikes Again: ‘We could open up again and forget the whole thing’