ER Editor: We recommend this piece by Joe Lauria for Consortium News titled Giuliani Says Assange Should Not Be Prosecuted.

For an update, we also recommend this piece by James Cogan for WSWS titled Silence follows Trump attorney’s statement that Julian Assange did nothing “wrong”:

Predictably, not a word about Giuliani’s statements has been said by the political and media establishment in the US, Europe or Australia.

The silence in Australia is of particular significance. Assange is an Australian citizen. In the face of persecution by the governments of other states, he has always been entitled to, but denied, the full diplomatic, legal and political support of the Australian government.

The categorical statement by a figure as repellent as Giuliani, that there are no grounds to prosecute Assange, serves only to expose the perfidy of the current Liberal-National Party Coalition government, the Labor Party, the Greens, as well as the media, the trade unions and civil liberties organisations. Their refusal to defend Assange testifies to the utter rot of democracy in the country. President Donald Trump would do well to listen to Rudy Giuliani, one of Trump’s Russiagate investigation lawyers, concerning the propriety of prosecuting Julian Assange of WikiLeaks, who has lived in the Ecuador embassy in London since 2012 to avoid extradition to the United States. Interviewed Sunday at the Fox News show Fox & Friends, Giuliani made it clear that he believes Assange should not be prosecuted for the publishing of US government information. Assange took part in First Amendment-protected activity, Giuliani explains, as did the New York Times and the Washington Post decades earlier when they published the US government’s Pentagon Papers containing many revelations about US activities related to the Vietnam War.

Here is Giuliani’s discussion of the matter in the interview:

It’s a First Amendment issue, right? It isn’t stolen property. I mean, it is stolen property, but it has a different nature when it’s information. So, let’s take the Pentagon Papers. The Pentagon Papers were stolen property, weren’t they? They were stolen from the Pentagon — given to the New York Times and the Washington Post. Nobody went to jail in the New York Times and the Washington Post. We’ve had revelations during the [George W.] Bush administration — Abu Ghraib, all of that. It’s stolen property, taken from the government against the law. Once it gets to a media publication, they can publish it. They can publish it for the purpose of informing people. You can’t put Assange in a different position than that. He was a guy that communicated. We may not like what he communicates, but he was a media facility, he was putting that information out. Every newspaper, station grabbed it and published it.

Giuliani’s reasoning in the interview is similar to the reasoning New York Times Deputy General Counsel David McCraw offered when he told judges at the US Ninth Circuit’s annual judicial conference in July that he thought Assange is “sort of in a classic publisher’s position” and that “the law would have a very hard time drawing a distinction between The New York Times and WikiLeaks.”

Hopefully, the president will hear this sound, liberty-advancing reasoning, whether from Giuliani or someone else, and make a public and binding assurance that the US government will not seek the arrest, prosecution, or punishment of Assange.

Relevant section begins at 8:25 for 2 minutes 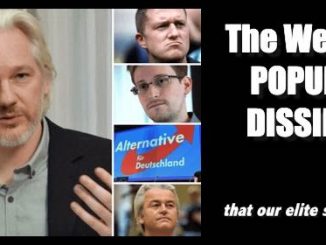 Rise of the Western Populist Dissidents

Appeal by Medical Doctors About the Plight of Mr. Julian Assange