ER Editor: In late 2020, an independent French documentary film maker, Pierre Barnerias (pictured), made an incredibly long and stunning documentary called Hold Up. It would have a sequel. It was remarkable for having explored elements of the Covid plandemic, during 2020, with an impressive array of 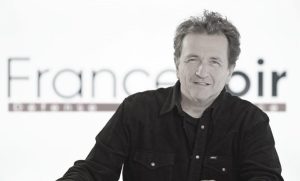 experts from France and from the English-speaking world. Barnerias had ‘gone to the very top’, so to speak, for his authoritative opinions, trying to make sense of the entire landscape. It was a sort of early documentary version of what Dr. Reiner Fuellmich would later do through legal avenues.

Barnerias’ experts included people such as Prof. Michael Levitt, Catherine Austin Fitts, French geneticist Alexandra Henrion-Caude, former head of France’s vaccine program Prof. Christian Peronne, researcher Prof. Luc Montagnier, researcher and pharmacist Prof. Jean-Bernard Fourtillan, etc. As we recall, Fourtillan went on camera showing a patent with the Rothschild name on it. An outspoken, brilliant man, he discovered that the hormone valerian (named after his daughter) could be found in the pineal gland, that melatonin wasn’t the only game in town, and that conditions could be treated successfully by modifying people’s valerian levels. He was shut down, of course, by Pharma, which is incredibly powerful in France. He was later put in a French psychiatric facility, only to be rescued on the quiet by a handful of French military personnel.

Within a mere number of days following the documentary’s release, French MSM did a hatchet job on it. The lightning speed of its response, as well as the talking heads employed to do this hatchet job, told us what a threat this excellent documentary was.

Now, one of the MSM establishment figures, Fabrice Fries, CEO and publication director of Agence France Presse, gets legally held to account for publicly using defamatory shut-down terms like ‘trompeur’ (deceptive, misleading, false). And he’s a former magistrate … If you want to see how this documentary has been summarily dismissed, check out the brief Wikipedia entry for it. It’s truly a howler.

If there’s any kind of fair trial and media publication of the evidence, it should be interesting to see what revelations – truthful ones – will come out as Fries will be forced to justify what he declares to be ‘misleading claims’ made by Barnerias.

Fabrice Fries, CEO and publication director of AFP, indicted for an incriminating article against the documentary Hold-up

This Friday, October 21, according to our information, FranceSoir learned that Fabrice Fries has been indicted for public defamation following a complaint following an incriminating article published by AFP (ER: on March 10, 2021 – browsers will translate) against the documentary “Hold-up” directed by the producer and journalist Pierre Barnérias. Also according to our information, it is highly likely that this action will lead to a trial.

Consequently, a legal debate could therefore take place around the accusations contained in this article devoted to the documentary Hold-up, decreed and presented as false and misleading by AFP. In this context, to escape a possible conviction, Fabrice Fries would then have to provide proof of the truth of what is expressed in this article.

Fabrice Fries, enarque (ER: meaning he’s a graduate of the ‘top’ university in France which produces the next generation of political leaders and administrators; Macron is one), former magistrate at the Court of Auditors and former president of Publicis Consultants, is close to the spheres of power. In 2018, he was appointed CEO of AFP (Agence France Presse) following a controversial vote in which the state was involved. After the election of Mr. Fries, the only candidate in the running to take the helm of the agency against Emmanuel Hoog, outgoing CEO, three members of the AFP Board of Directors had alerted the Minister of Culture, Françoise Nyssen, of the risks of this appointment for a company which “plays an essential role in the quality of information” in France and abroad.

Benefiting from experience in managing a press company – he had been CEO of Medimedia and Aprovia, two companies resulting from the sale of Vivendi’s professional press activities, Fabrice Fries contributed to the diversification of the company’s income by developing AFP Factual, a fact checking service.

In November 2020, producer and former journalist Pierre Barnérias released the documentary film Hold-up. This film, financed by more than 5,000 Internet users through a crowdfunding campaign, sparked controversy: almost all the French media will treat it as a “conspiracy documentary”.

The journalist had come to the FranceSoir set to answer our questions as part of an essential Interview about Hold-up and its Hold-Out sequel: “The debate prevented around the Covid”.

Contacted today by email, Fabrice Fries has not yet responded to our request.

Will Macron’s Involvement in The Uber Scandal Sink Him?