Britain is now on a count-down to the so-called Brexit Vote on June 23. Recent polls run by the Guardian show that 52% of respondents are in favor of leaving the EU as compared with 45% back in May.

Three of the biggest pro-Brexit campaigners, Boris Johnson, Michael Gove and Priti Patel are now saying that the UK will adopt an Australian-style points system for all new immigrants in a post-Brext Britain.

The Australian system favors admitting skilled migrants who can respond to a need in the country’s labor market. Applicants are awarded more points for being of a younger age (those aged 25-32 earn the most points) and possessing a higher level of English language proficiency (a basic level is required for all applicants). University qualifications earn more points as does offering job skills in occupations that appear on an approved list of needed jobs. Skilled applicants make up approximately 68% of all migrants admitted annually to Australia.

As the situation currently stands under EU membership, the UK has no ability to shape an immigration policy.

Enjoy the full report in the Guardian.

European migrants coming to the UK will have to prove that they can speak good English and be subject to an Australian-style points system if Britain votes to leave the EU, according to Boris Johnson, Michael Gove and Priti Patel.

The three leading Conservative out campaigners, who all sit in David Cameron’s main or political cabinet, have issued a joint statement about the rules they would want to implement in a post-Brexit Britain.

“By the next general election, we will create a genuine Australian-style points-based immigration system. The automatic right of all EU citizens to come to live and work in the UK will end, as will EU control over vital aspects of our social security system,” they write.

Claiming that the changes will create a level playing field for EU citizens and those coming from Commonwealth countries, they add: “Those seeking entry for work or study should be admitted on the basis of their skills without discrimination on the ground of nationality. To gain the right to work, economic migrants will have to be suitable for the job in question. For relevant jobs, we will be able to ensure that all those who come have the ability to speak good English.”

However, they insist there will be no change for Irish citizens who will still be able to travel freely into the UK, despite warnings that it could offer a back door for EU migrants, and that EU citizens already in the country will be granted indefinite leave.

Gisela Stuart, the Labour co-chair of the Vote Leave campaign, would not say, however, whether the Australian point-based system would lead to a cut in migrant numbers. She told BBC Radio 4’s Today programme that the numbers would depend on the needs of the British economy. Currently, she said, the UK had no control over immigration policy because of its EU membership.

However, the TUC general secretary, Frances O’Grady, said a TUC report showed that leaving the EU would be a “disaster” for British workers who would be £38 a week worse off outside the EU by 2030. She also dismissed the claim, repeatedly made by leave campaigners, that they represent the interests of workers who have lost out most through mass immigration.

“They’re not promising to reduce immigration at all; in fact, I think this whole debate is a big con,” she said. “I don’t recall many of the prominent leave campaigners standing up for the working poor when it came to the pay cap on 6 million public service workers, or indeed the cuts to working tax credits. So I think we take the idea that they’re champions of the working poor with a shovelful of salt.”

The intervention on immigration, which comes a day after Johnson and Gove claimed that they would use money clawed back from the EU to cut VAT on fuel bills, appears to be an attempt to offer voters the idea of an alternative Tory government after the 23 June referendum.

On Wednesday, the Conservative campaigners will try to build on the statement, by making the case across the country on the Vote Leave battlebus.

As well as talking about those coming to work, they accuse the EU of allowing people smugglers to exploit the refugee crisis on Europe’s border, saying that they are “failing to tackle this trade in human misery”.

The group concede that immigration is culturally, socially and economically enriching for Britain but say the public needs more reassurance and that membership of the EU prevents control. In particular, they highlight pressure on class sizes and hospitals.

But remain campaigners said the proposal would take Britain out of the single market, wrecking the economy and potentially triggering more immigration. They said the thinktank Migration Watch had said the points-based system would be “totally unsuitable for the UK”.

Will Straw, the executive director of Britain Stronger In Europe, said: “This system will not work … Australia, who have a points-based immigration system, have twice as many migrants per head as the UK. Economic experts are agreed that leaving the single market would lead to recession – costing jobs and raising prices.”

Analysts have warned a Brexit vote could hit Britain’s property market for years as figures showed a slowdown in annual house price growth last month. Howard Archer, the chief UK and European economist at IHS Insight, said a Brexit vote could dampen activity for at least the next two years.

“A potential major downside risk to housing market activity and prices comes from the vote on EU membership on 23 June,” he said. “A vote to leave the EU would be liable to see a marked hit to UK economic activity over the rest of this year and in 2017 amid heightened uncertainties, which would likely weigh down heavily on the housing market.”

TLB recommends other articles by the Guardian 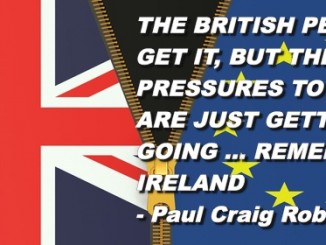 Despite the Vote, the Odds Are Against Britain Leaving the EU