Now it’s Sweden’s turn to join the NATO neocon warmongers in preparation for a world war that is this close to starting. Not that you would know this from the mainstream media. The reason? Russian aggression, especially in Ukraine, according to Swedish Defence Minister, Peter Hultkvist – it’s their fault.

Last month, John Pilger in a sobering piece titled ‘A world war has begun. Break the silence.’ writes  about the huge US military buildup that is taking place in Europe and in the coastal waters around China. Writes Pilger,

In the last eighteen months, the greatest build-up of military forces since World War Two — led by the United States — is taking place along Russia’s western frontier.  Not since Hitler invaded the Soviet Union have foreign troops presented such a demonstrable threat to Russia.

Ukraine – once part of the Soviet Union –  has become a CIA theme park. Having orchestrated a coup in Kiev, Washington effectively controls a regime that is next door and hostile to Russia: a regime rotten with Nazis, literally. Prominent parliamentary figures in Ukraine are the political descendants of the notorious OUN and UPA fascists. They openly praise Hitler and call for the persecution and expulsion of the Russian speaking minority.

This is seldom news in the West, or it is inverted to suppress the truth.

In Latvia, Lithuania and Estonia — next door to Russia – the US military is deploying combat troops, tanks, heavy weapons. This extreme provocation of the world’s second nuclear power is met with silence in the West.

What makes the prospect of nuclear war even more dangerous is a parallel campaign against China.

Seldom a day passes when China is not elevated to the status of a “threat”.  According to Admiral Harry Harris, the US Pacific commander, China is “building a great wall of sand in the South China Sea”. 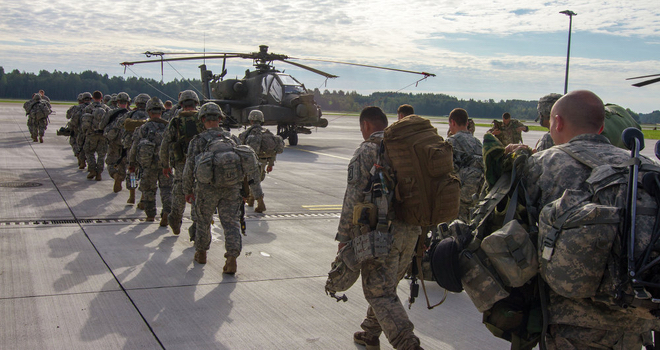 Now Sweden has let its arm be twisted by Washington, having signed a so-called Host Nation Support Agreement, which would let NATO park its weaponry and conduct military training exercises on Swedish soil. This signalling a move away from traditional Swedish neutrality.

The organization Stop NATO in Norway has responded with its own press release, published in Global Research, lamenting the increasing risk of war such a move represents, the risk of losing national sovereignty, and diverting public money away from social programs to arms buildup at NATO’s behest.

This is a press statement from the organisation Stop NATO in Norway, regarding Sweden’s recent decision to sign a Host Country Agreement with NATO:

On May 25th Riksdagen (the Swedish National Assembly) sacrificed the Swedish neutrality policy by joining the NATO Host Country Agreement. This happened almost without any public debate. Popular protests and 41 300 signatures have been swept aside by Riksdagen.

The Agreement makes Sweden a possible host country for aggressive NATO exercises during peacetime. In addition, the Swedish government may allow NATO to invade the country if a crisis or a conflict should occur. Inevitably, Sweden will become directly involved in NATO’s armament proliferation and their aggressive provocations against Russia. Large-scale fleet exercises in the Baltic Sea will further increase the danger of confrontation and war.

This is not only a tragedy for Sweden; it increases the arms race and the danger of war throughout Europe. The fact that Sweden has been staying out of military alliances until now, has been a stabilizing factor throughout Northern Europe. The Swedish submission to NATO may spell the end to peace in the Nordic region.

Forcing Sweden and Finland into the military alliance has been an aim for NATO and the United States for a long time. The governments of Denmark and Norway have been henchmen in this filthy game. The appointments of Anders Fogh Rasmussen and Jens Stoltenberg as Secretary Generals have been part of a strategy to coerce and bribe Sweden and Finland into joining the alliance.

Stop NATO in Norway feels obliged to alert our Swedish brothers against the consequences of becoming a slave to NATO and the United States. If the goal is safety and peaceful coexistence in the Nordic region, NATO offers the opposite. NATO has turned Norway into a front-line for US nuclear strategy and a spying central in the Arctic region. In reality, Norway has no foreign or security policy of its own. Norwegian special forces are being deployed into aggressive military operations against peoples and states that have never threatened our country – like in Afghanistan, Libya and now in Syria. Norwegian social spending is cut back while our tax money is being spent on an unrestrained build-up of offensive weapons of war, because NATO demands it.