From time to time, ER republishes articles by World Socialist Website for the quality of their analysis of current events. Such an article has been republished below. I personally wish to state, however, that ER does not advance the utopian view of international socialism (recommended at the end of this article), which at rock bottom is no more than the long-term aim of the globalist financiers – using different language, of course – who want to impose on us a New Economic World Order via harsh neoliberal economic policies including austerity for citizens, free trade agreements, mass privatizations, free movement of capital, etc. while trying to pull us in with pseudo-left concerns that ultimately work to divide us and create chaos on the social level (gender issues, mass migration and open borders, multiculturalism, etc.). Nor do we support any kind of class analysis (working class vs bourgeoisie) that similarly turns us into enemies of each other. Globalist financiers and the elite families who back them are the problem, we believe, not the ordinary citizen. That is not to impugn the intentions of the WSWS; it is simply to endorse excellent research into the socialist agenda, which reveals it to be part of the gameplan of the liberal financial elite who have a global agenda (see for example ‘The Milner-Fabian Conspiracy: How an international elite is taking over and destroying Europe, America and the World‘ by Ioan Ratiu).

Schwarz and London’s analysis below is particularly pertinent for the role of the French trade unions and the way they have been sold out to the elite agenda; working people thus have their jobs cut out for them to form an effective opposition to this Rothschild-endorsed neoliberal government.

Many different sectors of the working class in France began massive strikes this morning, after railroad workers stopped work last night. Rail workers opposed to French President Emmanuel Macron’s proposal to privatize the state-owned rail company SNCF are leading what has been called the biggest test of strength to date between Macron and the French working class.

Le Figaro labelled the strike “the railroad battle,” while Le Monde wrote in worried tones that “Train, airplane, and garbage workers once again have energy.” It continued: “A number of sectors have been affected by a strike movement launched Tuesday, April 3. Their grievances are numerous within each category: Reform of the SNCF for railroad workers, demands for wage increases for Air France workers.”

The SNCF expects the strike call to be followed widely. It anticipates that only one in eight high-speed TGV trains will run across France and only one in five regional trains. Initial reports indicate that eight in ten conductors are following the strike. Up to a third of flights will be cancelled today and electricity maintenance and garbage pickup will be limited as sanitation workers, electricians and gas workers halt work.

Le Parisien is concerned that the strike “will be very widely followed.” There are increasing concerns within the trade unions and the bourgeois parties that the strike movement 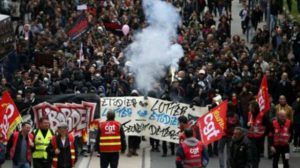 will link up with on-going strikes of postal workers in Hauts-de-Seine, the Gironde and Rennes. Workers at the retailer Carrefour also struck last weekend against job cuts.

Four trade unions—the General Confederation of Labour (CGT), the National Union of Autonomous Unions (Unsa), the French Democratic Confederation of Labour (CFDT) and the Solidaires Unitaires Démocratiques (SUD)—have called for job action against privatization proposals. Under immense pressure from their members, the unions, though refusing to call an outright indefinite strike, will alternate between two days of strike action and three days of work at SNCF until 28 June. The trade unions are portraying this as an attrition tactic and a means to protect strikers, who in France receive no strike pay.

The strike has raised concerns across Europe, where the German, English and Spanish bourgeoisies face increased strike activity. In Germany, home to a series of late-winter “warning strikes” by industrial workers, the weekly Die Zeit wrote that the French strike will decide “if [railroad privatization plans] go no further than mere intentions and Macron bows in the face of resistance from the streets, like many of his predecessors, or, if France will in fact change.”

In the United Kingdom, where teachers are preparing a national strike vote and university lecturers have been on strike for weeks, the Financial Times called the French strike wave “the strongest test yet for President Emmanuel Macron’s reform agenda.”

Macron’s “reform” and “modernisation” plans mean the elimination of social programs and rights won by the French working class over decades of bitter struggle.

Last year, the Macron government passed a labour market reform that paves the way for mass layoffs and expands precarious working conditions. Macron and the other bourgeois parties demobilised and suppressed the mass opposition to this law with the assistance of the trade unions and attacks by the police.

Macron’s latest privatization efforts are the most ruthless yet. The key project is the restructuring of SNCF. The French ruling class seeks to eliminate the “employee statute” that provides workers with layoff protection and the option of early retirement—a high water mark of the class struggle in Europe in the course of the 20th century. 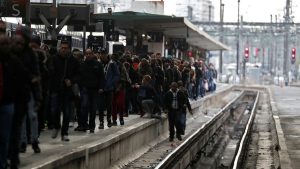 The government wants to divide the state railway company into three shareholder companies—network, rail operations and railway stations—and open it up to international competition. SNCF’s expenditure is to be cut by 27 percent on the backs of the employees, and its debt of €50 billion ($61 billion) reduced.

The strike recalls the events of 1995, when railway workers shut down the country for three weeks and compelled conservative Prime Minister Alain Juppe to withdraw a proposed pension reform. This time around, salaried employees are involved in the strike alongside the workers.

Simultaneously with his attack on railway workers, Macron is planning to substantially cut public-sector jobs and reform unemployment insurance, forcing jobless workers to accept new employment under the threat of severe financial penalties. The government is also proposing an education and training reform that will make university education more expensive and more difficult to obtain.

Strike action is also taking place at the airline Air France for a 6 percent pay increase. After a one-day strike on Good Friday, the trade unions called for further strikes today and on April 7, 10 and 11.

Air France expects that a third of long- and mid-distance flights will be cancelled today, as well as 15 percent of short-distance flights. Since the rail system will also largely grind to a halt, chaos and traffic jams are expected on the roads.

Macron, his government, and his party La Republique en Marche (LRM) have thus far shown their determination to resist the strike movement. “We expect a very wide-ranging, strong social movement with tough consequences for rail customers,” stated a government source, according to Le Point magazine. “That makes it all the more important that we hold fast to our chosen course.”

On 14 March, the government adopted an enabling law that permits it to implement the reform of the SNCF swiftly and, if necessary, by decree. It will first be passed in parliament, where the government party enjoys a majority.

The government is relying above all on the trade unions to carry through its attacks. The unions have no interest in causing trouble for President Macron, whom they supported in last year’s election. They assisted in the passage of the labour market reform and have decades of experience in dividing and demobilising militant working-class struggles.

However, some commentators doubt whether Macron is strong enough to resist the growing movement. The article already cited in Die Zeit pointed out that “the backing for his agenda in the population is not as strong as his election result would suggest.”

In the first round of the 2017 presidential election, “75 percent voted for other candidates,” the newspaper noted, and in the subsequent parliamentary elections, “his party, La Republique en Marche,” required “support from just 13 percent of eligible voters for an absolute majority due to the French majoritarian electoral system and low voter turnout.”

It is also by no means certain that the trade unions will succeed in holding the workers’ anger in check. The strike movement in France is part of an international offensive by the working class—teachers in the United States, lecturers at universities in Britain, Sri Lanka, Algeria, Tunisia and Kenya, industrial and public-sector workers in Germany, Amazon workers in Spain, and other sections of workers internationally.

The pseudo-left plays the chief role in directing the growth of social opposition into the safe channels of the bourgeois political establishment. In France, the New Anti-capitalist Party (NPA) issued a public statement on March 19 demanding that workers “unite” behind the former leadership of the Socialist Party (PS), the very party that under President Francois Hollande carried out the attacks on wages and social programs that set the stage for Macron’s round of attacks. The NPA’s Léon Crémieux praised his party for taking “the initiative of a political appeal…bringing together forces ranging from [anarchist] Libertarian Alternative to [2017 Socialist Party presidential candidate] Benoit Hamon, via [Jean-Luc Mélenchon’s] Unsubmissive France.”

This is a death sentence for the growing strike movement by workers. The demands of workers everywhere will be met only when they overcome the restrictive nationalist perspective of the trade unions and bourgeois parties and construct rank-and-file committees to link their struggles in an international movement for socialism.

Image of protestors, source with thanks 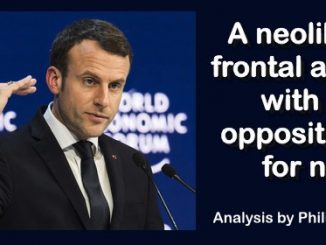 The Moral Degeneracy of Sacrificing Children on the Altar of Covid 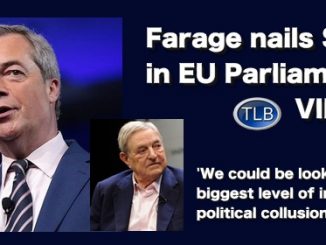