So many questions arise from this piece, such as “What is a Conservative these days?”, “How many illegals are there REALLY in the UK?” and “Who are Boris Johnson’s paymasters?” Johnson’s pro-Brexit supporters as demonstrated on FB are a pretty virulently anti-Left group who certainly don’t want any sort of 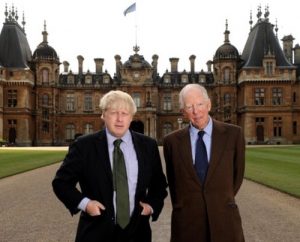 amnesty for people residing illegally in the UK. And a significant number of the population polled – around 77% – see illegal immigration as a problem, period. Wasn’t a key part of Brexit obtaining control over the borders and therefore control over social spending and employment?

Migration Watch UK is right to raise the alarm on this issue. If there are only an extra million people in the UK illegally, then that still gives rise to no end of social welfare costs over time, plus the family reunification problem and its attendant costs. One million quickly becomes three or four or more. But more alarmingly, we published a piece in July of last year on just how many illegals there might be in the UK since the government has admitted to not keeping figures and hasn’t been tracking who exits the country since the late ’90s. (How very convenient if your plan is to flood the country with cheap workers and crash the welfare state!) Titled The Truth About Britain’s Migrant Numbers – Is The Population Closer to 80 Million?, in sum, back around 2007-2008 the corporations who sell food items throughout the nation estimated the UK population to be closer to 80 million based on consumption patterns when, in fact, the government was peddling 61 million as the official figure. Another source also confirmed this as an approximate number. Note the years quoted – 2007-8.

Britain’s new Prime Minister, Boris Johnson, stated that he is open to amnesty for illegal immigrants residing in the UK. He stated that the legal position of removing about half a million people who have not been involved in any criminal activity at all is “anomalous,” and that the “law already basically allows them an effective amnesty.” Critics believe that there could be up to one million illegal aliens in the UK, and they dispute the reportedly low crime rate. Migration Watch UK says that amnesty will reward illegality and encourage more illegal immigration in the future. Amnesty is unpopular as a 77% majority of the British public believes that immigration is a problem. Subsidized social housing costs for the poor will skyrocket with amnesty.
********

Migration Watch UK has launched an official petition against Boris Johnson’s proposal to give amnesty to hundreds of thousands of illegal migrants.

Boris Johnson told the House of Commons on Thursday (ER: July 25) that he favours an illegal migrant amnesty, and that his government will be looking at “the economic advantages and disadvantages” of issuing one.

Following his first statement to the House of Commons as Prime Minister, the Tory leader was reminded that he had “courted popularity with pledging an amnesty for illegal immigrants” as Mayor of London by Labour’s Rupa Huq, who asked him if he would now be “a man of his word” and deliver on it.

Johnson readily conceded that “[on] amnesty on illegal immigrants, it is absolutely true that I have raised it several times” and that “it did not receive an ​overwhelming endorsement from the previous prime minister when I raised it once in Cabinet” as Foreign Secretary — but that it was back on the table now that he was in charge. 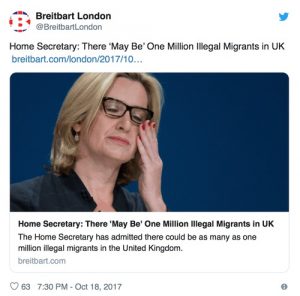 “I do think that our arrangements in theoretically being committed to the expulsion of perhaps half a million people who don’t have the correct papers and who may have been living and working here for many, many years without being involved in any criminal activity at all… I think that the legal position is anomalous,” he said — with “people who don’t have the correct papers” being a reference to people who have entered or stayed in the country illegally.

“[W]e need to look at our arrangements for people who have lived and worked here for a long time unable to enter the economy, unable to participate properly or pay taxes without documents,” he continued — casting his earlier suggestion that the people he was referring to hadn’t been involved in “criminal activity” into some doubt.

West Point Tackles ‘Toxic Masculinity’ And We Should Be Very Alarmed

Coronavirus: Legal Raids in Progress at the Homes, Offices of Several French Ministers