The results of the first round of the French Presidential election was almost split evenly between Emmanuel Macron of En Marche! (EM!) and Marine Le Pen of National Front. Macron grabbed 23.75 percent of the votes, while Le Pen received 21.53 percent. The old guard establishment parties have failed, for the first time in decades, to maintain their grip on power.

The result of this election in France from my point of view is not good news for France, for Europe and for Russia. Mr. Macron, everybody forgets this thing, because the result, the campaign, the marketing, but the fact is [he] is the baby of Mr. [Francois] Hollande. So it will be exactly the same policy… When he was the minister of the economy he didn’t make any good reforms; it’s only a marketing baby of Mr. Hollande.

Europe needs big, big reforms. The majority of the people in France more and more are against Europe. It’s a pity. So we have to reform Europe. I don’t think he is on the way to do it…

For the relations [with] Russia, Moscow, we need to stop this atmosphere of Cold War. We need strongly to stop these sanctions. France needs to be the leader of this diplomacy in Europe. And we know that Mr. Macron, as opposition is completely the same as Mr. Hollande and the Socialist government and are completely aligned with the United States. It’s not good news for international policy today. 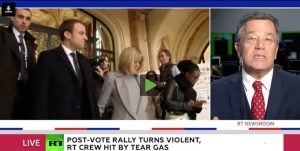 The fact that the whole French establishment – international capital, the banking and the stock markets – all rallied on the outcome of the election yesterday in France. That demonstrates that Macron is the establishment candidate, and he will deliver a very weak France, which is exactly what Brussels and Berlin want…

We’re talking about a high probability, which is acknowledged by all the capital markets, that Marine Le Pen will lose. The whole establishment – the right and left – is throwing its weight behind Macron. So it is a foregone conclusion that he will win, and nobody is sweating in Brussels … The French people are being denied a genuine government. They are going to receive a non-entity president, just as Hollande was a non-entity president. They are going to receive a puppet to Berlin, and they are going to receive further sacrifices to their economy because they are incapable of carrying out the substantial reforms they need. 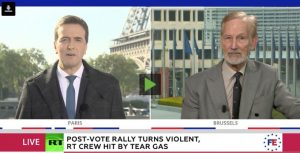 It is an extraordinary adventure. When he [Macron] started one year ago nobody gave him one change because he was alone, he started and he went up, up, up. And you have to see that the two main political parties that have run France for the last 40 years have been beaten – do not appear in the second round. It is a huge political shock.

We have something important in French politics, as in the United States, primaries. These primaries apparently killed the two main parties – that was the right-wing party, Union Populaire Republicaine (UPR) and the old party, Parti Socialiste (PS) The candidates didn’t make it. Why? [Benit] Hamon did really a bad, bad campaign – he didn’t seem presidential at all. [Francois] Fillon had a problem. It was discovered he had employed his wife with public money – she was employed in the National Assembly as his assistant. There was a huge campaign in France, with people saying: “You stole public money, you cannot be a president …” 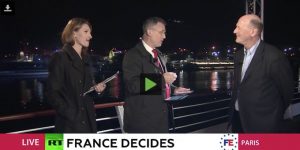 We’ve seen the total collapse of France’s traditional parties. That is the center-right and the center-left. They’ve both gone down the drain. Particularly Francois Fillon, who was a very capable and seasoned politician. It looked like he was going to win for a while, but then he was undone by the scandal. They have Macron, who’s a big unknown. He’s come out of nowhere. He worked at the Rothschild bank, which has a lot of people wondering how much they are behind him. He is amiable, he is likable, he’s bland; women like him. It is very hard to say. And then there is this firebrand, Madame Le Pen, who scares a lot of French. She certainly scared the French financial community almost to death…

[A Le Pen victory] would mean the collapse of the EU probably. She’s about to pull out, and the collapse of the euro that would put Europe in absolute chaos. That is fine with Mr. Trump. He has been lauding Madame Le Pen, and a lot of French call her the ‘American Trump.’ But Trump is not very sophisticated in the needs or the demands of European policy, and frankly, he doesn’t care much about Europe. 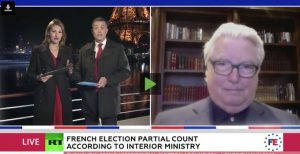 Hugh Bronson, member of the Berlin state parliament for the Alternative for Germany Party

[There are two main reasons for Le Pen’s success in the first round of French Presidential elections.] There is a huge dissatisfaction with the political situation in France and the political situation in Europe. People expressed that. They want to have a complete change. They want to have a completely new face; they don’t want to carry on with the old system. That is one of the reasons Le Pen got such support from the French people …

The other one is the complete failure of the established parties to address the real worries, the real questions that people have. They were not answered, they were not provided with the right support. All this shows in tonight’s result …

The riots [we’re seeing on the streets today] are just an expression of general frustration. The protest wasn’t aimed at a single candidate, or even two candidates – they rejected all eleven who were standing for the presidency. It is general uproar. 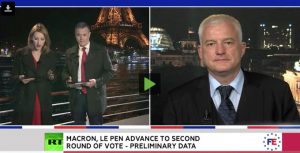