Ruling Britannia: The Evidence that Britain is Legislating its Way to Authoritarianism

During the short course of the 21st century, Britain’s ruling class has pushed its democracy in a direction where the expansion of state powers is undeniably leading the country towards authoritarianism.

The United Nations privacy chief has called the situation “worse than scary.” Even UK courts judged that the activities of the government was in breach of human rights law, so legislators put forward Bills to legalise it. Apple CEO Tim Cook was particularly critical, noting that new laws would have “dire consequences” if introduced, which they were. Harvit Kambo a director at Privacy International said:

“It’s sad that the Snowden revelations backfired so spectacularly in Britain. Rather than rolling back powers, they’ve been used to legitimise these practices.”

Britain is now regarded as an endemic surveillance society. It is run, not by honourable men and women looking to serve their country but by a pack of snarling wolves, ensuring the flock never steps out of line. But surveillance is just the start and where it starts is just as alarming.

Just think about the evidence for a minute. Authoritarianism is defined as: “the enforcement or advocacy of strict obedience to authority at the expense of personal freedom.” We already have much of this statement in Britain. In 2014 it was estimated by government that one million school pupils had been biometrically finger-printed. But as it turned out, on further private investigation through Freedom of Information requests, the best guesstimate of the 8.2 million attending school was that 6 million were on a biometric database of some sort starting from the age of just four – and that was 10 years ago. By now one would expect that number to be close to 100% with facial recognition and other more recent technologies.

“Imagine a country in which the state has access to all the personal communications of all citizens and, thanks to this official mastery of the electronic environment, access also to all personal files and photographs, which it can survey without a warrant and at the whim of the police and secret services, whose penetration by corporate corruption is well documented. Imagine the authorities of this country then passing legislation which gives those same authorities the right to claim any issue that exposes the behaviour or mis-behaviour of those same authorities to be an issue of ‘national security’ which cannot be exposed in court. Who could we be talking about? Putin’s Russia? The ‘new’ China? They should be so lucky. Say hello to a Britain ruled for the first time in living memory by a government forged with the support of Liberals.”

High-level Stasi functionaries pose for the camera in 1970’s. One of its main tasks was spying on the population, mainly through a vast network of citizens turned informants, and fighting any opposition by overt and covert measures. It had 80,000 full-time operatives spying on 16 million citizens – far less of a capability than the British gov’t has given itself in just 15 years over its own population.

Since the year 2000 Britain has seen a whole raft of laws designed to transfer power from the people to the state. We’ve had RIPA or the ‘Snoopers Charter’ and the Investigatory Powers Act giving unprecedented and extreme surveillance powers to the state not seen in any democratic country anywhere in the world. We’ve seen unlawful imprisonment legislation given in the form of the Anti-Terrorism and Security Act, citizens being hunted down for dog fouling, underage sun bed use, not paying a BBC licence fee and even feeding pigeons though an Act designed to catch terrorists and enemies of the state. We now have Public Space Protection Orders – a geographically defined version of ASBOS that could severely restrict people’s freedoms in urban spaces. Here, sleeping rough or feeding the homeless can be a criminal offence and at the will of local authorities can also prohibit “under 16 year olds gathering in groups of three or more.”

We now have POPs or Privately Owned Public Space orders. This is where the privatisation of our cities’ public spaces is escalating. For instance in London’s ‘square mile’ there is not a single square foot of space designated as publicly accessible, mainly to stop protests against the banking behemoths and their egregious acts of criminality.

Today, we now have ‘Closed Material Proceedings’ or secret courts. So-called closed material procedure cases were extended to the civil courts under the Justice and Security Act 2013 and in the space of just two years, secret court cases doubled. This is where the judge sees evidence provided by the state but no-one else does, not even the accused. The Guardian reported that

“Under the law and practice as it stands, there will be a body of case law that touches on matters of great public interest, but for which there are no processes in place to ensure it will ever see the light of day” – these courts are truly dystopian in character.

The Trade Union Bill and the Organised Crime and Police Act aim to stop public protest and is essentially an attack on civil liberties which are respected in any free, democratic society. Minsters, hell bent on making huge cuts to public services and privatising everything in a neoliberal fire-sale of state assets built up over generations have been firing hundreds of thousands in the name of ‘efficiency.’ They, and the corporations that benefit wanted to ensure that strike action and protests were stopped so MP’s legislated against citizens valid concerns and subsequent public protest.

The proposed Espionage Act looks to ban reporting of future big data leaks. Leakers, whistleblowers and journalists are the main target. The UK parliamentary expenses scandal was a major political scandal that emerged in 2009 and aroused widespread anger among the UK public and resulted in a large number of resignations, sackings, de-selections and retirement announcements of politicians. A leak to the Daily Telegraph of the same type today would result in prison sentences of whistleblowers, journalists and editors who would, under these new laws, be treated as foreign spies passing sensitive information to an enemy of the state, that attracts a 14 year prison sentence for the public service it delivered. It won’t be long before anyone reporting new Snowden revelations or Wikileaks files will be treated the same.

In this photo dated Saturday, Jan. 14, 2017, journalist Julia Breen works on a story in the newsroom of The Northern Echo newspaper in Darlington, England. The newspaper’s journalists are among scores of reporters who have been spied on by British police over the past 5 years, according to court documents, although Cleveland Police issued a statement to deny allegations. (AP Photo/Raphael Satter)

The Digital Economy Bill is another attack on the civil liberties and freedoms of the nation. TalkTalk’s director of regulation, Andrew Heaney, said the way in which the Bill had passed through the House of Commons had been “undemocratic”.

“It’s a bad day for democracy, bordering on disgraceful, when such a complicated bill, which could negatively affect so many people, gets shoved through the Commons so quickly. It’s an appalling indictment of our democracy that this can happen with a bill which requires a great deal of understanding. Surely our MPs need to scrutinise the Bill for a longer period than two days.” This Bill has since been extended as they all seem to do nowadays to further curtail our rights as citizens in a salami-slice motion of mission creep.

Nat le Roux, who co-founded The UK Constitution Society more recently, wrote an article for the London School of Economics and Democratic Audit entitled “Drifting Towards Instability” – here he wrote the passage:

“A pessimist could easily believe that we are drifting towards institutional instability. Governments have become increasingly willing to alter very long-standing constitutional settlements for reasons which often appear short-term and politically self- interested. A serious clash between government and the senior judges over the extent of the courts’ powers of judicial review seems increasingly likely. The constitutional position of the civil service is being challenged by the current government in a way which would have been unthinkable a generation ago. Government ministers are increasingly bold in asserting their democratic mandate – or rather an over-representation of it – to trump all opposition. All of this is taking place against a background of the general breakdown of public confidence in the political elite. Not so long ago, Britain was widely admired across much of the world as a model of strong constitutional democracy. It is hard to believe that is the case today.”

Even though the government were eventually forced to admit their illegal actions of intercepting legally privileged conversations with lawyers, journalists and activists – this has been no barrier for future spying operations on law-abiding citizens.

For instance, British journalist Julia Breen’s scoop about racism at her local police force didn’t just get her on the front page, it got her put under full state surveillance.

In the months that followed Breen’s exclusive, her calls were logged, those of her colleague Graeme Hetherington and even their modest-sized newspaper’s little switchboard was fully surveilled in an effort to unmask their sources. The two were stunned when they eventually discovered the scale of the spying.

“It just never even crossed our minds,” Breen said in a recent interview; “I don’t know if I was quite naive, but on a regional newspaper you don’t expect your local police force to do this.”

This scale of state surveillance at the local level on journalists in the Northern Echo in the English market town of Darlington (population 106,000) should give us stark warning that the paranoid state and its agencies are now completely out of control and we have much to worry about as it marches onwards denying citizens their basic rights and freedoms and defying the laws of the land.

As Dominic Raab writes in his first-rate book ‘The Assault on Liberty’, government “has hyperactively produced more Home Office legislation than all the other governments in our history combined, accumulating a vast arsenal of new legal powers and creating more than three thousand additional criminal offences”.

Whilst Britain is obviously a way off having something like the East German Stasi, who were described as one of the most effective and repressive intelligence and secret police agencies to have ever existed, it should not be forgotten that Britain today has considerably more effective surveillance powers that East Germany ever did. It should also not be forgotten that that part of the world now has laws to protect their citizens from those imposed by the British government over its own citizens. In the space of just 30 years, East Germany has become a modern democracy whilst Britain heads off in the opposite direction.

Edward Snowden has described Britain’s strengthening of its state surveillance laws as part of an “authoritarian trend” and likens the government in that respect as bad as Russia or China. The reason he says this is because he knows that if he or Wikileaks releases more revelations, soon, in Britain, it will be illegal to report it.

ER recommends other articles by Global Research, and True Publica where this article originally appeared

Graham Vanbergen is the contributing editor of TruePublica.org.uk. He is also a featured permanent columnist for The European Financial Review and more recently The World Financial Review and regularly contributes to internationally recognised organisations such as; Global Research, Centre for Research on Globalization in Canada, Dissident Voice in the USA and expat driven Russia Insider, to name a few.

Former British Supreme Court Justice: “This Is What A Police-State Is Like” 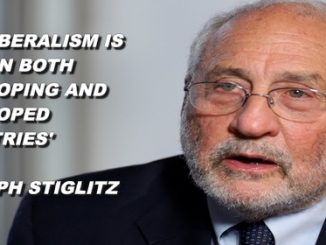