It’s official. Nobody on Earth knows what to believe anymore. At the United Nations (UN) experts say we’re on a collision course with climate disaster. In Washington D.C. the news is just Looney Tunes. In Britain, experts ramp up their claims that Vladimir Putin’s popularity is failing – again. But the most ridiculous report I’ve read in the last two years comes from the World Economic Forum (WEF). Read on and be amazed. The same people who have spent the last few decades stealing the legacy of humanity have cooked up a new fairy tale with “everyman” as the hero. A few days ago the Swiss NGO proclaimed that “Half the World is Now Middle Class or Wealthier.” While this sinks into your psyche, let me cite the lead of their report:

“Something of enormous global significance is happening almost without notice. For the first time since agriculture-based civilization began 10,000 years ago, the majority of humankind is no longer poor or vulnerable to falling into poverty.”

That’s right, according to the 1% business, banking, and political leaders that run the WEF there are currently 3.85 billion burbs driving around to the mall in Chevrolets, in case you haven’t noticed. Now let me help you understand the kind of lunatics we are dealing with way up yonder in Switzerland.

This new claim by the rocket scientist economists at WEF is based on some really stupid math. For instance, according to these elitist nincompoops, middle-class people spend between $11 and $110 dollars per day on essentials. So, a family with something around $330 dollars a month to buy food, etc. is able to “weather economic shocks,” take vacations and buy refrigerators. The fact these goofuses lumped the destitute of most developed countries in with people eating filet mignon for breakfast ($110 a day is ten times $11?) is a form of economics retardation for me. It’s like everybody who ever went to Davos has a reality disability.

Forgive me here, but I find it fascinating that the Swiss yodelers of world sustainability and economic health are citing the same Bill & Melinda Gates report I bashed in an earlier article. Let me quote the WEF story again:

“A lot has been written about the world’s progress in reducing the number of people living in extreme poverty, as highlighted in the recent Goalkeepers report put out by the Bill and Melinda Gates Foundation.”

What a load of malarkey. U.S. President Donald Trump stands up in front of the world and denies a UN report that there are millions of destitute Americans. He goes on to say our country only has 250,000 people suffering “real” poverty, and that the UN should be ashamed of itself. Meanwhile, he and his elite brethren wreck American environmental protections and line their own pockets as usual.

The world is almost out of the economic woods. Shangri La is right around the corner now, they assure us. Meanwhile, our sons and daughters work for wages that will deliver them subsistence and a movie once a month. But across most of Europe, Asia and Latin America, the “middle class” cannot even afford to pay attention. Here in Greece, the work week is 70+ hours, or you don’t eat. In Ukraine or Romania “middle class” means struggling to pay the electric bill. I won’t address these psychopaths’ ideas on financial Nirvana in Equator or Peru. All I can say is they had better pray to God the World Economic Forum does not move to Managua, Nicaragua, the poorest country in Latin America. We’d never have to worry about Bill Gates or the rest of the “global shapers” ever again. Hey, this gives me a brilliant idea. If we move them all to the worst place on Earth to let them lie their pants off, our economic crises will probably come to an abrupt end. Look at the “genius” Bill Gates woos the WEF with. The guy sounds like the dumbest flimflam man ever. When the WEF minions asked Gates what he knows this year that he didn’t last year, here’s how the zillionaire responded:

“The understanding of how important nutrition is has been rising. But I’d say in the last year, the breadth of that recognition has gone up quite a bit, and that’s at several levels.”

This is the best the 1% has to offer. With billions of people in big trouble around the world, Bill Gates’ genius progress hinges on people understanding starvation is bad. It’s as if the man does not even take the time to “bless” us with a decent answer. Wow, are we in trouble.

Gates goes on to educate us about kids being the most vulnerable to death if they don’t get on the right “growth path.” The co-founder of the world’s biggest software company is churning databases to figure out good nutrition for kids is a good thing. Meanwhile, his colleagues in the Swiss Alps are using a bullhorn to tell us we are A-OK, and not to worry about a thing.

I will stop worrying when Gates and the rest are in prison or transported to another planet by Elon Musk’s SpaceX rocket. How about you? 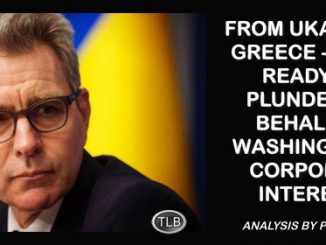 A Greek Recovery Cannot Come in This Climate of Chaos

The Coronavirus COVID-19 ‘Pandemic’? The Real Danger is “Agenda ID2020”