ER Editor: The tone of this article below is pretty indicative of how people feel toward the French government right now. People in all walks of life have been scrambling and ARE scrambling as we speak to deal with upcoming rules concerning vaccination-or-loss-of-job/money, etc. in September and October. Word has getting out for a while about how harmful vaccines are, so the conversation among dissidents has sidestepped that. People are worried for their livelihoods, and their kids, who are being threatened with vaccination. Liberty, justice, autonomy of the individual are the watchwords. Here we focus on doctors and other providers with private offices.

Here is a wide-angle perspective from a French doctor on Twitter about his own colleagues. The second comment is very instructive:

For 8 months, they’ve vaccinated whomever blindly without doing any kind of blood test beforehand! My friend, Professor Rampal is proposing anti-body doses, which should be done systematically so as to not vaccinate anybody undergoing an infection.

I’m absolutely shocked by the silence of the majority of my colleagues who, deep within their offices, are trembling and terrorized by the risk of losing their jobs if they criticize this shameful thing. Only a few dozen whistleblowers out of 300,000! 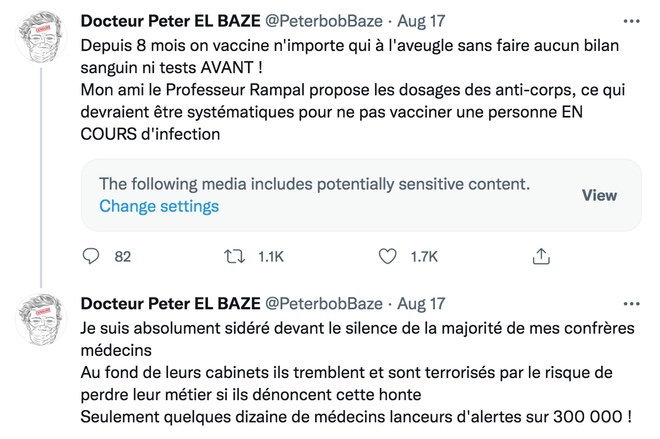 And it’s no wonder because, as we reported recently, French doctors’ certification is coming under threat if they don’t conform to some government-invented diktats. See Macron &Co. Quietly Create Certification Council to Control France’s Doctors.

There is an exquisite form of nastiness towards others that can be detected in French culture, especially from those in power against those way down the totem pole. This government policy (described below), devised against doctors, which is then passed onto patients, is a perfect example of that.

People now understand, as the writer indicates, that this has turned into a War on the People.

How far will violent harassment of healthcare professionals go?

Last night, we were stunned to learn that the violence of the harassment that our leaders are exercising on health professionals has been further accentuated, this time targeting the category of liberal professionals.

(ER: These are doctors, etc. who have their own stand-alone medical offices and aren’t employed by hospitals and medical centres, etc. on fixed salaries.)

We already know that from mid-September onwards, the income of non-vaccinated salaried health professionals will be suspended. This concerns doctors, dentists, nurses, nurses’ aides, physiotherapists, etc.

From mid-October, it is the turn of liberal health professionals (those who have a practice) to be the target of this nameless violence: their services will no longer be reimbursed by the SS (ER: social security)!!! A first in France !!!

Highly perverse and vicious manipulation: why punish the patients, who will no longer be reimbursed for the acts they have benefited from in their practice? And, the health professionals will find themselves … without income, if their patients flee their offices, knowing that their compulsory contributions CPAM, URSSAF, CARMF (pension fund), and their fixed charges (office rent, etc.) will continue to run… Which means: bankruptcy, cessation of activity… So, patients and health professionals are caught in a vice by the leaders… The art of dividing again and again !!!!

Forgive this freedom of language, but this is a truly DISGUSTING strategy!!! As much as it is an incitement to rant!!! It stinks!!!

It is therefore the announced death of liberal health professionals, after that of salaried professionals, and that of an entire health care system, knowing in passing that patients are however supposed to have “the free choice of their caregivers” and that they are already turned away from hospitals “because they clutter up consultations and emergencies”, for lack of possible care in the private sector. How long does it take to get an appointment with a pneumologist, a gynecologist, etc.? Months !!!!…. (ER: Even though France doesn’t have a stifling, government-imposed system like Britain’s NHS, it’s been known for a long time that successive neoliberal governments of France – irrespective of their cultural Marxist, ‘caring’ rhetoric – have been running the healthcare system into the ground.)

Decidedly, we don’t care about anyone, health professionals, patients, professionals of the show business, tourism and catering, the police, the gendarmerie, the army, that is to say ALL of US, we are the target of this coercive and terribly perverse violence; we no longer have our place in this country!!!

SHAME BE ON THESE LEADERS WHO HAVE REACHED DESTRUCTIVE MADNESS!!! 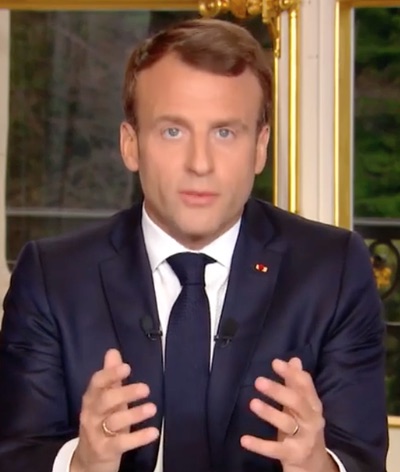 As one of these poor, crummy leaders said early last year, “we are at war!” (ER: This was Macron on TV.) Yes, they have gone to war… against their own people !!!! This is mind-blowing!!!

THE END, FINALIZED (because it started a long time ago…) OF THE HEALTH SYSTEM AS A WHOLE!!!… But the social contributions will not decrease for all that… and they will go into whose pockets???

And the extremely violent and devastating harassment assailed by our leaders on our people will be punished when?

THE DROP OF WATER THAT MAKES THE VASE OVERFLOW!!!

And this enterprise of large-scale destruction is only in its infancy: first, abolition of the leisure industry after it has been damaged (cafes, bars, restaurants, cinemas, theaters, tourism industry, etc.), then, suppression of the incomes of health professionals and thus of these professionals, then comes the same measure for education. Whose turn is it next? And our children??? (ER: We feel this broadscale concern for society is eminently justified given everything that is happening.)

Who will be caught up in this devastating cyclone? Answer: all sectors of society, all except our leaders and their media vassals, and the big lobbies (who, by the way, pay almost no taxes despite their immense fortunes, unlike the poorest who, proportionally, pay a fortune! Provided that our leaders are not deprived of their restaurants, their pleasure trips, their care, etc., and that they have everything they want!

Finally, we have a system: leaders with the media and the big lobbies, and with the police + the gendarmerie and the army on one side, and, on the other, the ENEMY TO BE FOUGHT AND BEATEN: THE PEOPLE… We have the wrong target !!!!  (ER: The police, gendarmerie and military may NOT actually be on the government’s side … lots of clues have been given about this. They will also be in the crosshairs of the government’s vaccination policy.)

Reminder: the mechanism of destructive manipulation is – under the cover of a beautiful principle, seemingly indisputable, and widely put forward to better numb distrust – to then make its victim feel guilty again and again to better paralyze him, and finally, to satisfy a powerful financial thirst at the expense of this victim.

Does this remind you of anything?

But HELL, CITIZENS (French and worldwide) WAKE UP, VACCINES OR NOT !!! You are 7 billion against a handful of leaders !!! Policemen, gendarmes, military – come back to the fundamental values which were to… protect the people, not to be enslaved and instrumentalized by these vile leaders  who are completely demented!!! WHAT WILL THEY BE ABLE TO DO WHEN THEY FIND THEMSELVES ALONE AGAINST ALL??? ….. N O T H I N G …….!!!

Official Data Show It’s Impossible to Have 30,800 More Deaths in France Because of COVID

2 Comments on How Far Will Violent Harassment of French Healthcare Professionals Go?