Germany’s right-wing Alternative for Germany (AfD) party has surged in popularity to become the country’s second most popular party behind Merkel’s Bloc. 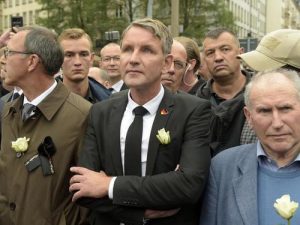 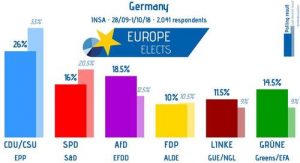 Coming in third is the Social Democratic Party of Germany (SPD) at 16% popularity.

AfD’s popularity is the latest sign that the populist wave sweeping Europe continues to pick up steam, as Europeans steadily reject open-border globalism and other progressive policies. Critics on the left suggest that the party is simply catering to public fears and frustrations over migrants.

AfD politicians are regularly accused of extremism and don’t shy from the type of nationalist rhetoric that mainstream German politicians largely have shunned since World War II. After launching in 2013, Alternative for Germany has grown powerful by focusing especially on the public’s fears and frustrations over the country taking in record numbers of migrants and refugees in recent years. –NPR

AfD’s supporters disagree – while the party believes it is in touch with German society. “On the crucial issues of our time, the views of the majority of the population coincide with ours. That drives these people to us,” AfD spokesman Jörg Meuthen told NPR, adding that accusations that the party’s members are dangerous right-wing radicals are “an expression of political helplessness.”

Meuthen – a German member of European Parliament and an economist, says that the party’s leaders “completely reject any form of right-wing radicalism.”

That said, members of AfD were seen marching in solidarity with anti-migrant group PEGIDA as well as neo-Nazi activists who were seen performing Nazi salutes – which are illegal in Germany, while shouting “foreigners out!”

Liberals are scratching their heads over the rise of AfD – suggesting that it’s a product of insecurity.

So, how has the AfD managed to garner so much support for its “alternative” for the country?

According to Werner Weidenfeld, a political scientist at the University of Munich, the party appeals to a variety of sectors. “The AfD supporters are not all right-wing radicals,” he says. There is a range of backers, including “disappointed middle-class” citizens and “some right-wing extremists.”

He thinks the AfD’s success reflects people’s longing for simple solutions to complex issues, like security and artificial intelligence. “We live in an age of complexity,” he says, “while at the same time nobody explains the complex connections. So there is confusion, and people become incredibly insecure. They are frustrated, afraid and want a simple answer.” –NPR

Over 1 million asylum-seekers came to Europe beginning in 2015, mostly from Syria, Afghanistan and Iraq, after Angela Merkel opened the country’s borders. German conservatives have have levied heavy criticism over the policy, and locals have grown frustrated at spiking crime rates blamed on migrants.

“So there is a valve for the frustration and anger over the prevailing political style,” says media scientist Jo Grobel, adding that as long as the party continues to focus on migration, it can harness Germans’ “shared anger.”

And while Europe’s establishment parties are still in control, winning elections – they have given up a lot of ground as populist parties make considerable gains.

“There is no singular explanation for the strengthening of the extreme right — it is a worldwide phenomenon,” says German parliamentarian Konstantin von Notz from the liberal Green Party. “The far right and autocrats have an international network and see themselves as a movement. This threatens the Western-type democracies massively, whose freedoms we have taken for granted for decades.”

ER Editor: Certainly the Left has had an international network for over 100 years. See Ioan Ratiu’s excellent book, The Milner Fabian Conspiracy.

“It consequently built its party structures along the network and uses it better than any other party,” says Political consultant Martin Fuchs. “both in terms of connecting [supporters] to the party, as well as the implementation [of its political agenda] with emotional content, escalating scandals, focusing on one topic and managing its community.”

The government is aware it needs to improve its appeal to citizens. “The public perception of the government needs a lot of improvement,” says Johannes Kahrs, a member of parliament for the Social Democrats, a partner in the ruling coalition. “Trust calms, a lack of trust gives a boost to the extremists.”

He says to combat the appeal of the AfD, traditional parties “need [to offer] guidance and we need to solve problems.” But he insists politicians should not adopt far-right positions: “There should be no attempt to overtake the far right on the right.” There has to be a clear limit to what is acceptable in German politics and society, Kahrs says. –NPR

In other words, the left can’t meme.

German Politician: “Ami Go Home!” – The US is waging bloody economic wars against the entire world 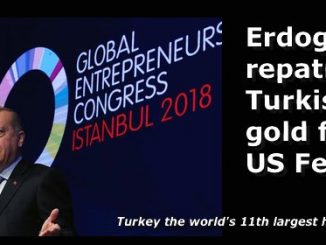