Mourtala Madou, a 33-year-old illegal immigrant from Niger, has been sentenced to life in prison for stabbing to death his 34-year-old German ex-girlfriend and decapitating their 21-month-old daughter at a subway station in Hamburg.

The grisly crime has drawn renewed attention to Germany’s spiraling epidemic of stabbings and knife violence, which has raged since Chancellor Angela Merkel allowed into the country more than a million mostly male migrants from Africa, Asia and the Middle East.

The double murder in Hamburg occurred the morning of April 12, 2018, one day after a family judge denied Madou (also known as Mado Bido M. or Mourtala M.) joint custody of his daughter. Madou followed the mother, Sandra P., and their toddler, Mariam, into the Jungfernstieg station in downtown Hamburg. In front of many passers-by, he opened his backpack, pulled out a knife and stabbed his stroller-bound daughter in the abdomen. He then slashed her neck and severed her head. Madou subsequently plunged the knife into Sandra P.’s back and cut through her vital organs. She died less than an hour later at a nearby hospital.

During interrogation by police, Madou explained: “This is my child. This is my blood. The mother separates me from the child. Then I separate the child from her.”

On February 15, 2019, the Hamburg District Court (Landgericht Hamburg) sentenced Madou to life in prison for two counts of murder. In addition, the court established a “particular severity of guilt” (besondere Schwere der Schuld), a legal mechanism applied to sentences for especially brutal crimes. That verdict disqualifies Madou from automatically being eligible for parole after serving 15 years, as otherwise is the normal practice in Germany. A lawyer representing Sandra P.’s sister said that the sentence handed to Madou was “the maximum we could legally achieve.”

Police and prosecutors had initially tried to conceal from the public that Madou had decapitated the baby, but a commuter — Ghanaian citizen Daniel J., a gospel singer at an evangelical church in Hamburg — who happened to arrive at the subway station moments after the attack filmed the scene on his phone. “Oh my God,” Daniel J. can be heard saying in English. “It’s unbelievable. Oh Jesus, oh Jesus, oh Jesus. They cut off the head of the baby. Oh my God. Oh Jesus.”

Heinrich Kordewiner, a blogger from Hamburg who discovered the video on Daniel J.’s Facebook page, uploaded it to YouTube. Hamburg police subsequently arrived at Kordewiner’s apartment with a search warrant, and confiscated his computer, mobile phone and other electronics, allegedly to find “evidence” of the “crime” of uploading the video.

German prosecutors also pursued Gatestone author Stefan Frank for quoting verbatim from the search warrant, which included details of the murder, including that the child was beheaded. The fact of the decapitation was not only omitted from public reports, but also denied. District Attorney Lars Mahnke claimed that “speculation” about the beheading was false. Frank, however, knew about the beheading because it was mentioned in the search warrant. His “crime” was informing the public. The case against Frank was dropped in January 2019 after he agreed to pay a fine of 300 euros ($340).

Police and prosecutors have insisted that their silence about the child’s decapitation has been out of respect for the dignity of the dead. Others, however, have accused German authorities of censoring information about growing lawlessness — including spiraling knife violence — to “preserve civil peace.”

Official statistics on knife violence in Germany do not exist. The Conference of Interior Ministers (Innenministerkonferenz, IMK), in an ongoing exchange of views about law enforcement issues between the interior ministers of Germany’s 16 federal states, recently decided that federal crime statistics should include data about knife violence. Before that can happen, however, German authorities must first “develop guidelines” for statistics on knife crimes, and also “convert technical registration systems in the federal states.”

In February 2019, Oliver Malchow, chairman of the German Police Union (Gewerkschaft der Polizei, GdP), called on the government to speed-up the collection of data on knife crimes. “We have heard it will not take place until 2022,” he said, “but we think that is too late.”

The Federal Criminal Police Office (Bundeskriminalamt, BKA) said that “as soon as uniform reporting is ensured, the corresponding data can be incorporated into the nationwide statistics.” At present, however, “the BKA can make no statements as to whether attacks with knives in Germany are increasing.”

A review by Gatestone Institute of German police blotters found that 2018 was a record year for stabbings and knife crimes in Germany: Police reported more than 4,100 knife-related crimes in 2018, compared to around 3,800 reported during 2017 — and only 400 in 2008. Overall, during the past ten years, knife-related crimes in Germany have increased by more than 900% — from one a day to more than ten a day. The data shows a notable increase in knife crimes since 2015, when Chancellor Angela Merkel opened German borders to hundreds of thousands of migrants.

German media do not report most knife-related violence. Crimes that are reported are often dismissed as “isolated incidents” that are unrelated to mass immigration. Moreover, many crime reports, including those in police blotters, omit references to the nationalities of the perpetrators and victims — apparently to avoid inflaming anti-immigration sentiments.

Knives, axes and machetes have become weapons of choice for criminals in Germany, which has some of the strictest gun laws in Europe. People armed with knives, axes and machetes have brought devastation to all of Germany’s 16 federal states. Knives have been used not only not only to carry out jihadist attacks, but also to commit homicides, robberies, home invasions, sexual assaults, honor killings and many other types of violent crime.

Police reports show that both migrants and non-migrants are responsible for the increase in knife crimes in Germany. Merkel’s open-door migration policies appear to have set in motion a self-reinforcing cycle of violence in which more and more people are carrying knives in public — including for self-defense. Her policies appear to be leading to more and more stabbings, especially when alcohol is involved.

“The reasons for carrying a knife are mainly due to the fear of becoming a victim of a crime, and also the orientation towards masculinity norms,” according to the BKA, which added that young people who carry knives are twice as likely to commit acts of violence as young people who do not carry a knife.

Some of the recent stabbings appear to have had religious or political motives, sometimes both:

Many knife attacks appear to be random, indiscriminate assaults on innocent bystanders and passersby:

Knives appear to be the weapon of choice in so-called honor killings and domestic disputes:

Soeren Kern is a Senior Fellow at the New York-based Gatestone Institute. 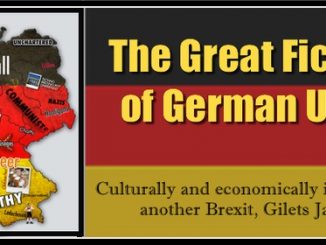 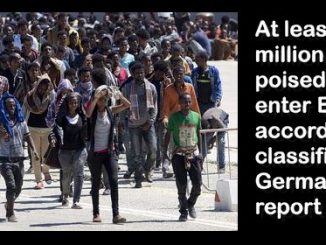 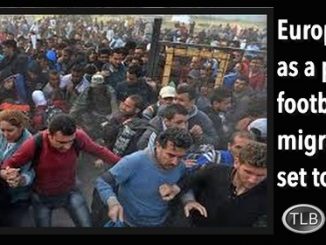 1 Comment on Germany: Stabbings and Knife Crimes are at Record High