An angry Berlin has responded with a staunch defense of its policies after President-elect Donald Trump criticized German Chancellor Angela Merkel in two separate Sunday interviews, one with Germany’s Bild and one with the Sunday Times, for her stance during the refugee crisis while threatening a 35% tariff on BMW cars imported into the US.

Germany’s deputy chancellor and minister for the economy, Sigmar Gabriel (pictured), said on Monday morning that a tax on German imports would lead to a “bad awakening” among US carmakers since they were reliant on transatlantic supply chains. “I believe BMW’s biggest factory is already in the US, in Spartanburg [South Carolina],” Gabriel, leader of the centre-left Social Democratic party, told the Bild newspaper in a video interview. 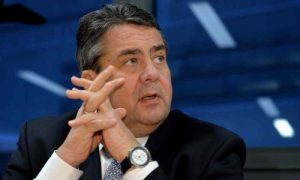 “The US car industry would have a bad awakening if all the supply parts that aren’t being built in the US were to suddenly come with a 35% tariff. I believe it would make the US car industry weaker, worse and above all more expensive.” Playing Trump’s threat off Congress, Gabriel added that he “would wait and see what the Congress has to say about that, which is mostly full of people who want the opposite of Trump” as quoted by The Guardian.

In his interviews with Bild and the Times, the US president-elect had indicated that he would aim to realign the “out of balance” car trade between Germany and the US. “If you go down Fifth Avenue everyone has a Mercedes Benz in front of his house, isn’t that the case?” he said. “How many Chevrolets do you see in Germany? Not very many, maybe none at all … it’s a one-way street.”

So, when asked what Trump could do to make sure German customers bought more American cars, Gabriel had a simple suggestion: “Build better cars.”

Trump’s interview had an adverse impact shares in carmakers BMW, Daimler and Volkswagen, which fell on Monday morning following the President-elect’s comments. BMW shares were down 0.85%, shares in Daimler were 1.54% lower and Volkswagen shares were trading 1.07% down in early trading in Frankfurt. The reason for Trump’s latest outburst at Germany’s car giants is that all three carmakers have invested heavily in factories in Mexico, where production costs are lower than the US, with an eye to exporting smaller vehicles to the American market, a move which Trump vocally disapproves.

Meanwhile, a BMW spokeswoman said a BMW Group plant in the central Mexican city of San Luis Potosi would build the BMW 3 Series starting from 2019, with the output intended for the world market. The plant in Mexico would be an addition to existing 3 Series production facilities in Germany and China.

Responding to Trump’s comments that Merkel had made an “utterly catastrophic mistake by letting all these illegals into the country”, Gabriel said the increase in the number of people fleeing the Middle East to seek asylum in Europe had partially been a result of US-led wars destabilising the region.

Slamming US foreign policy – and thus the Obama regime, not to mention Angela Merkel’s close friend Hillary Clinton – as a culprit for the European refugee crisis, Gabriel said that “there is a link between America’s flawed interventionist policy, especially the Iraq war, and the refugee crisis, that’s why my advice would be that we shouldn’t tell each other what we have done right or wrong, but that we look into establishing peace in that region and do everything to make sure people can find a home there again,” Gabriel said.

“In that area Germany and Europe are already making enormous achievements – and that’s why I also thought it wasn’t right to talk about defence spending, where Mr Trump says we are spending too little to finance Nato. We are making gigantic financial contributions to refugee shelters in the region, and these are also the results of US interventionist policy.”

Gabriel, who will likely run as the centre-left candidate against Merkel in Germany’s federal elections in September, said Trump’s election should encourage Europeans to stand up for themselves.

“On the one hand, Trump is an elected president. When he is in office, we will have to work with him and his government – respect for a democratic election alone demands that,” Gabriel said. “On the other hand, you need to have enough self-confidence. This isn’t about making ourselves submissive. What he says about trade issues, how he might treat German carmakers, the question about Nato, his view on the European Union – all these require a self-confident position, not just on behalf of us Germans but all Europeans. We are not inferior to him, we have something to bring to the table too.

“Especially in this phase in which Europe is rather weak, we will have to pull ourselves together and act with self-confidence and stand up for our own interests.”

While Merkel has yet to provide a direct response to Trump’s statements and refused to comment on the interview during a news conference with New Zealand Prime Minister Bill English, saying she would wait until after Trump’s inauguration and then planned to work with him at all levels of government, her spokesman, Steffen Seibert, said the chancellor had read the Trump interview “with interest”, but declined to comment in more detail until the president-elect had been sworn in.

“We are now waiting for President Trump to start his term and will then work closely with the new government,” he said, adding that “It’s a clear statement of the positions of the new American president, but the positions of the chancellor on many of these issues are equally clear.”

Martin Schäfer, a spokesman for the German foreign ministry, rejected Trump’s labelling of the EU as a “vehicle for Germany”. He said: “For the German government, Europe has never been a means to an end, but a community of fate which, in times of collapsing old orders, is more important than ever.”

The foreign ministry also rejected Trump’s criticism that creating “security zones” in Syria would have been considerably cheaper than accepting refugees fleeing the war-torn country. “What exactly such a security zone is meant to be is beyond my comprehension and would have to be explained,” said Schäfer, adding that there had not been enough willingness among the international community to lend military support to create a no-fly zone in Syria. 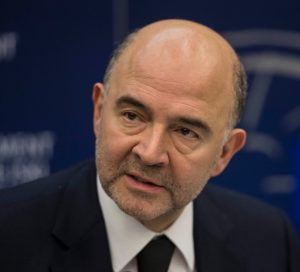 Germany was not the only nation unhappy with Trump’s statement: Pierre Moscovici (pictured), European economic affairs commissioner, also found fault with Trump’s assertion that other European countries would follow in Britain’s footsteps and leave the EU.

“I’m not worried, I think this idea that Brexit is going to be contagious is a fantasy, a bad fantasy,” Moscovici told reporters in Paris. “Brexit is not a great thing,” he said, warning Trump that comments advocating a break-up of the EU would not get the trans-Atlantic relationship off to the best start.

Yet while Germany and Brussels were unhappy with Trump’s criticism, Moscow was delighted, and sure enough Trump’s remarks on Nato were met more favourably in Moscow, where Dmitry Peskov, spokesman for the Russian president, Vladimir Putin, agreed with the US president-elect that the alliance was “obsolete”.

“Since Nato is tailored toward confrontation, all its structures are dedicated to the ideals of confrontation, you can’t really call it a modern organisation meeting the ideas of stability, steady growth and security,” he said.

But Trump’s suggestion that the US could lift its sanctions on Russia in exchange for an agreement to reduce the countries’ nuclear arsenals elicited a cooler response. Peskov said Russia had not been conducting talks with the US about nuclear arsenal reduction and said cancelling sanctions was not a political goal in Russia. “Russia wasn’t the initiator in introducing these restrictions, and Russia, as the president of Russia has underlined, doesn’t intend to raise the issue of these sanctions in its foreign contacts,” he said.

Last month, echoing similar comments by Trump, Putin said Russia needed to strengthen its strategic nuclear forces. Leonid Slutsky, a Russian MP, said he “wouldn’t connect these two issues and make the cancellation of sanctions a negotiating point in such a delicate area as nuclear security”. Konstantin Kosachyov, head of the foreign affairs committee in the Russian senate, said the cancellation of sanctions was “definitely not an end in and of itself for Russia”.

“It’s not even a strategic goal for which something needs to be sacrificed, especially in the security sphere,” he told state news agency RIA Novosti. “We think [sanctions] are a bad legacy of the departing White House team that need to be sent after it into history.”

And yet, perhaps Trump’s bluster was merely the latest ruse to get everyone on the negotiating table. It may be working already: as Reuters reports, Chancellor Merkel is working to set a date this spring for a meeting with Donald Trump, who will be sworn in as U.S. president on Friday, German government sources said on Monday. Merkel had offered to meet Trump in the United States in her capacity as chairman of the Group of 20 leading economies, the sources said.

The chancellor has spoken with Trump only once, shortly after his election to succeed U.S. President Barack Obama. Following Trump’s latest “stunning” public statements, she now appears to be in a hurry to not only speak with him again, but also meet face to face. 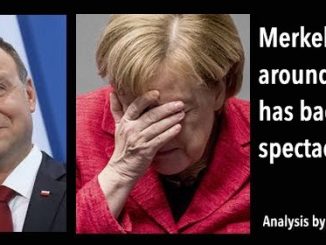