Despite Britain’s move to block an EU army, a growing number of experts believe a recent German defense paper shows Berlin has ambitions to run an EU army, and has a plan to cut through Brussels red tape and create one by itself. But at what cost to NATO?

While EU defense ministers openly discuss with NATO chiefs how to create an EU army, many might think the haste for the EU to go ahead with such a grandiose plan stems from its own credibility being at an all-time low in the wake of Brexit. 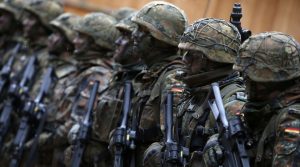 For EU federalists in Brussels, there is indeed some truth in this. But Brussels is also worried about being left behind or dwarfed by Germany’s own plans which would leave the EU in a weak position to negotiate who gets to call the shots in an official EU army, when it is finally created.

And the EU has good reason to worry. Germany is impatient and is looking to position itself as the military leader of a coalition of EU countries which would no longer take orders from NATO, but also would not necessarily even be part of an official EU army. 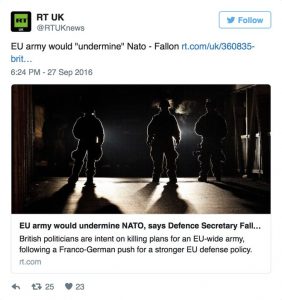 Few journalists want to report in Brussels that there is a race between the EU getting a formal army together and Germany getting its own renegade pan-European army, which could ultimately present itself to the European Commission as already up and running.

According to one respected military expert, Germany is positioning itself to be the country which would be the dominant force in a new EU army, regardless of its structure.

A German defense white paper recently released argues strongly for an EU army and was ordered by Angela Merkel to be kept under wraps until after the British referendum vote on June 23.

But now military experts are examining the detail of the ‘Weissbuch’ (‘white paper’).

It reveals a radical change in German plans to not only boost its present army’s mandate in troubled hotspots around the world, but also clearly states that it should be running any multinational military organizations, such as the proposed EU army.

“The 2016 [Defense White Paper] represents a paradigm shift in two important respects,” says John R. Deni, a research professor at the US Army War College’s Strategic Studies Institute. “What is perhaps most significant,” he warns, “is the declaration that Germany will be willing to not simply participate in but also to initiate such coalitions. This is a major departure from the past, in which Germany consistently sought to exercise hard power solely through established multilateral institutions.”

The initiative is a bombshell for the head of NATO Jens Stoltenberg who recently attended the EU meeting of Defense Ministers in Bratislava. NATO was hoping for an EU army to work under it. “Clearly a key point for us is to avoid duplication and make sure efforts are complimentary” a spokesman told me, while another NATO official told me that such a subject is not one that the organization wants its German generals commenting on.

Furthermore, according to the US professor, the paper reveals that Germany is ready to take charge of a formal EU army – run by Brussels – or an informal one run by Berlin. That could mean that if an EU army cannot be formed in time, Berlin might simply ask a number of EU countries who are keen to join its own army on international missions, to be part of its ‘coalition’ – thereby creating an informal model which would be later adopted by EU chiefs, who would have little choice than to support it.

But there are stronger arguments for Germany to take control of a formal EU army run by Brussels.

Although some might argue Germany would go ahead with military plans in a given war zone – and then invite others to join such a pact – practically, it is more likely that it would run the EU army as a deal with Brussels guaranteeing that EU countries would not break away from the regular EU army and join Germany on missions.

Brussels would certainly have to give in to German demands, in order to save face and keep its own “EU army.” 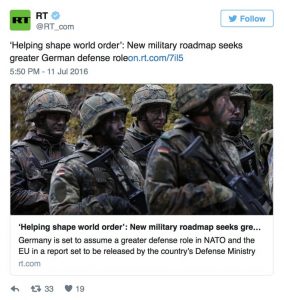 Yet even a formal EU army run by Germany or EU officials would still harm NATO, whose credibility took a knock recently when Turkey went rogue in Syria. Some military experts say the thinking is flawed and a German-led (non-EU) coalition, as an alternative, would even be welcomed.

“The biggest concern is that EU ambitions would lead to a split in NATO,” argues Geoffrey van Orden MEP, a retired Brigadier and respected military analyst. “EU defense policy is all about creating a federal Europe. It has little to do with providing more military capability.”

The British conservative MEP suggests the idea of an EU military arm strengthening NATO is folly: “There are huge flaws in this approach. For a start, the two largest military powers in Europe, the UK and Turkey, are both NATO members but they won’t be in the EU,” but goes on to hint that an autonomous German-led military organization wouldn’t be such a bad thing.

“I don’t worry about the Germans as such – in fact I’d welcome greater defense commitment from them – it’s the idea of EU military ambition, creating distraction and schism in NATO, that is the real concern,” he adds.

For British MEPs, anything which casts a shadow on NATO operations is a worry.

“NATO has served us well,” argues Mike Hookem MEP. “It is not perfect but it is a much safer option than the EU federalists and war mongers who wish to antagonize the Russian bear,” he warns.

The British UKIP MEP, who sits on the defense committee in the European parliament, adds it will be a sad day for Britain when Germany’s army takes control of an EU army. “There are still people who remember WWII and the atrocities carried out by the Nazis,” he told me. “Now, because of Merkel’s actions over the migrant crisis, the far right are on the rise in Germany which will not fill people with confidence that Germany may once again have control of such military might.”

Show me the money, Juncker

Yet despite Germany being the strongest EU member economically, how would a German government pay for such a hugely expensive venture, given that America’s invasion of Iraq cost taxpayers close to two trillion dollars?

According to the American academic Dr. John R. Denie, it wouldn’t need to. Denie claims Germany has further reason to take the leadership of an EU army, in that the country’s own resources do not correspond with Berlin’s military ambitions around the world, the American professor claims in a recent article for a US defense website.

Being the leading player in an EU army would be hugely beneficial to Germany’s plans to punch above its weight around the globe – and get others to pay for it. An army top heavy with German generals and packed with troops from other EU countries keen to be part of it would resolve Berlin’s present dilemma, according to the paper. Presently, Germany’s defense budget is only €35 billion compared to the UK’s which is over £35 billion.

The plan has also received a real push from Europe’s top diplomat, Federica Mogherini, who is reported to have told colleagues that an EU military scheme – billed by some countries as the foundation of a “European army” – represented a chance for the EU to relaunch itself after the “shocking” Brexit vote which has made the project shaky and led to some EU leaders even talking of a crisis.

“We have the political space today to do things that were not really doable in previous years,” Ms Mogherini told EU ambassadors, according to a report in the Daily Telegraph newspaper.

In fact, Mogherini’s vision, if studied closely corresponds with Germany leading a multinational coalition of European armies first. An EU army, she hopes, would evolve slowly from an initial plan where countries like France, Germany, Italy, Spain and Poland create permanent military structures to act on behalf of the EU and for the deployment of the EU’s battle groups and 18 national battalions.

In essence, it would act independently from NATO which has always taken the role of defending Europe with some even arguing that such a move might even threaten the organization, which also has its headquarters in Brussels. 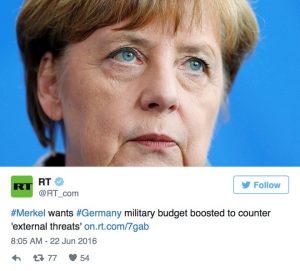 For skeptics of the broader plan, it’s a stark choice between a German chancellor running such an ambitious military operation or the rather ineffective EU diplomat Federica Mogherini, who has struggled to achieve even the most fledgling success since heading up the EU ‘foreign office’ which spends €600 million a year on diplomats and EU embassies around the world, but was not even invited to the Syrian peace talks recently.

“No one in the EU has a clue about defense or security – just look at their reaction to the Paris, Brussels and Nice attacks and their refusal to admit their policies have led to the Calais crisis,” says Hookem. “Even when they have small missions abroad in Africa they just end up wearing out the parade square. To hand over power to a woman with such an appalling track record is frightening,” he adds.

Martin Jay is a veteran foreign correspondent, based in Beirut, who works on a freelance basis for a number of respected British newspapers as well as Deutsche Welle TV. 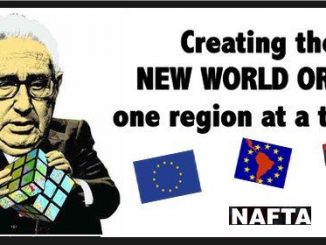 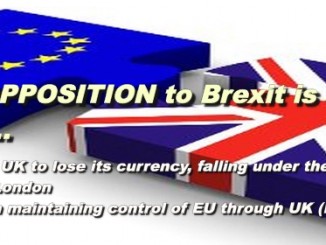 Brexit: What Is It About? — Paul Craig Roberts 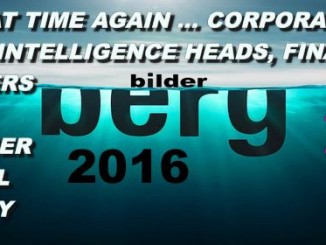 Bilderberg 2016 gets underway in Dresden