ER Editor: The German health minister does seem to warrant some sort of mental illness diagnosis based on his past actions. He is a very odd and troubled individual indeed. Why is he allowed to remain in his position?

So much is going on in and around Germany right now designed to create chaos, breakdown and distrust with its government that you have to wonder what’s really going on in the background. Think: disastrous energy policy while Nord Stream 2 has been ready to go online for months; corresponding economic breakdown in an otherwise economically flourishing nation; the date rape drug being found in female attendees’ drinks at an Olaf Scholz political get-together a while back. Now, more health policy nuttiness, Chinese-style, from a nutty man in a senior position of responsibility representing a G7 country. Who’s the puppet master here?

German Minister of Health Karl Lauterbach (SPD) was called “confused” by a tabloid while former domestic spy chief, Hans-Georg Maassen said he may be suffering from a “mental illness”.

BERLIN – Contrary to his various documented demands that those under the age of 70 should be vaccinated against Corona a fourth time, Lauterbach told the ZDF heute journal: “I never said that all younger people should now be vaccinated. That’s just wrong.” But not long ago, the SPD politician had explicitly told Der Spiegel, among other things, that he “recommended the vaccination to younger people”.

On Twitter, the Minister of Health also suddenly distanced himself from his previous recommendation that people be vaccinated every three months. But that is exactly what his “Corona protection concept” presented together with Justice Minister Marco Buschmann (FDP) stated in order to avoid restrictions on fundamental rights. Only those who were vaccinated less than three months ago would be recognized as “vaccinated” he had warned.

Bild newspaper underscored the inconsistencies by calling the minister “confused”. They headlined the report with “Confused Lauterbach tweets from Corona isolation”.

In an interview with the YouTube program Hello Opinion, the former spy chief went much further. Hans-Georg Maassen did not mince words:

“If you look at what Mr Lauterbach said – sometimes he is barely able to finish a sentence without making a mistake – you really have to ask yourself whether the man still has the necessary mental strength to carry out his duties as a minister or whether the Federal Chancellor should not have to have him examined by a public health officer.”

Maassen also referred to statements made by Lauterbach in 2020. At that time, Lauterbach had doubted the effect of mRNA vaccines. Maassen continued:

“If he were my employee, I would have the greatest doubts about his ability to work. Whether it is a mental illness or through substances that are administered, I cannot judge. But I think the man is no longer master of his senses.”

German Health Minister Karl Lauterbach has announced that the nation’s digital contact tracing and vaccine passport app, Corona-Warn-App (CWA), will start assigning different colors to citizens based on whether they received a COVID-19 vaccine within the last three months.

Other citizens, including those who received multiple vaccines but had their last vaccine more than three months ago, will have to show proof of recent recovery from COVID or a current negative test to get an exemption from this mask requirement.

Germany’s Berliner Zeitung noted that the color codes in the vaccine passport app would “give different rights in the future” and said the system would put citizens who are already quadruple vaccinated on the same legal footing as those who are unvaccinated.

Despite moving to this color code vaccine passport system, Lauterbach has admitted that the goalposts could shift at any time and that if too many freshly vaccinated people make use of the mask exception, Germany will change the rules and close the exception. (ER: Bizarre.)

Health agencies defended the rollout of vaccine passports and other COVID surveillance measures by claiming that they would prevent the spread of the coronavirus. However, in recent weeks, government health experts have admitted that COVID vaccines don’t prevent infection.

Despite this admission, Germany and other nations are continuing to push far-reaching, restrictive vaccine passport systems. Some countries are also combining vaccine passports with digital ID or rolling out more invasive COVID surveillance devices such as wristbands and ankle bracelets. 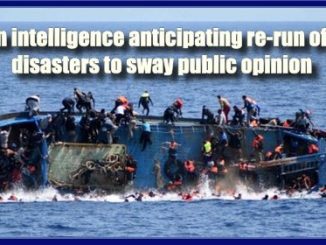 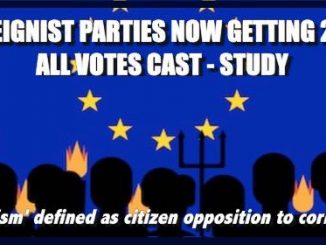 Support for EU sovereign parties has tripled in two decades