One of France’s leading conservative news magazines has highlighted the “denial, abandonment and powerlessness” of the French state faced with hordes of foreigners who do not fit in and do not want to become French.

The weekly discusses the “anthropology of day-to-day savagery” committed by black and Arab youths.

A video of a black youth holding a gun to a white teacher’s head (pictured) has provoked intense discussion about diversity, disorder, crime and violence, euphemistically called the “security situation” in the country. 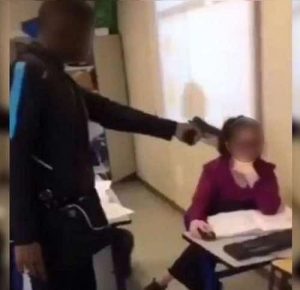 On 13 February this year, Valeurs Actuelles interviewed France’s Interior Minister, Gérard Collomb (see featured image). Collomb has recently resigned, but the magazine has nevertheless published the interview, no doubt because of the deteriorating security situation that the former minister had warned about before he left office.

When asked how he judged the security situation in France, Collomb said he found daily police reports “very worrying” since it conveyed a pessimism and deep divisions between ethnic communities.

“What I read every morning in notes from the police reflects a very pessimistic situation. The relations between people are very hard, people don’t want to live together…”

According to Collomb, immigration is “greatly responsible” for the current dire state of public life. “It’s for that reason that, with [French President] Emmanuel Macron, we wanted to change the law,” he said.

The law that Collomb together with Macron had proposed only focused on illegal immigration. Legal immigration actually allows more than 200,000 people into the country each year.

Collomb acknowledged that legal immigration also “remained a problem” and said that there was “absolutely” no need for more immigration to France.

“Communities in France are engaging in conflict with one another more and more, and it’s becoming very violent,” he explained.

“It’s difficult to estimate, but I would say that within five years the situation could become irreversible. Yes, we have five, six years to avoid the worst. Afterwards…” he shrugged, suggesting that it would soon be too late.

Gérard Collomb resigned on October 3, saying he wanted to run for mayor of Lyon in 2020, but most pundits already suspected that deeper differences with Macron over immigration and security matters forced him out.

On the day of his resignation Collomb remarked: “Today, we live side by side. I fear that tomorrow it will be face to face.”

Before the weekend there were calls by black and Arab youths on social media for a “purge” on the night of Halloween. 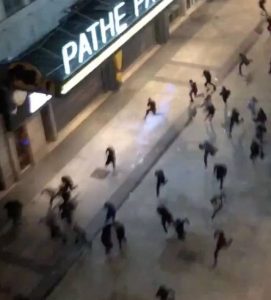 Faced with calls for violence against the police, the new Minister of the Interior Christophe Castaner had announced added police reinforcements, but despite that, on the evening of October 31, street furniture was vandalised and physical assaults occurred. Attacks on police by masked youths in Essonne and Lyon were registered.

A police source confirmed to AFP that police were deployed in greater numbers, but early in the evening of October 31, a journalist from the LyonMag news site was already reporting on a tense situation. 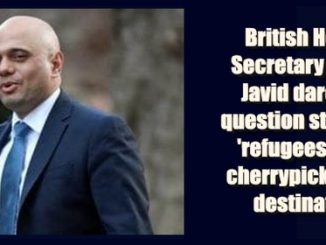 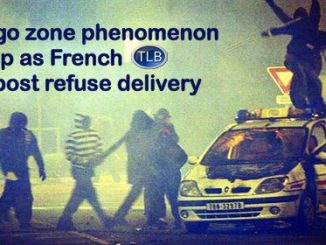 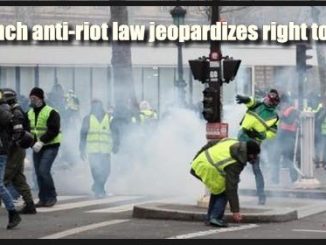