ER Editor: Our thanks to Dutch journalist Michel van der Kemp for bringing this story to our attention and for having done an excellent English translation of the oral Dutch video testimony below.

Kudos to one Mr. Koendrink, resident of Haaksbergen, which is far inland, adjacent to the German border.

This made it to Twitter, indicating why this story matters in the Netherlands:

Translation: Koenderink, as “speaker”, managed to make the #VaccinationDamage clear to the Haaksbergen City Council within 10 minutes with the #pfizerdocuments. Why can’t this be done in The Hague? Is that determined by #Pfizer? Where is @PieterOmtzigt?

Rob Welten, Mayor Haaksbergen: Then we will move on to agenda item 4, and that is the agenda item citizens’ right to speak. There Mr. Koenderink reported and would like to use his right to speak. I am about to give the floor, welcome Mr Koenderink, and he wants to speak on poverty and health. He knows that he will have a maximum of 5 minutes to speak, and if desired, council members can ask him clarifying questions in response to his input. For the sake of clarity, there will be no discussion. Mr Koenderink, I would like to give you the floor.

Mr. Koenderink: Thank you very much, good evening everyone. Today I want to talk about health and what everyone has experienced in recent years is that health is a bit lacking. Unfortunately. And I will be vulnerable here, and especially with regard to what is happening around us. People are collapsing, young people are collapsing. Young people are ending up in hospital. Pericarditis, myocarditis, and so on. How is that possible? That’s a question.

More cancer cases, more stillbirths, how is that possible? What is this about? Then you will say, that is something rural. No, it’s also a local thing. It is happening here, in Haaksbergen. And it’s bad enough, until the Pfizer report that wasn’t supposed to be released for 75 years, 75 years from now, has now been released for viewing. And then you’re scared. If you read through that Pfizer report, that in the first 45,000, the supposedly vaccinated people, 42,086 had side effects in the first three months. Do you know how many died in those first three months? 1,223, that’s 2.91% died directly from the vaccination, proven by Pfizer. The report is before you. And then we’re not scared? Then we don’t have to think: what’s going on here? Are we still supposedly getting vaccinated with this? Are we okay with all this happening?

You do it for someone else, it is said. You do it for your grandfather, you do it for your grandmother, you do it for your parents. And then you start thinking. And then a European parliamentarian (ER: Dutch MEP Rob Roos) comes along and asks Pfizer and Moderna: is this a remedy for transmission? And then it is simply said in the European Parliament: no, this remedy was never thought to fight against transmission. So it means I get vaccinated, but it doesn’t mean that I protect someone else because of it. That is not true. It is a lie what happened in the Netherlands. A pure lie. There is lying by the former Minister of Health, and lying by the current Minister of Health. And it’s a shame. And I don’t understand that we as Haaksbergen residents can still accept this. That we see around us that people are dying, perishing, multiple cancer cases. Everything is here in the report. The report is before you.

Then you go to page 7, and then you get a fright. Page 7: Fatal 1,223 people out of those 45,000, with 11,361 people not yet recovered within those three months. What does that mean? That was in the period from December 1, 2020 to February 28, 2021. Not recovered, the report was issued on April 30, 2021, not recovered when the report was made. And we accept that? That we’re still here with this syringe, which I can’t call a vaccine, because the Supreme Court in America ruled that it shouldn’t be called a vaccine. I call it a poison shot, and nothing more, and nothing else. More cancer cases, more than ever, 755% more stillbirths. Is that normal? Do we consider that normal? Let’s go to the next page, and then we’ll go a few pages more. Does it help against Covid? No. Of those 45,000 people who were double shot, 3,046 people still got Covid. Do you know how many died in those three months? Then just a few pages further, page 17. Fatal 4.34%, who still died of Covid, while they were vaccinated, in those three months. Double vaccination. Will we continue to facilitate this syringe in Haaksbergen? Think, look at this official report from Pfizer. Is this normal? I don’t think it’s normal anymore. The 5 minutes are up, I know…

Mr. Koenderink: And the only question is, what is our mayor’s core task?

Mayor: Thank you. (Applause from the room) You are a guest here at the city council in Haaksbergen, and that is also very much appreciated, but I would ask you to refrain from signals of approval or disapproval. That is not the intention in the council chamber. Thank you for your understanding. (Boo from one person). If you want us to take this up, I hope you can muster it. I’m going to the council, who wants to ask a question.

Bert Woortman: Thank you chairman. Thank you for your speech. Clear. The thought that occurred to me while you were busy, why don’t you bring this story to The Hague?

Mr Koendrink: Hi, I would like to, but you also know that you will not get a foothold in The Hague, whatever you do. If you want to bring it in or whatever, we’ve tried, it’s not to be talked about. One should not talk about excess mortality.

Wesley Uuldriks: Yes, thank you Mr Koenderink. I see this report, I haven’t had time to read it all the way through, but I’ll be sure to see what’s in it. I wondered where did the report come from. Because you give it to us as a print, is it publicly known on the Internet?

Mr. Koenderink: This report under Pfizer. Because they had to expose this, and actually not until 75 years from now, there’s been a lawsuit about them having to release this sooner. And that’s why we were shocked.

Mayor: Thank you. I’ll take a look around. Those were the questions. Well Mr Koenderink, it is not on the agenda, it is also not a subject that will be on the agenda for the coming month, so I will now also pass it along to the council, then it is up to council members or council faction to determine in what way this is being picked up. I assume that will also be announced further. I thank you for your input, and the others for the interest as well.

It was a remarkable start to the meeting of the city council of Haaksbergen on the last day of November. Mr. Koenderink had applied for the right to speak, who, in addition to a large number of ‘supporters’, also brought a report from Pfizer ( probably the largest pharmaceutical company in the world ) and left it on the tables of the members of the city council. His presentation related to this report, which he said should not be released for another 75 years.

What Mr. Koenderink said about the ‘conclusions’ from the report came down – roughly speaking – to large excess mortality, apparently more cancer cases, marked excess mortality in births, etc. In the world and in the Netherlands in general, but in Haaksbergen in particular.

Mr Koenderink indicated that he believed that the mayor should no longer facilitate vaccinations against the corona virus. The city council took note of his speech. A faction also commented that it would be better for him to report this story in The Hague. ‘The Hague is not listening to us’, was the response. After which mayor Welten proceeded to the order of the day.

After thunderous and approving applause, Mr Koenderink’s supporters left the public gallery. End of a unique example of the right to speak for citizens of Haaksbergen.

A production of RTV Sternet

Update Brazil – Light at the End of the Tyrannical Tunnel? [VIDEOS] 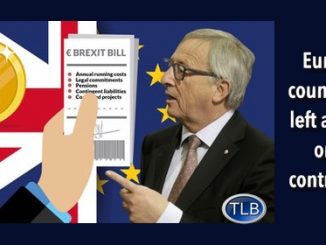 McKinsey Won Dutch Covid Contracts Without a Call for Tenders