To anyone with even a trace of patriotic feeling for his own country, perhaps the most stinging rebuke Donald Trump aimed at Hillary Clinton last year was when he compared her to German Chancellor Angela Merkel, a «catastrophic leader» who has «ruined Germany»:

«Hillary Clinton wants to be America’s Angela Merkel. And you know what a disaster this massive immigration has been to Germany and the people of Germany–crime has risen to levels that no one thought they would ever see. We have enough problems in our country, we don’t need another one».

The soft-hearted Trump was being far too charitable to both Clinton and Merkel. Had Hillary been given control of a country far more powerful than Germany, there’s no limit to the harm she might have inflicted on America and the world. And of course Merkel’s open door migrant policy is a mortal danger to all of Europe, not just to Germany. 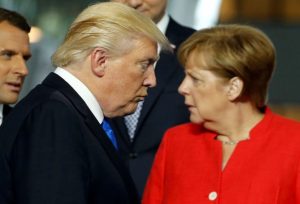 When Trump showed up in Brussels and Sicily to meet with NATO, EU, and G7 leaders, there was already no love lost between him and Merkel, as evidenced by his apparently deliberate snub of her proffered handshake when they met in Washington in March. Rather than use the May meetings as an opportunity to smooth ruffled feathers, Trump doubled down by lecturing our European satellites on their failure to meet NATO military spending targets and by his unwillingness to declare America’s absolute commitment to defend the very same deadbeats. He also complained about the EU’s trade practices, meaning really Germany’s trade practices.

To top things off, he declined to burn incense before one of the globalists’ most sacred idols, the Paris Climate Change Agreement. Merkel wasted no time in denouncing the blaspheming infidel who had befouled the holy precincts. Front and center in her admonishment was Trump’s questioning (not rejecting yet, just questioning) the Paris Agreement, which Merkel called «very dissatisfying». She then unleashed what in her mind and those of globalists elsewhere what she regarded the worst of all possible insults – that Trump was going «out on a limb» by putting his own country’s interests first:

«‘Recent days have shown me that the times when we could rely completely on others are over to a certain extent,’ Merkel said.

«‘We also know that we Europeans must really take our fate into our own hands, of course in friendship with the United States of America, in friendship with Great Britain and as good neighbors wherever that is possible also with other countries, even with Russia.’

«‘Anyone who today puts on national blinkers and no longer has eyes for the world around him is, I am convinced, ultimately out on a limb.’»

No doubt Merkel’s comments were largely geared to a domestic German audience in advance of elections in September. Leaders of her main opposition (and current «grand coalition» partners) in the SPD, who are even more anti-Trump and anti-nationalist than Merkel, if that’s possible, were quick to second her remarks.

The anti-Trump establishment in the United States also piled on to take Merkel’s side against Trump in what many outlets described as an impending U.S.-Europe «divorce»: 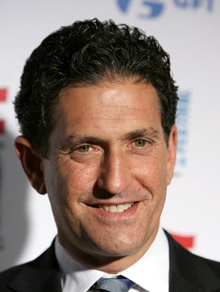 But the trophy goes to former Hillary Clinton consigliere Jamie Rubin (and husband of CNN’s top propagandist for aggression Christiane Amanpour) (pictured), notorious for his blatant lying as State Department spokesman in support for Bill Clinton’s and NATO’s illegal attack on Serbia in 1999. Praising Merkel as the new «leader of the free world», Rubin lauded the German chancellor for her migration open door and deep-seated hostility to Russia, neither of which is particularly in Germany’s interest.

This is, of course, the root problem of any go-it-alone «leadership» from Merkel. In the end, she is standing up not for Germany but for the basket of politically correct issues Chinese social media users mock as baizuo (literally, «white left»), a term that perfectly describes Merkel and her admirers on both sides of the Atlantic:

«…baizuo is used generally to describe those who ‘only care about topics such as immigration, minorities, LGBT and the environment’ and ‘have no sense of real problems in the real world’; they are hypocritical humanitarians who advocate for peace and equality only to ‘satisfy their own feeling of moral superiority’; they are ‘obsessed with political correctness’ to the extent that they ‘tolerate backwards Islamic values for the sake of multiculturalism’; they believe in the welfare state that ‘benefits only the idle and the free riders’; they are the ‘ignorant and arrogant westerners’ who ‘pity the rest of the world and think they are saviors’».

Oddly, one of the first speculations raised by commentators on Merkel’s «take our fate into our own hands» remark is whether it would lead to the formation of an «EU army» to replace the departing

Americans. (To be fair, perhaps the ideological changeover from American-led trans-Atlanticism to German-led transgenderism wouldn’t be all that great, given trends in recent years.) Still, one wonders which European countries would sign up for a military structure dominated by Berlin on a continent already subject to German economic hegemony. Starting with Germany itself, would countries that bristle at Trump’s demand for spending two percent of GDP on the military be more forthcoming with Merkel in charge? To defend themselves from whom, exactly – the mobs of migrants, liberally interspersed with jihadists and rapists, that Merkel is determined to let in? Would the Poles, who already spend more than two percent and who hate and fear Germans and Russians in roughly equal measure, participate?

Of course there are some nostalgic attractions. For example, there are many in Latvia and Estonia who no doubt would be thrilled to get their old SS uniforms out of mothballs. Merkel can surely count on the HDZ-led government in Croatia, which is openly rehabilitating that country’s Ustaša past. (Hint to Merkel: Maybe Culture Minister Zlatko Hasanbegović would allow the new EU army to borrow under license their copyrighted slogan, «Za dom spremni!» ©). No doubt the effort would be cheered along by some Americans, like former U.S. Director of Central Intelligence James Clapper, who recently declared that «historical practices of the Russians» are «almost genetically driven» . . .

Which brings us back to the thorny question of Russia. The anti-Russian hysteria in the U.S. (which 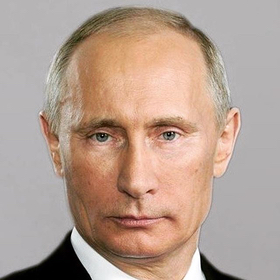 recently has taken a curious anti-Jewish turn) has so far blocked any serious attempt by the Trump administration to achieve normalization of U.S.-Russia ties. But if the decoupling of the U.S. from Europe dreaded by the globalists in fact comes to pass, we may see both Washington and Berlin seeking to mend some fences with Moscow. In her anti-Trump tirade, Merkel magnanimously made a point of suggesting she would get along «even» with dastardly Russia. Would her Paris satrap Emmanuel Macron have proceeded with Vladimir Putin’s recent visit commemorating 300 years of French-Russian relations if Merkel had been opposed?

Whatever her preferences, maybe Merkel has no choice but to seek her own «Rappallo» if she is to avoid the bind Germany has found itself in twice in the last century – a two front war. (Presumably this time it would be only ideological and moral, not a shooting war.) Simply put, she may have to decide which of the two, Trump or Putin, she hates more.

Actually, from an America First point of view, confronting Germany and the failing EU/NATO complex from both east and west isn’t a bad idea. As pro-Trump commentator Ann Coulter suggested in a tweet, «We should form a military alliance with Russia to protect it from Western Europe» and its migrant hordes. Maybe that’s what Trump had in mind in the first place.

Germany is the Rotten Heart of Europe, By Design 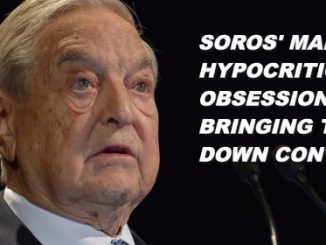