Jérôme Rodrigues, one of the charismatic leaders of the Yellow Vest movement in France lost an eye during a protest in February this year. It was no accident, says an informed reporter.

PARIS – During a demonstration in Paris, Rodgrigues (see featured image) was hit in the face with one of the infamous flash ball projectiles fired by police, and lost an eye as a result. In an interview broacast on French TV, the journalist Antoine Peillon asserted that Rodrigues was deliberately selected as a target by the police. 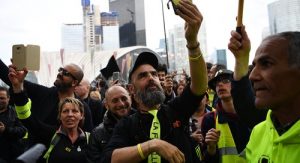 “My sources tell me that Jérôme Rodrigues was targeted. This man was becoming extremely popular. He is charismatic, and this is for that reason that he was targeted,” said Peillon. (ER: the image of Rodrigues, right, was taken after his eye injury)

“I’ve been collecting testimonies from people whom I take totally seriously — police officers — both in the world of security and in the world of law enforcement, who tell me he was targeted. Jérôme Rodrigues, who lost his eye at the Bastille in a Yellow Vest action, I think at the beginning of February, I think that’s the day, in unbelievable circumstances: he was totally peaceful.

“He was there even calling for calm in the [tense] atmosphere, which was getting out of control, and first he got a crowd-control grenade at his feet, and, almost right away, instantly, a LBD 40 bullet in the eye, which he then lost.”

According to Peillon, Rodrigues himself has no doubt concerning the reason why he lost his eye. Almost immediately after the incident, he blamed the use of the LBD 40, which was already being questioned [as a weapon] at that time.

“The total denial by the Paris prefect, by the Security Minister — let’s call him that — Mr. Laurent Nunez, and by the Interior Minister Christophe Castaner, who [all three] say: ‘It’s impossible, it’s impossible’.

“And finally it seems that, several days later, a gendarme had to admit that he did in fact shoot an LBD, even if he denied that it was a shot of an LBD directed against Jérôme Rodrigues.”

His sources have told Peillon that the authorities had wanted to silence Rodrigues because he was seen as a threat. 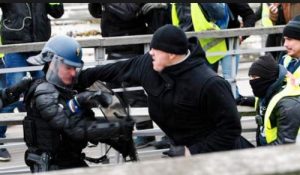 “So, precisely therefore, I would like to add. There was also a fear that Christophe Dettinger (pictured) might become a hero, and that’s why he’s being martyred, that he’s prevented from… he’s being imprisoned, in a way, to hide him, to forbid him to speak out, which is currently the case. He cannot.”

According to Peillon, police officers would never commit the senseless act of just harming any protester since they would face disciplinary action. “We see very well that those police officers who shot LBDs have their orders.”

Peillon explained that there are very specialized people within the police, “both in intelligence, and in the actions which are consequences of intelligence, who are targeting the movement’s leaders, as special services commandos, when there’s a necessity to defuse a dangerous situation”.

He said these specialists within the “BACs” [anti-criminality brigades], are highly trained in the use of the LBD 40.

“There are allegedly officers who are very well-connected, extremely well-connected with these [specialist] police units, the intelligence police of the special services and of special action squads.”

Yellow Vests: A Big Day of Protest Planned for September 12

Six months after it began, the oligarchs/Macron versus Gilets Jaunes battle is still raging and will keep on