Hungary refuses to back down faced with revenge from EU elites

The European Union has triggered infringement proceedings – the so-called Article 7 sanction mechanism – against Hungary for alleged breaches of “democratic values”.

The infringement was voted in after a European Parliament report concluded that the Hungarian government posed a “systematic risk” to “EU values” because of Hungary’s judicial independence, freedom of expression, safeguarding of minority rights and their limiting of nefarious NGO activities.

Prime Minister Viktor Orban has called it an act of revenge by a leftist European elite trying to punish Hungary for its legal challenge to open borders.

The prime minister’s spokesman Zoltan Kovács said in response: “You have to recognise what is going on. This is a political attack.”

According to the Prime Minister, in contrast to the European Commission’s proposal, the borders of Hungary will be protected by Hungarian soldiers and police officers, and the country will not accept any kind of resettlement programmes imposed by the EU.

In Orban’s video message posted on his Facebook account, which was recorded on Wednesday on his way to the three-day summit of the heads of state and government of EU member states, he said the European Commission continues to manufacture resettlement programmes at full speed.

“They continue to want to take away from us our right to border protection, and they want to tell us who may reside in Hungary and in the rest of the countries of Europe”, Orban explained.

Orban highlighted that regarding proposals of this nature, the Hungarian position is clear: “our borders will be protected by our soldiers and police officers, and we will not accept any kind of resettlement programme”.

He told Hungarian radio earlier: “In the European Union they simply solve this problem by saying that demography is a science of numbers, and that there is a shortage of people. ‘Let us replace them with people from elsewhere’.

“What we can say is that we do not want numbers: we want Hungarians. We want as many children as possible to be born, and for that we need families. And for each family, if possible, we need a mother and a father — a man and a woman.”

Gay marriage in Hungary is prohibited under constitutional amendments which were passed in 2011 by Orban’s government.

Guy Verhofstadt, the group leader of the Liberals in the European Parliament, has meanwhile launched a vicious attack on Hungary’s leader.

In a Thursday interview to Hungarian weekly 168 Ora, Verhofstadt called on the European People’s Party, to which Orban’s party Fidesz belongs, to distance itself from the Hungarian leader “and send him where he belongs, the dung heap of history, along with his new populist friends”. 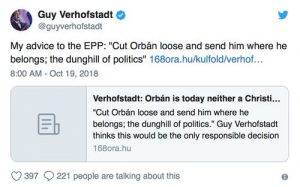 He added that the Hungarian prime minister was “no longer a Christian nor a democratic leader”.

But Balazs Hidveghi, the ruling Fidesz party’s communications chief, told public media on Thursday that Verhofstadt “preaches Christianity and democracy while presenting one of the biggest dangers to those values”.

He accused Verhofstadt of being a “maniacally pro-migration politician who represents the interests of [American financier] George Soros and migration to the point of obsession”. He also promotes the idea of a United States of Europe, he said, adding that both endangered a strong European Union.

Hidveghi said an EP election in May will provide a chance “to stop Guy Verhofstadt and his mates” from turning Europe into “a continent of migrants”. 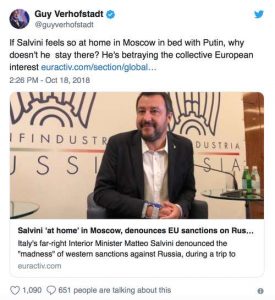 Nigel Farage last year accused Verhofstadt of directly lobbying for George Soros. “We even had last week Mr. [Guy] Verhofstadt lobbying on behalf of Mr. Soros at the Conference of Presidents in a battle that is going on with Viktor Orban, the prime minister of Hungary,” Farage said, pointing directly at Verhofstadt as he spoke.

“I wonder,” Farage continued, “when we are talking about ‘political collusion,’ I wonder if we are looking in the wrong place.”

Orban, in a video posted on his Facebook page on Thursday, said that the debate on migration was not over yet. “Some people think that migration is a good thing and they keep pushing on,” he said. “We think it is dangerous.”

Deadly knife attack in Lyon revives immigration debate – what to do about failed asylum seekers?