Do you realize that aluminum adjuvants in vaccines do not require clinical approval?  It’s the vaccine that gets approval—that’s the technicality as delineated by various independent vaccine researchers!

That being said, aluminum is a nerve toxin with neurotoxic adverse effects and probable “cause and effect” associations for various diseases, most notably Multiple Sclerosis, where the myelin sheath is destroyed.

Another life-altering disease, as clinically established by French researchers and doctors at Henri Mondor Hospital in Paris, France, is MMF (Macrophagic Myofasciitis, a rare muscle disease) which Henri Mondor has become a focal research center for due to researchers there confirming the findings that aluminum in vaccines is the apparent “cause and effect,” especially high-aluminum-adjuvant vaccines like a HPV (Human papilloma virus) vaccine, which have caused severe life-altering, adverse health reactions in young girls, and boys too!

Researchers at Mondor notified the U.S. CDC that MMF may be caused by vaccines / vaccinations.  I wonder what the CDC did with that research.

Aluminum hydroxide is the most popular of four formulations of aluminum that can be used in vaccines.  It was made available in 1927, when it was ‘thought’ to be ‘safe’ with no updated scientific safety studies!  Talk about modern medicine and pharmacology living in the past, but propagandizing they are “state of the art” medicine!

Historically, aluminum seems to have gotten a “clean slate” which, like the microwave industry, relies on antiquated documentation because recent research would declare both microwaves and aluminum as neurotoxins!  Here’s some of that ancient aluminum research, which needs updating in the minds of big business:

In 1997 the aluminum adjuvant was tested in the USA using a radioactive isotope of aluminum injected into TWO rabbits and then measuring the level of radioactive aluminum the rabbits excreted in their urine.  After 28 days, only 6% of the aluminum was excreted; 94% remained in the rabbits!  Now here’s the apparent skullduggery involved in that research:  Researchers “lost” the rabbits bones, the biological site where aluminum is stored, and it is suggested the bones were destroyed!  Two rabbits, a 28 day study with no further research and no one can find the specimens, which should have been catalogued.  Interesting?  Another story based upon the above rabbits is that the World Health Organization apparently compounded the aluminum adjuvant problem further by applying the two-rabbit-28-day-research to humans, which only muddied the ‘science’ that much further.

Aluminum, or aluminium as known elsewhere, is a very biologically reactive material, which needs to be removed from vaccines, medicine, and the chemical mix being sprayed in Solar Radiation Management (SRM) aka “chemtrails”.

However, Henri Mondor researchers have documented—and catalogued—a library of aluminum and MMF patients’ information.  As a result, that hospital has gained the reputation as an expert resource for researching both.  Researchers at Mondor have been taking biopsies of deltoid muscles, where vaccines usually are given, and found aluminum lodged within those muscles, plus those patients biopsied also presented MMF symptoms and deteriorating health, often for numerous years without proper diagnoses!

Historically, there was a time when French vaccine maker Pasteur Institute used a safe and aluminum-free adjuvant in its vaccines?  What happened?  Sanofi purchased Pasteur and…

Calcium phosphate was used as an adjuvant in France in diphtheria, tetanus, pertussis and poliomyelitis vaccines. It was later completely substituted by alum salts in the late 80’s, but it still remains as an approved adjuvant for the World Health Organization for human vaccination. Area covered: Thus, calcium phosphate is now considered as one of the substances that could replace alum salts in vaccines. The aim of this paper is to draw a review of existing data on calcium phosphate as an adjuvant in order to bring out the strengths and weaknesses for its use on a large scale. Expert commentary: Calcium phosphate is a compound naturally present in the organism, safe and already used in human vaccination. Beyond comparisons with the other adjuvants, calcium phosphate represents a good candidate to replace or to complete alum salts as a vaccine adjuvant.

Calcium phosphate is a family of materials and minerals containing calcium ions (Ca2+) together with inorganic phosphate anions. Some so-called calcium phosphates contain oxide and hydroxide as well. They are white solids of nutritious value.[  Wikipedia https://en.wikipedia.org/wiki/Calcium_phosphate

Pasteur Institute used calcium phosphate in its vaccines made in France during the 1980s but stopped using it in 1987 in favor of the health-damaging forms of aluminum that are found in all vaccines since.

There was an aluminum-adjuvant-free DTP (Diphtheria, Tetanus, and Pertussis) vaccine!

A rather interesting aspect about calcium phosphate is the fact that it costs much less as a vaccine ingredient and, therefore, resulted in much cheaper vaccines on the market!  Follow the money?

Since that formulation apparently is produced through genetic modification, CaP-NPs apparently can/will pose other unknown health risks when placed into the human body, even though calcium phosphate is a safe adjuvant but modified to be attached to a man-made nanoparticle, which human physiology has not had to deal with during the evolutionary processes.

Nanoparticles always are a guarded ‘scientific’ aspect of the patent process in order to obtain a specific patent for a vaccine.  That’s what it’s all about: Patent Vaccines with proprietary-interest-free and product-liability-free legal status from damages, a special corporate perk gifted to vaccine makers by the U.S. Congress 1986 vaccine law.

However, GM nanoparticles are the desirable “proprietary interest” part of “trade secrets,” which are not divulged to the CDC/FDA during vaccine licensure processing stages or to healthcare consumers in vaccine package inserts after entering the healthcare market place.

Much more information can be learned about aluminum in vaccines from the DVD “Injecting Aluminum, How Toxic Are Vaccines?” available on Amazon.com produced in 2017 by Cinema Libre Studio, the same folks who brought us the DVD, VAXXED, From Cover-up to Catastrophe.

Catherine J Frompovich (website) is a retired natural nutritionist who earned advanced degrees in Nutrition and Holistic Health Sciences, Certification in Orthomolecular Theory and Practice plus Paralegal Studies. Her work has been published in national and airline magazines since the early 1980s. Catherine authored numerous books on health issues along with co-authoring papers and monographs with physicians, nurses, and holistic healthcare professionals. She has been a consumer healthcare researcher 35 years and counting.

Her 2012 book A Cancer Answer, Holistic BREAST Cancer Management, A Guide to Effective & Non-Toxic Treatments, is available on Amazon.com and as a Kindle eBook.

Two of Catherine’s more recent books on Amazon.com are Our Chemical Lives And The Hijacking Of Our DNA, A Probe Into What’s Probably Making Us Sick (2009) and Lord, How Can I Make It Through Grieving My Loss, An Inspirational Guide Through the Grieving Process (2008)

Vaccines and the Liberal Mind 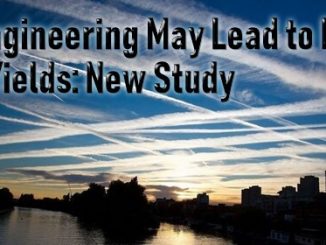 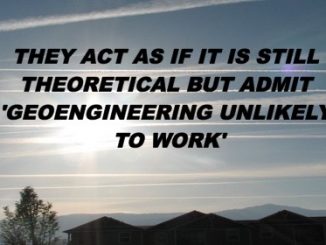 Geoengineering Not Likely to Work