Four score and seven years ago our fathers brought forth on this continent, a new nation, conceived in Liberty, and dedicated to the proposition that all men are created equal.” –President Abraham Lincoln, The Gettysburg Address.

While the idea of a U.S. president having the courage to defy the Jewish lobby and promote the concept of justice and human rights for the Palestinian people may initially appear as being preposterous, the possibility of it actually unintentionally becoming a reality is not that far fetched considering Trump’s “accomplishments” during his first year in office. He began his presidency by immediately helping to establish a global consensus of opinion that he was an illiterate, incompetent, insane, and inveterate liar with one mental health professional at a Yale School of Medicine conference stating “we have an ethical responsibility to warn the public about Donald Trump‘s dangerous mental illness.” (Source)

Setting aside Trump’s apparent mental instability, there is also the question of his propensity for racism as was confirmed by his travel ban “Protecting the Nation from Foreign Terrorist Entry into the United States” — which despite its implied concern for U.S. security — was in fact a blatant act of racial discrimination against the Muslim-majority countries of Iraq, Syria, Iran, Libya, Somalia, Sudan, and Yemen. Furthermore, subsequent to his becoming President, Trump has surrounded himself with top advisers and cabinet officials whose careers were checkered by accusations of racially biased conduct. (Source)

Trump’s manic predilection for conflict has had him escalating attacks not only against immigrants, but also the media and the intelligence community with the most significant escalation being in the so-called War on Terror — resulting in a substantially increased U.S. commitment in Yemen, Syria and elsewhere — with the probable consequence that the U.S. will be drawn deeper into some of the world’s most intractable conflicts – conflicts that are mostly of its own creation. (Source)

Another potential conflict is now being posed by Trump’s itching desire to “denuclearise” North Korea, a country which the U.S. has already subjected to starvation, prevention from access to foreign finance and international trade, strangulation of its economy with crippling economic sanctions, and the threat of lethal missile systems and military bases including a newly opened $11 billion base in South Korea.

U.S. hegemony, with its meddling in the affairs of other nations, has been a longstanding policy as is evident from the fact it is currently straddling the world with some 800 military bases in over 70 countries and territories and in more than a few of which on the basis of concocted intelligence — as was the case with Iraq allegedly having weapons of mass destruction — it has waged illegal wars and committed beyond belief depraved crimes against humanity. (Source)

Apart from Trump’s threat of a pre-emptive strike against North Korea, his most controversial provocation to date, however, has been the announcement of his decision to relocate the U.S. embassy from Tel Aviv to Jerusalem thereby recognising the latter as the capital of Israel and reversing seven decades of U.S. policy.The status of Jerusalem — with its Muslim, Christian, and Jewish holy sites — has been one of the biggest obstacles to reaching a peace agreement between Israel and the Palestinian people whose land Israel has been brutally and illegally expropriating with an arrogant impunity which the rest of the world — either because of selfish indifference or the sheer terror of being bullied with accusations of anti-Semitism — has unconscionably tolerated without condemnation. (Source)

Trump’s outrageous Jerusalem decision — presaged by a pledge designed to win the Jewish vote during his presidential campaign — has, however, served to finally focus some long overdue global attention on the iniquity of the situation in Palestine. Consequently, an otherwise mostly somnolent Muslim world with regards to the plight of Palestinians suddenly found its voice to denounce what it viewed as a threat to Islamic holy sites; numerous and usually silent world leaders expressed concern that the move could ignite new violence and bury any hope for resolving the Israeli-Palestinian conflict; and even a Jewish lobby-controlled British government joined 13 other members of the UN Security Council to vote in favour of a resolution — vetoed by a U.S. subservient to the Israel Public Affairs Committee (AIPAC) — calling for Trump to rescind his declaration in a move that showed the depth of global opposition to the move. (Source) 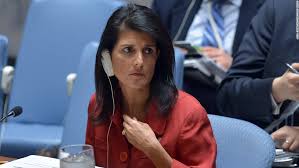 The UN Security Council’s emphatic rejection of Trump’s declaration was then met by a threat to the UN General Assembly by a fork-tongued Nikki Haley, the U.S. ambassador to the international body forewarning that the U.S. “will be taking names” of those who vote to condemn President Donald Trump’s unilateral decision to recognise Jerusalem as Israel’s capital, and pressure him to rescind his declaration. Haley’s threat was subsequently reiterated by Trump in one of his familiar raving loony rants. (Source)

Notwithstanding the menacing mobster nature of such threats, the UN General Assembly uncharacteristically abandoned its usual spineless response to American-Israeli high-handed bribery, blackmail, and bullying, and instead did “the right thing” by delivering a humiliating blow to “American exceptionalism” and “God’s chosen” by declaring Trump’s controversial decision to recognise Jerusalem as Israel’s capital “null and void.” (Source) 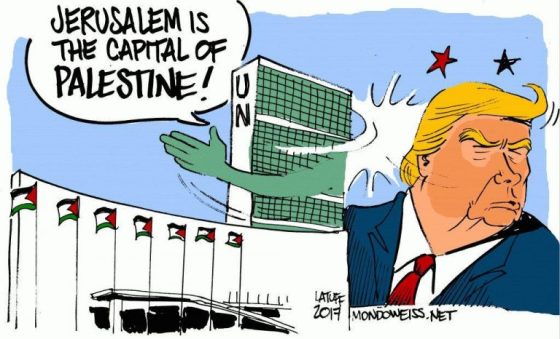 Instead of delivering on his promise to “Make America Great Again,” Trump has so far managed to do the exact opposite with many of his key policies being broadly unpopular and causing America’s global standing to plummet. Significantly, Israel and Russia — bearing in mind that the CIA, FBI, and NSA have jointly stated with “high confidence” that the Russian government conducted a sophisticated campaign to influence 2016 presidential election — are the only countries where Trump’s approval rating surpasses that of former President Obama. (Source)

Trump’s current U.S. approval rating of around 30% reflects the fact that many Americans — including quite a few of those who voted for him — are waking up to the reality that theirs is dysfunctional, sick society governed by mostly corrupt “Israel first” members of Congress who, along with the present occupant of the White House, have seriously undermined U.S. influence on the world stage and diminished global respect for a nation that still regards itself as a superpower with formidable clout in foreign policy: a  foreign policy which — particularly with regards to the Middle East — is to a greater extent closely in step with, and determined by Israel through its congressional stooges who are also responsible for overseeing implementation of the ideologies of militarism, brutality, and racism that the U.S. shares with Israel. (Source)

While the current reality of America’s decline and Trump’s dangerous foreign policy buffoonery may not directly or immediately advance the cause of the Palestinian people, they could nonetheless serve to place U.S. foreign policy under greater global scrutiny and condemnation; serve to focus the world’s attention on Trump’s Jerusalem decision as being a step that transcends current global acceptance of Israel’s illegal occupation; and serve to alert the American people that it is time for their government stop spending hundreds of billions of dollars on overseas military adventurism — including unconditional financial and political support for the Apartheid state of Israel — and instead start addressing some of the most pressing problems at home. (Source)

A further decline in American power and influence coupled with rising resentment amongst the American people could force the quislings on Capitol Hill to realign their political priorities with the needs of  “We the People” rather than those of the predacious “Chosen People.” In the event of that happening, Israel might be obliged to curb its arrogant oppression and displacement of the Palestinian people who, despite Israeli claims to the contrary, DO EXIST! But irrespective of what the future holds, the rest of the world must in the meantime not underestimate Judaism’s determination to achieve its longterm objective of building a “Third Temple” on the Old City’s Temple Mount irrespective of the cost to everyone else: an objective which can only culminate in disaster for the region, if not the entire world. (Source)

William Hanna is a freelance writer with published books the Hiramic Brotherhood of the Third Temple, The Tragedy of Palestine and its Children, and Hiramic Brotherhood: Ezekiel’s Temple Prophesy which is also due to be published in Arabic, Chinese, French,  Italian, German, Portuguese, Russian, and Spanish. Book and purchase information, sample chapters, reviews, other articles, videos, and contact details at: http://www.hiramicbrotherhood.com
Featured image courtesy of AP 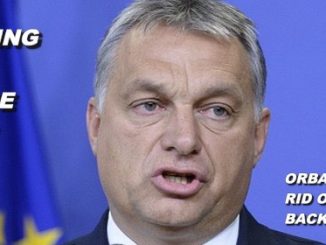 Hungary Cracks Down on all Soros-Funded NGOs 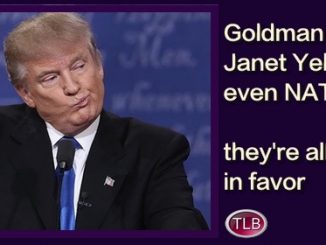 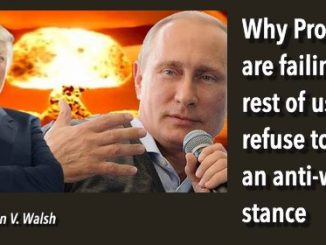