ER Editor: A previous report from Zerohedge on Sunday’s elections in the German state of Hesse (see map below) summarized the election as follows:

Two weeks after the Christian Social Union, Merkel’s Bavarian sister party, suffered a crushing blow in the Bavaria regional election, following the worst result for the ruling party since 1950, 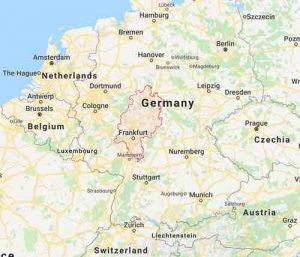 on Sunday Germany’s ruling Christian Democrats suffered another heavy election loss in Sunday’s regional election in Hesse, in a result that could further destabilize Angela Merkel’s grand coalition in Berlin.

Prime Minister Volker Bouffier’s CDU remained the strongest party on Sunday, but according to forecasts by German TV, the party achieved its worst result in the state in more than 50 years. The election was also a major hit for the Social Democrat party, which received its worst ever result in Hesse and saw its share of the vote fall by one-third compared to the last election in 2013.

Meanwhile, like two weeks ago, the clear winners were the left-of-centre Greens, which saw their share of the vote nearly double, while the anti-immigrant AfD continues to ride the wave of populist dissatisfaction with Germany’s political establishment. The Free Democrats (FDP) and Die Linke (Left Party) also remain in the federal state parliament in Hesse’s capital of Wiesbaden. That means that Hessen has a six-party parliament for the first time.

“The State Of The Government Is Unacceptable”: German SPD Leader Gives Merkel An Ultimatum After Devastating Loss

Angela Merkel’s junior coalition partners gave her conservatives until next year to deliver more policy results, threatening to end their alliance if there is no improvement after both parties suffered another round of crushing losses in today’s regional election in Hesse.

As reported earlier, Merkel’s conservative Christian Democrats (CDU) came home first in the election in the western state of Hesse, but took just 27.2% of the vote, a huge drop from the 38.3% the CDU won at the last Hesse election, in 2013 according to projections by German broadcaster ZDF. Meanwhile, Merkel’s center-left coalition partner Social Democrats (SPD) fared even worse, winning just 19.6% of the vote, down from 30.7% and its worst result in the western state in history. The party was on a par with the Greens, also on 19.6%.

After the disastrous results, SPD leader Andrea Nahles said she would use a “roadmap” with which to measure the progress of the ruling coalition, which has been plagued by infighting, at a mid-term review next year according to Reuters.

“We could then gauge the implementation of this roadmap at the agreed mid-term review, when we would be able to clearly see if this government is the right place for us,” Nahles told reporters. “The state of the government is unacceptable.”

Her ultimatum to the embattled Chancellor was clear: the SPD needs to show tangible results to its supporters next year or else the party’s leaders will pull out of the coalition with Merkel, resulting in a government crisis in Europe’s largest economy.

Merkel’s ruling coalition “has lost the confidence of the electorate”, said Josef Joffe, publisher-editor of weekly Die Zeit. He also slammed the SPD, saying “a party on the way down cannot suddenly rise from the ashes by going into the opposition. So the party grandees will clench their teeth, stay in the coalition and wait for a better day.”

Meanwhile, the incumbent CDU state premier in Hesse, Volker Bouffier and a Merkel ally, said his party had achieved its goal of being able to lead the next government in Hesse, but added: “We are in pain because of the losses”.

“The message to the parties ruling in Berlin is: People want fewer disputes and more focus on the important issues,” he said.

Shockingly, unlike various US politicians, he did not blame the Russians for the dramatic losses.

Today’s latest loss will have international implications well: the CDU’s poor result in Hesse, after its sister party in the state of Bavaria, the CSU, suffered its worst result there since 1950 two weeks ago, will “turbo-charge a debate about who succeeds Merkel and when.” Merkel’s weakness at home may limit her capacity to lead in the European Union at a time when the bloc is dealing with Brexit, a budget crisis in Italy and the prospect of populist parties making gains at European parliament elections next May.

While the CDU and the SPD suffered, the Greens and the AfD were delighted with another impressive result: the Greens strong performance in Hesse means Bouffier will likely be able to remain state premier at the helm of a CDU/Greens government. The other big winner was the far-right Alternative for Germany (AfD), which entered the Hesse regional assembly for the first time with 12.8% of the vote. As we reported earlier, the result also means the anti-immigration party, which entered the federal parliament for the first time last year, will now be represented in all 16 German regional assemblies.

While Merkel’s fourth – and surely final – government has already come close to collapsing twice, Nahles’ comments show the SPD will put more pressure on the conservatives to deliver policy results for the center-left party. Recall that Merkel’s CDU only formed a bitter national partnership with the SPD in March after the collapse of talks on a three-way coalition of the conservatives, Greens and pro-business FDP. The alternative would have been a government crisis.

Merkel’s historic collapse is the result of popular outcry to her disastrous “open door” policies: according to the ARD exit poll, only 13% of CDU voters believed Merkel had helped the party in Hesse, down from 70% at the last state election, which according to Reuters reflects “voter anger at her decision in 2015 to welcome almost one million, mainly Muslim asylum seekers.”

Next on Germany’s political agenda is the CDU’s annual congress in December, when Merkel will seek re-election as party chairwoman. While she is still expected to be reappointed, a weak show of support for her would undermine her authority and accelerate the succession debate. Merkel has said previously she could not continue as chancellor were she to lose that role.