The new leadership team of the EU is insane.

They learned nothing from May’s vote (ER: for the European Parliament), which saw the middle ground occupied by Angela Merkel lose ground. 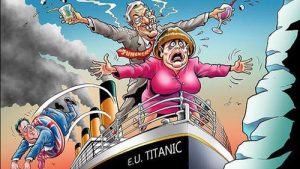 Euroskeptics doubled their representation while nationalist Greens gained ground as well. The European People’s Party lost significant clout and was forced into unprecedented haggling over the leadership bloc.

Merkel, now having no political future to protect, as her last act of betrayal to Germany engineered the ‘election’ of Ursula von der Leyen to replace Jean-Claude “When things get tough you have to lie” Juncker as European Commission President.

Von der Leyen is more of a euro-integrationist than Juncker was. It’s clear they circled the wagons knowing that, as Nigel Farage points out in this clip, the EU will look nothing like it does now in five years when her term is up.

So, it’s time to go for broke and push for everything before it all falls apart. But the trends are clear: von der Leyen is the past and Nigel Farage is the future of Europe.

More of everything EU is expected from them, and there’s every reason to take them at their word.

The only interesting thing von der Leyen said here was that they would be happy to offer another extension. That’s only interesting because it sets her at odds with French President Emmanuel Macron.

Of course, the EU is happy to keep the UK in limbo.

But here’s the rub. The Brexit Party is polling just behind Tories, who have rallied behind Boris Johnson to stabilize their poll numbers. Johnson has to keep talking No-Deal Brexit or the knives come out for him.

But the EU, regardless of what happens next week when the votes for Prime Minister are revealed, isn’t done with the UK.

They are still looking to send stern warnings to the rest of Europe.

Case in point is its pointless spat with Switzerland over stock market access, which went into effect on July 1st. The EU, spitefully and with full admission of sending a message to London, refused to extend existing agreements to allow Swiss traders to trade on EU bourses. The Swiss responded in kind.

Swiss stocks have well bid, there are no significant price arbitrages, and trading flows are adjusting because that’s what people do.

If the Swiss can stand up to the EU, who are surrounded by them and do much more business with them than the UK as a percentage of domestic trade, then so can London.

This was supposed to scare more City of Londoners into pushing for Merkel and May’s Terrible Treaty.

I think looking at the depths to which the EU will reach to maintain their present course is far scarier.

Mish has a great on the timeline of how to stop Brexit through a no-confidence vote. It’s worth every bit of your time. Basically, the window is closing on them quickly. And the Remainers, like Dominik Grieve, are running out of time to come up with a plan.

Parliament passed a motion that keeps Johnson from proroguing past the Halloween deadline. But, that’s wasted effort. They have less than a week to call for a vote of no-confidence to organize another election before October 31st.

Which brings us to the votes. Where do things stand?

Regardless of the votes in parliament, the polls are showing Remain will lose that fight. One poll from last weekend have the Tories (25%) and Brexit (21%) running first and second. An aggregate of recent polls yields a parliament could look something like this. 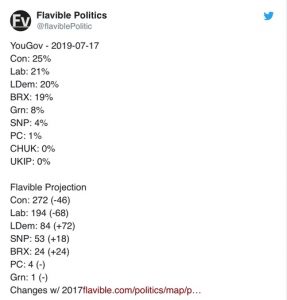 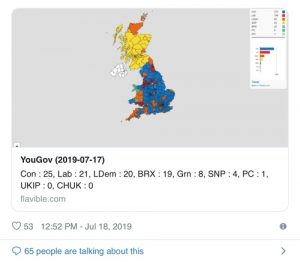 The time for a general election was back during the height of the Brexit focus and the original March 29th deadline. Labour leader Jeremy Corbyn had his chance before the EU elections, but his silence was deafening. 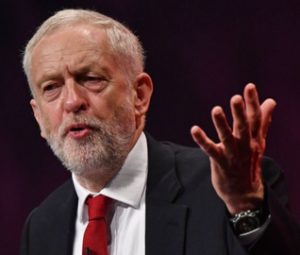 Because he didn’t have the votes. Now Labour have moved completely to the Remain camp and the polls create a lot of uncertainty. But that is their job, to muddy the waters and move public opinion, not reflect them.

If Corbyn goes for the vote of no-confidence, it will be because he has the votes in parliament to force the election. But in doing so, he will likely shift public sentiment the 3-5 points needed to create a Tory/Brexit majority that will deliver Brexit.

This is Mish’s point about how the currency markets are trading. With the pound collapsing, this is your signal that the markets think Brexit is happening. It’s also helping the euro levitate along with lovey-dovey noises from various FOMC members.

All of this depends on if (and this is a big if) Boris Johnson is actually committed to Brexit and isn’t just another stalking horse for the EU, like Theresa May.

It should be shocking that in all the time May was negotiating with the EU, she never once countered with a no-deal scenario. But it really isn’t. May was put in charge, like von der Leyen, to keep the European Project on track.

She should be tried for treason, in my opinion.

Farage is forcing this. Brexit is now very likely because Farage is pushing Johnson on what comes after Brexit. The Brexit Party is running a campaign on how to spend the savings from paying the EU’s blood money.

This is powerful stuff that speaks to the voters for the next election. Farage knows that the Brexit Party has to become more than just a single issue, that it has to brand itself as the solution for a post-Brexit UK. It’s the kind of branding that creates social movements and lasting political change, not fads.

The Tories + Brexit hold around 44-46% of the vote. Labour and the LibDems 38-40%. That seems to be the ceiling right now. They would need both the Scottish Nationalists and the Greens to form a government. It would scuttle Brexit and little else. But it couldn’t do it in time, regardless.

Flavible’s projections are now a combined 297 seats. I suspect this is a minimum projection for Brexit and the Tories given the methodology and data inputs. But if Johnson delivers Brexit, the death of Labour and the LibDem will be swift heading into 2020.

And don’t think for a second that von der Leyen and the rest of the Eurocrats in Brussels don’t understand this dynamic. They are every day looking more like a gang of Baghdad Bobs rather than world leaders.

Germany’s economy is rotting. The massive safe-haven trade into euro-zone debt on the promise of 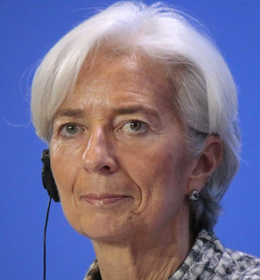 even more negative interest rates has nearly reached its limit. Christine Lagarde (pictured) heading the ECB will only ensure the rapid formalization of more consolidated power under it at the expense of national sovereignty.

When the dam breaks on EU monetary policy, a backroom deal between the IMF, ECB and the European Commission will come fast and at the last hour. There will be no votes on this loss of sovereigny for any euro-zone member.

As Germany’s economy rots, as Deutsche Banke falls and the rest of Europe is tied to the boat anchor known as the euro, the case against Remaining strengthens.

For simplicity’s sake, the fragile state of oil prices are your leading indicator on this. J.P. Morgan’s falling Composite Purchasing Manager’s Index is indicating this.

The crisis of confidence in the EU is coming at us full steam. Brexit has revealed not only the depths to which the people of Europe have been betrayed by their leadership but also the people pulling the strings behind the scenes.

Their collective insanity pushing for imperial, unaccountable control over the continent will be the thing that undoes their plans in the end. 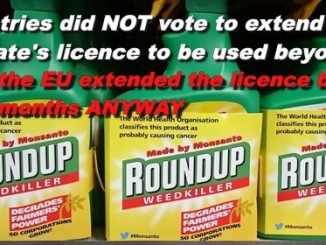 Glyphosate License – Sneaked past by EU during the UK Brexit week

The Dystopic Great Reset & The Fight Back: Population Reduction And Hope For The Children Of Men