ER Editor: Pepe Escobar below explains why the Kherson ‘retreat’ – moving people and military from the right (top, west) side of the Dnieper River to the other (left, east, bottom – it’s a little confusing) – is such a big deal politically. 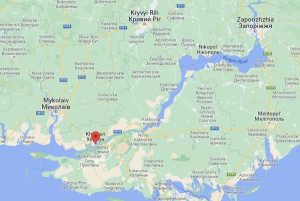 Escobar refers to a deal having been made regarding divvying up territory. Benjamin Fulford has a variation on that, that negotiations have already been made recognizing a historic arrangement, whereby Russia takes land east of the Dnieper River. Which puts Kherson city in an awkward position, on the other or ‘wrong’ side of the key river:

Russian Tass News Agency reports, for their part, confirm a secret deal negotiated between the Gnostic Illuminati and the WDS (White Dragon Society) is being put into motion. The deal is to return to an agreement between Frederick the Great and the Russian Tsar to use the Dnieper river as the border between their respective zones of interest. Tass now reports Russia is evacuating its troops and citizens to their side of the river.

But residents of Kherson can’t simply be evacuated across the river, which is a flood plain; there is a risk of flooding if the dam at Karkhovka upstream is blown up, which Ukraine has threatened. Quite a number of residents have already been evacuated into Russian territory beyond the Donbass region.

Kherson recently held a referendum to join the Russian Federation (along with Zaporozhiya and the Donbass) which makes it a Russian city, as Escobar reminds us, so it seems politically maladroit to now have to evacuate that area.

Deal or no deal, General Winter is coming to town – ready to entertain his guest of honor Sun Tzu with so many new dishes at their dinner table.

The announcement of the Kherson Retreat may have signaled one of the gloomiest days of the Russian Federation since 1991.

Leaving the right bank (upper) of the Dnieper to set up a defense line on the left bank (lower) may spell out total military sense. General Armageddon himself, since his first day on the job, had hinted this might have been inevitable.

As it stands on the chessboard, Kherson is on the “wrong” side of the Dnieper. All residents of Kherson Oblast – 115,000 people in total – who wanted to be relocated to safer latitudes have been evacuated from the right bank.

General Armageddon knew that was inevitable for several reasons:

no mobilization after the initial SMO plans hit the dust; destruction of strategic bridges across the Dnieper – complete with a three-month methodical Ukrainian pounding of bridges, ferries, pontoons and piers; no second bridgehead to the north of Kherson or to the west (towards Odessa or Nikolaev) to conduct an offensive.

And then, the most important reason: massive weaponization coupled with NATO de facto running the war translated into enormous Western superiority in reconnaissance, communications and command and control.

In the end, the Kherson Retreat may be a relatively minor tactical loss. Yet politically, it’s an unmitigated disaster, a devastating embarrassment.

Kherson is a Russian city. Russians have lost – even if temporarily – the capital of a brand new territory attached to the Federation. Russian public opinion will have tremendous problems absorbing the news.

The list of negatives is considerable. Kiev forces secure their flank and may free up forces to go against Donbass. Weaponizing by the collective West gets a major boost. HIMARS can now potentially strike targets in Crimea.

The optics are horrendous. Russia’s image across the Global South is severely tarnished; after all, this move amounts to abandoning Russian territory – while serial Ukrainian war crimes instantly disappear from the major “narrative”.

At a minimum, the Russians a long time ago should have reinforced their major strategic advantage bridgehead on the west side of the Dnieper so that it could hold – short of a widely forecasted Kakhovka Dam flood. And yet the Russians also ignored the dam bombing threat for months. That spells out terrible planning.

Now Russian forces will have to conquer Kherson all over again. And in parallel stabilize the frontlines; draw definitive borders; and then strive to “demilitarize” Ukrainian offensives for good, either via negotiation or carpet bombing.

It’s quite revealing that an array of NATO intel types, from analysts to retired Generals, are suspicious of General Armageddon’s move: they see it as an elaborate trap, or as a French military analyst put it, “a massive deception operation”. Classic Sun Tzu. That has been duly incorporated as the official Ukrainian narrative.

So, to quote Twin Peaks, that American pop culture subversive classic, “the owls are not what they seem”. If that’s the case, General Armageddon would be looking to severely overstretch Ukrainian  supply lines; seduce them into exposure; and then engage in a massive turkey shoot.

So it’s either Sun Tzu; or a deal is in the wings, coinciding with the G20 next week in Bali.

The art of the deal

Well, some sort of deal seems to have been struck between Jake Sullivan and Patrushev.

No one really knows the details, even those with access to flamboyant 5th Column informants in Kiev. But yes – the deal seems to include Kherson. Russia would keep Donbass but not advance towards Kharkov (north-east) and Odessa (further south-west). And NATO expansion would be definitely frozen. A minimalist deal.

That would explain why Patrushev was able to board a plane to Tehran simultaneous to the announcement of the Kherson Retreat, and take care, quite relaxed, of very important strategic partnership business with Ali Shamkhani, Secretary of Iran’s Supreme National Security Council.

The deal may have also been the inbuilt “secret” in Maria Zakharova’s announcement that “we’re ready for negotiations”.

These back channel negotiations have been going on for weeks. The messenger is Saudi Arabia. The US aim, in the short term, would be towards a sort of Minsk 3 accord – with Istanbul/Riyadh attached.

No one is paying the slightest attention to coke clown Zelensky. Sullivan went to Kiev to present a fait accompli – of sorts.

The Dnieper will be – in thesis – the settled and negotiated frontline.

Kiev would have to swallow a frozen line of contact in Zaporizhye, Donetsk and Lugansk – with Kiev receiving electricity from Zaporozhye, hence cease shelling its infrastructure.

The US would come up with a loan of $50 billion plus part of the confiscated – i.e. stolen – Russian assets to “rebuild” Ukraine. Kiev would receive modern air defense systems.

There’s no doubt Moscow will not go along with any of these provisions.

Note that all this coincides with the outcome of the US elections – where the Dems did not exactly lose.

Meanwhile Russia is accumulating more and more gains in the battle for Bakhmut.

There are no illusions whatsoever in Moscow that this crypto-Minsk 3 would be respected by the “non-agreement capable” Empire.

Jake Sullivan is a 45-year-old lawyer with zero strategic background and “experience” amounting to campaigning for Hillary Clinton. Patrushev can eat him for breakfast, lunch, dinner and late night snack – and vaguely “agree” to anything.

So why are the Americans desperate to offer a deal? Because they may be sensing the next Russian move with the arrival of General Winter should be capable of conclusively winning the war on Moscow’s terms. That would include slamming the Polish border shut via a long arrow move from Belarus downwards. With weaponizing supply lines cut, Kiev’s fate is sealed.

Deal or no deal, General Winter is coming to town – ready to entertain his guest of honor Sun Tzu with so many new dishes at their dinner table

Et voila! Notre-Dame’s Billionaires Come Out of the Woodwork – to Privatize It? 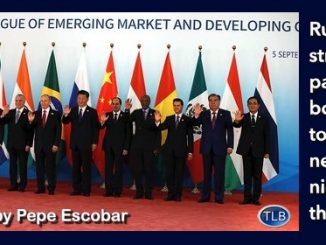