The news reported by Rambla Libre may be of particular importance in the military field, but also because of the arguments that this colonel presents to request the immediate suspension of the Covid vaccination in the armed forces. 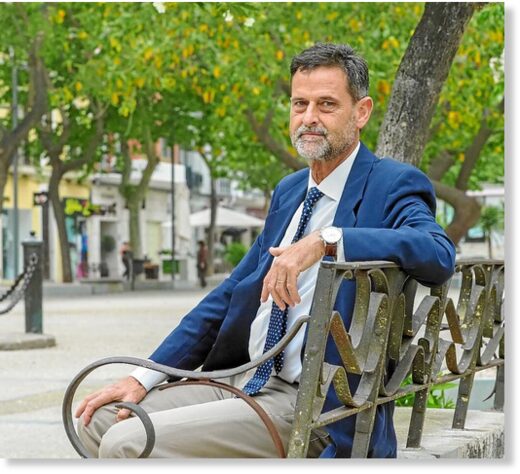 Carlos Martínez-Vara (pictured above), head of the Higher Studies Section of the Higher School of the Armed Forces (ESFAS), of the Higher Center for National Defense Studies (CESEDEN), and Colonel EA (CGEO), has written a text that we have saved for our readers:

The Spanish population, both in the civilian and military sphere, has received the recommendation of health authorities to be vaccinated against Covid-19 with drugs from different manufacturers, which, although not yet formally approved, are administered under the Environmental Protection Act.

The European Medicines Agency (AEMPS) has issued a conditional marketing authorization on an emergency basis.

There are enough publications in the scientific literature with analyses and studies conducted on these drugs, whose conclusions warn of the risk to human health due to the presence of toxic materials in the vials used. In this regard, on November 2, Dr. Pablo Campra Madrid, professor at the University of Almeria, published a micro-Raman spectroscopic study conducted on a random sample of vials of Covid-19 vaccines marketed by various pharmaceutical companies (Pfizer, Moderna, Janssen and Astra Zeneca), in which he concluded that he had detected objects that “unequivocally correspond to REDUCED GRAPHENE OXIDE”.

No less worrying is the study carried out by Dr. Sergio J. Pérez Olivero, whose October 3 report entitled “STUDY OF PANDEMIA – INDEPENDENT SCIENTIFIC ANALYSIS” concludes that these vaccines weaken the immune system, because the Spike protein, among other negative effects, “alters cell signaling by binding to the ACE2 receptor, which means that it orders the cell to change its functions, which is particularly serious in immune cells, because it makes them ineffective, facilitating inflammatory processes and susceptibility to disease by any pathogen”. In other words, according to this report, the population is gradually lowering its defenses against any disease by directly damaging the immune system with this protein.

These reports are backed by the highest scientific rigor, corroborated by post-marketing data from the U.S. Vaccine Adverse Event Reporting System (VAERS), and supported by similar findings reported by Nobel laureates, the very creators of mRNA vaccine technology, and the world’s leading biomedical professionals in the field of immunogenetics in countries such as the U.S., the U.K., Germany, France, Japan, and China, among others.

This natural immunity is undoubtedly superior to vaccine-induced immunity, as it includes innate immune defenses, and there is no proven benefit to date in administering these vaccines to people who have naturally developed antibodies because they have overcome the disease. On the contrary, scientific authorities in immuno-epidemiology believe that this strategy would compromise the immune status of the population by making herd immunity increasingly inaccessible, leading not only to a situation of perpetual dependence, but also to a progressive weakening of the population’s immune response with highly undesirable consequences.

However, incomprehensibly, the administration of at least one dose is imposed in the armed forces in order to perform a service commission, on board or abroad, without the need for a medical prescription, detailed information or informed consent prior to this inoculation.

This highly irregular circumstance is not governed by scientific criteria and constitutes a violation of countless rights, even promoting discrimination and other prejudices against military personnel who, appealing to their personal ethics, do not comply with this order.

This situation produces an obvious conflict of obedience in military personnel who, being in good health or even having developed antibodies against Covid-19, wish to fulfill their professional obligations within the constitutional framework.

The batches of vaccines currently marketed in Spain have not been analyzed by the laboratories of the Spanish Agency for Medicines and Health Products, having been allowed only through documentary review procedures, despite the potentially serious or very serious clinical risk to the population that would be represented by the presence of foreign particles in liquid parenteral preparations such as the aforementioned vaccines.

The Ministry of Defense has, for reasons of national security, an additional and independent methodology in the area of reception and quality control of materials that requires significant sampling according to an established reference sample, in compliance with the defined specifications and the approval of batches with the signature of a responsible. It is also understood that this acceptance procedure is repeated each time a new lot is generated, requiring in all cases the transparency of the supplier for an audit by the Quality Managers of the Ministry of Defense to collect the data and results of the tests of the manufacturer and supplier, and the analysis of the samples selected in each lot, without proceeding to the use of these lots until their approval by the Quality Managers of the Ministry of Defense.

The FAS Pharmacology Department has the technical capacity to perform the relevant analyses of the above-mentioned vaccine vials or to supervise the correction of those it subcontracts in order to verify the absence of any toxicity that could affect the quality and safety of the vaccines.

The presence of these elements in a vaccine would constitute a violation of the obligation for pharmaceutical companies that manufacture and/or import the aforementioned vaccines to comply with the requirements established by Chapter IV of Royal Decree 824/2010 of June 25 (which regulates pharmaceutical laboratories, manufacturers of active pharmaceutical ingredients and foreign trade in medicines and experimental medicines) dedicated to the standards of good manufacturing practices. This would also imply non-compliance with the European Pharmacopoeia regarding the presence of particles in parenteral preparations.”

In view of the above, the Colonel requests:

For reference to the documents cited by the Colonel, click here.

The French Senate Votes an Amnesty for Elected Officials, Employers and Civil Servants!

Italy – Prosecutor Investigates Three Doctors, Including the One Who Gave the Second Injection