The US establishment is panicking over the release of Clinton’s emails while Ecuador is afraid its UK embassy may lose internet access, said Robert Steele, CEO of Earth Intelligence Network, on Ecuador’s decision to cut Julian Assange’s web access. 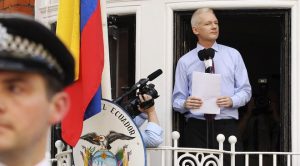 Ecuador admitted on Tuesday it has cut the internet access of WikiLeaks founder Julian Assange, saying his activities may be influencing the US presidential election.

WikiLeaks accused the US of pressuring Ecuador to stop the leaks of presidential candidate Hillary Clinton’s emails. However, the State Department denies the allegations. 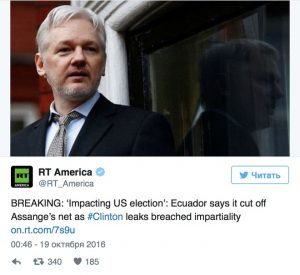 RT: WikiLeaks claims Washington is behind Ecuador’s decision to restrict internet access for Julian Assange, while the State Department denies that. So what is happening behind the scenes?

Robert Steele: Let’s start with Barack Obama and the director of national intelligence are lying to the public, as is the Time magazine cover story and the New York Times, and CNN – the Russians are not behind the electronic fraud. Stanford University has clearly established that Hillary Clinton stole the nomination from Bernie Sanders using electoral fraud. Now Julian Assange and all the emails that are going to be released on November 1 have absolutely brought the US establishment into a state of complete panic. There are stories about how Assange may even be turned over to the Americans. The bottom line here is – Ecuador is afraid that they will lose all of its internet access, because the city of London can easily cut off the Ecuadorian embassy as a whole. Assange is a pawn. The Clinton campaign is starting to realize that Donald Trump’s message about “the system is rigged” is now resonating all around the world and across the USA.

RT: Huge claims to make, but what proof is there?

RS: …If you just do a simple Google search for electronic fraud, you will find multiple documented stories from Stanford University to Princeton University, to others. Fully one-third of the Diebold machines have been demonstrated publically to be hackable. And not just hackable by insiders, but hackable by people with remote devices…

‘Attack on freedom of press, speech’

Sara Flounders, head of the International Action Center called the decision to cut off internet access “an attack on freedom of press.”

Sara Flounders: I don’t think cutting off internet access should be done. It is really an attack on freedom of the press and freedom of speech in a very real way. We all know that the US threatens, interferes and disrupts elections in countries all over the world. So for them to threaten Ecuador over Julian Assange’s ability to use the internet, to expose and reveal some of the cynical and calculated emails from the Hillary Clinton campaign – obviously they want to shut down any such news. They also want to use the internet to create all sorts of crises for other countries around the world. But they object when freedom of speech and revealing of documents is used against US politicians.

In their statement, Ecuador insists that they do not intend to hamper WikiLeaks journalistic activities. What do you think their motivation could be?

SF: Ecuador has given for more than four years asylum refuge to Julian Assange in their embassy in London. That is a very courageous act for a small country knowing the US record of imposing regime change, assassinations, coups around the world particularly on smaller countries that in any way challenge US policy. So it has been a very courageous thing for Ecuador to provide this asylum.

RT: Do you think that the Clinton information revealed by WikiLeaks is classified as journalism, or this is a concerted effort to stop one candidate from being elected?

SF: It is certainly not going to stop this candidate from being elected. There is enormous media support, and regardless of who is elected, US war crimes and policy will continue with either candidate. So is it an effort to stop? No, I don’t think so. It is an effort to expose a record behind Hillary Clinton, which is a way of informing the world as to exactly who this politician is. It is a very important part of access to what are the secret calculations that go on within the US electoral system, where we have very little to choose between either candidate and either party.

It is an important part of journalistic freedom of the press to know what is said in private by these politicians. We have a ‘sexual predator’ and a ‘drone predator’ running in US elections. And to reveal any information and give people, the world more information on who they are – that is an important role. I would applaud WikiLeaks exposés – they have been very, very important in showing what goes on behind the scenes and behind when US politicians speak, what they are really saying, and just how cynical and calculated they are. That is important information. So I would put this under freedom of information, freedom of expression, freedom of speech. 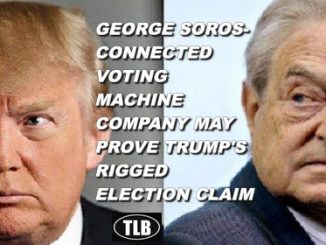