Alas, Marine Le Pen isn’t the hope of anyone looking for real change in France, but many French who can’t stand Macron will tell you that anyway. In fact, there are those who believe her grab for power is blocking a better, more authentic right-leaning option from developing, such as a movement led by her niece, Marion Marechal.

She heavily criticized Macron for bringing to a halt the lockdown when he did, which has decimated the French economy and left hundred of thousands unemployed, which was in no way justified on medical grounds anyway. Admittedly, she may have just been playing politics. But from her abandonment of Frexit, and other issues outlined below, she is simply the acceptable opposition within the mainstream. We wholeheartedly agree with author Guillaume Durocher‘s recent judgement of her in Unz Review:

[1] Even Marine Le Pen’s National Rally piled on against Valeurs (ER: French alt-right magazine taken to task for its fictional profile of a real black French MP portrayed as an African slave), proving yet again that her “nationalist” party is an epiphenomenal manifestation of the French politico-media system and exists only by the tolerable limits set by that system.

In regard to the TV interview tweeted out below, when Le Pen is asked what she thinks of mandatory flu vaccines for the over-65s (not covid vaccines) given the natural hesitancy of the French toward vaccines, she agrees that ‘all French should be vaccinated’ (referring to the over 65s presumably) and that compulsory vaccination of caregivers (such as in old people’s homes) is an ‘immediate obligation’.

Le Pen has shown herself to be well-informed on all manner of issues, yet she apparently doesn’t know that the flu vaccine renders someone more susceptible to what is being taken as ‘covid-19’ infection. According to a 2020 Pentagon study, profiled by Robert F. Kennedy Jr at Children’s Health Defense site, the flu vaccine leaves a person more susceptible to non-flu viral respiratory infection by up to 36%. Here is the link to the Pentagon study.  And here is what Kennedy’s site has said about it:

In searching the literature, the only study we have been able to find assessing flu shots and coronavirus is a 2020 US Pentagon study that found that the flu shot INCREASES the risks from coronavirus by 36%. “Receiving influenza vaccination may increase the risk of other respiratory viruses, a phenomenon known as “virus interference…’vaccine derived’ virus interference was significantly associated with coronavirus…” Here are the findings:

Kennedy’s article references other studies that reveal the same relationship of susceptibility between non-flu respiratory viral infections and flu shots. Even though this article is about Le Pen, we’ll list those independent studies here nonetheless:

When you ask French what they think of calls for mandatory vaccination, they’re well aware that there is a law dating from the early 2000s that makes mandatory vaccination illegal and feel confident they’re protected. But nothing can be taken for granted in these times. Le Pen, as well as the whole rotten political class, shows that.

Let Libre Penseur (‘Free Thinker’, who is a surgeon-dentist) vent about Le Pen.

(Translation: Marine Le Pen is in favour of the mandatory ‘flu vaccine for the over-65s and caregivers. There’s no doubt that it will be just the same for the vaccine developed hastily by Big Pharma at the start of 2021.) 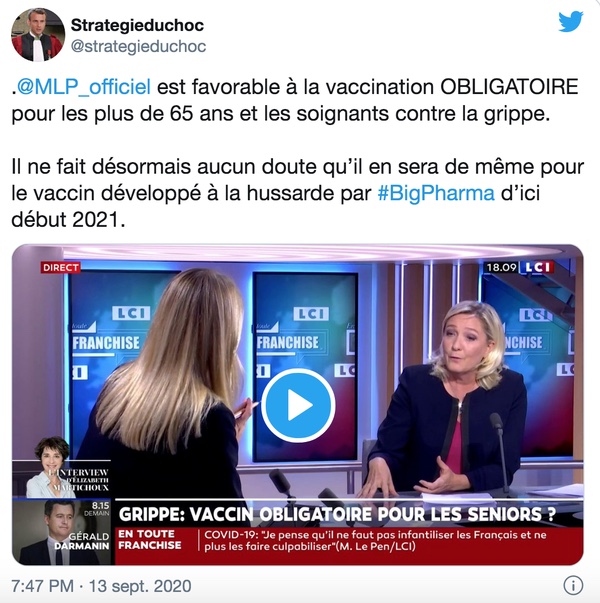 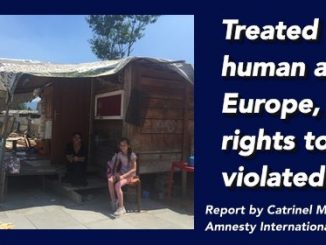 An Alarm Call to the World from Doctors [VIDEO]