ER Editor: We also recommend this piece by economist Tom Luongo titled Mo’ Money, Mo’ Invasion. on the left- and right-libertarian approach to immigration. Specifically in defense of Matteo Salvini’s latest move regarding the migrant allowance, he comments:

So, Salvini made a brilliant political move by highlighting this insane practice of paying people to come be subsidized by native Italians who, frankly, had very little say in the matter.

Because up until today I didn’t know Italy was paying these people €35 per day.  And I’m sure a lot of Italians didn’t either.  So, by cutting the allowance Salvini highlights the practice but doesn’t end it outright, leaving that decision to voters to continue to be outraged about.

It also puts both his coalition partners at Five Star Movement and the rest of the Italian political elite and media in a position to defend a practice that 60% of Italians are furious about, illegal immigration.

He can do this because the polls are trending in his favor.  Any disagreement with his coalition partner puts them on a path to call for snap elections and reversing the terms of the coalition since The League now out-polls M5S.  Salvini knows this and it’s why he can continue to push on this issue because it is 1) popular and 2) the right thing to do.

Salvini To Cut Migrant Allowance In Half, Saving €400 Million

According to Il Giornale, the proposal would slash by almost half the current daily allowance of €35 per day to only €19 per day, which would be one of the lowest rates in western Europe. And, according to the Interior Ministry, the cuts would lead to a saving of €400 million in 2019, rising to €500 million in 2020 and €600 million in the years thereafter, unlocking much needed budgetary savings for a country that remains [ER: text is missing]

The move would also be part of the broader migration and security decree released by Salvini in late September, which also banned residency permits for so-called humanitarian reasons. Migrants will now be classified into two groups: those with recognized asylum claims and those without, according to the Italian press. Those with refugee status and recognized underage migrants will have broader access to funding and government programs. 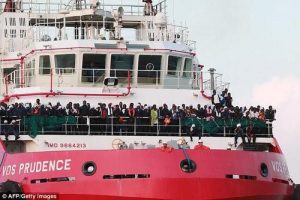 Salvini, who came into power riding on a platform vowing to crackdown on the number of inbound refugees, has managed to greatly reduce the number of migrants coming into Italy by closing Italian ports to migrant rescue NGO vessels who have been accused in the past of co-operating with people smugglers.

Having dealt with the issue of migrants entering Italy illegally, Salvini has recently set his sights on deportations of existing illegals according to Breitbart. Earlier this week he announced a new plan to invest €12 million to fund the deportation of at least 2,700 illegals starting in February and ending in 2021.

As reported back in 2015, one of the arguments proposed by advocates of mass migration and open borders has been using mass migration to counter the falling birthrates in western European nations, helping to boost Europe’s flagging GDP.

Salvini has made his opposition to this so-called “replacement migration” argument clear, saying: “I believe that I’m in government in order to see that our young people have the number of children that they used to a few years ago, and not to transplant the best of Africa’s youth to Europe.”

Instead, and pulling a page out of China’s playbook, Salvini has trying to motivate Italians to have more children, with the government offering free farmland to couples having three or more children. It is unclear if this strategy has any hope of working in a nation in which two-thirds of young adults still live with their parents.

Mainstream Policy Expert Reveals How He Was Silenced On Syria: “Truth Did Not Matter”