ER Editor: We had published an excellent piece on the issue of Turkey becoming a distribution and management point for Russian gas going into Europe by M.K. Bhadrakumar. See Russia Pays Homage to Nord Stream Pipelines and Moves On. Of note:

Russian President Vladimir Putin’s stunning proposal to Turkish President Recep Erdogan to build a gas pipeline to Turkiye to create an international hub from which Russian gas can be supplied to Europe breathes fresh life into this very “Gandhian” thought.

Putin discussed the idea with Erdogan at their meeting in Astana on October 13 and since spoke about it at the Russian Energy Week forum last week where he proposed creating the largest gas hub in Europe in Turkey and redirecting the volume of gas, the transit of which is no longer possible through the Nord Stream, to this hub.

Putin said it may imply building another gas pipeline system to feed the hub in Turkiye, through which gas will be supplied to third countries, primarily European ones, “if they are interested.”  …

However, Russia has done its homework that Europe cannot do without Russia gas, the present bravado of self-denial notwithstanding. Simply put, the European industries depend on cheap, reliable supplies of Russian for their products to remain competitive in the world market. …

Succinctly put, Putin has made a strategic move in the geopolitics of gas. His initiative rubbishes the hare-brained idea of the Russophobic European Commission bureaucrats in Brussels, headed by Ursula von der Leyen, to impose a price cap on gas purchases. It makes nonsense of the US and EU plans to put down Russia’s profile as a gas superpower. …

Now, Russia, Qatar and Iran together account for more than half of the world’s entire proven gas reserves. Time is approaching for them to intensify cooperation and coordination on the pattern of the OPEC Plus. All three countries are represented in the Gas Exporting Countries Forum (GECF).

Putin’s proposal appeals to Turkiye’s longstanding dream to become an energy hub at the doorstep of Europe. Unsurprisingly, Erdogan instinctively warmed up to Putin’s proposal. … 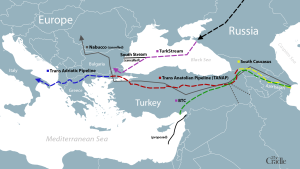 And so the work now begins.

It appears to be the Turkstream pipeline that will be used. According to The Arab Weekly,

Russian President Vladimir Putin has floated the idea of exporting more gas through the TurkStream gas pipeline running beneath the Black Sea to Turkey after gas deliveries to Germany through the Baltic Sea’s Nord Stream pipeline were halted.

Erdogan said Russian and Turkish energy authorities would work together to designate the best location for a gas distribution centre, adding that Turkey’s Thrace region, bordering Greece and Bulgaria appeared to be the best spot.

The aim is to ensure transparent and fair pricing in the global energy market, CEO Aleksey Miller says

The initiative is intended to help ensure transparent and fair pricing in the natural gas market, according to Miller.

The idea of creating a hub for gas supplies in Türkiye was proposed by Russian President Vladimir Putin in October. The president said this would allow Russia to redirect transits away from the damaged Nord Stream gas pipelines to the Black Sea region. He also noted that the gas hub would serve not only as a distribution platform but could also be used for determining gas prices and avoiding the “politicization” of energy. (ER: We remind readers that the EU has set price caps on energy, meaning that it tries to control the price of imported energy. Why should Russia agree if it means losing revenue? It can be a way to ensure more shortages within the EU, in fact. See this Reuters report.)

Turkish President Recep Tayyip Erdogan has welcomed the idea, claiming that the EU would be able to make purchases of Russian gas via his country.

Meanwhile, many Western countries, including the US, have criticized the plan. US State Department spokesperson Vedant Patel reiterated that Washington continues “to urge our allies to take steps to diversify their energy sources, to reduce energy reliance on Russia.”

He was echoed by French President Emmanuel Macron, who claimed that the proposal to turn Türkiye into a gas hub “makes no sense,” given that Europe aims to wean itself off Russian energy.