ER Editor: Curiously, a Guardian article on this new report by Policy Exchange puts another spin on it, claiming that the report shows the academic community actually has a tolerance for other, non-left viewpoints. Which is not a fair representation of the report. The Daily Mail takes another stance, titled Right-wing or pro-Brexit academics are ‘censored’ on British university campuses, report warns.

See this interview with one of the report’s authors, Remi Adekoya from Sheffield University (NB. The left/right distinction is being crudely represented as an anti-Brexit/pro-Brexit position, which is better described as globalist vs. the people. Today’s ‘left’ no longer represents ordinary people as it once claimed to.)

We remind readers of an article from 2017, where UK researcher James Caspian was unable to investigate the regret and disappointment transgendered people were experiencing as a result of undergoing full gender reassignment. Deemed politically incorrect, his research was refused funding by Bath Spa University. See University ‘turned down politically incorrect transgender research’.

This report from February 2020 gives insights into academic freedom in Germany, titled Academics claim political correctness has gone mad. There is much reporting that says precisely the same about US universities. That conservative views have little comfortable place on university campuses, especially in today’s ‘woke’ climate privileging identity politics, is hardly to be doubted for both academics and students. The question is, what can be done about it since the way a society moves forward and develops requires a body of academic research that doesn’t de-limit itself and self-censor at the outset.

Academic freedom in the UK is in peril, with universities increasingly hostile to right-wing views, a new study claims. Complaints about campus bias and ‘cancel culture’ are 10 a penny, but this one carries more weight than most.
.

“Britain’s universities are world-leading. Yet there is growing concern that academic freedom in these institutions is being undermined.” opens a report by Policy Exchange, a conservative-leaning think tank, published on Monday.

According to the report, one in four social sciences academics would be willing to support a dismissal campaign against a colleague who expresses right-wing views on multiculturalism, imperialism, parenting, or diversity in organizations. Right-leaning professors, outnumbered three to one by their left-wing colleagues, say that the climate in universities is hostile to their views. More than 60 percent of ‘very right’ professors perceive this hostility, compared to only 16 percent of those who identify as ‘very left.’

A third of all right-leaning academics say they’ve refrained from airing their views in teaching and research, compared to 15 percent of left-wingers.

However, the most divisive issue on campus appears to be Brexit. With only 17 percent of academics admitting that they voted leave, these leavers feel that the campus isn’t the place to air their views. In fact, just over half of all respondents said they’d feel comfortable sitting in a meeting or taking lunch with a leave voter. “[I’ve] been told leavers are fascists,” one leave voter who identifies as a “centrist” said.

Across the board, only three in ten academics think that a leave supporter would be comfortable expressing their views on campus. “I told someone I had voted leave and they called me a racist,” one such supporter said. “I voted leave but was scared to reveal this as my colleagues were so aggressive in their attitude,” another said.

Trans issues are a hot-button topic too, with only 37 percent of respondents saying they’d have lunch with someone who opposes admitting transsexuals to women’s refuge centers.

That a right-leaning think tank would highlight these issues is unsurprising. Opposition to ‘cancel culture’ has grown in recent months, even among prominent leftists. The so-called ‘Harper’s Letter’ is the most high-profile example of this opposition, having been signed by figures like JK Rowling and Noam Chomsky. However, the letter has been criticized for its limp stance, and its vague calls for “open debate.”

The Policy Exchange paper has some more concrete recommendations. It calls for the government to appoint a director for academic freedom to the Office for Students, to investigate violations of freedom of speech, and for violators of this freedom to face civil action. The Office of Students is instructed to fine universities for breaches of academic freedom, and universities are asked to adopt a commitment to freedom, along the lines of the Chicago Principles, signed by 72 universities in the US.

Policy Exchange has succeeded in influencing actual policy before. The government adopted one of its papers on reviving traditional architecture in 2019, and in 2016, the government took on board its advice that military personnel in combat zones be protected from lawsuits for all but the most serious breaches of humanitarian law.

The organization’s latest report has been backed by some prominent public figures. “It does the country no good if our educators, our academics, our scholars and, most importantly, our students feel that they can’t speak or engage without fear of retribution,” former Labour MP Ruth Smeeth wrote in its foreword.

In a statement to the media, Universities Minister Michelle Donelan added: “It is deeply concerning the extent to which students and academics with mainstream views are being silenced and discriminated against in our universities,” promising to “strengthen free speech and academic freedom.”

However, some of the more determined leftists are unlikely to be won over. “The idea that academic freedom is under threat is a myth,” University and College Union Secretary Jo Grady responded in a statement. “The main concern our members express is not with think-tank-inspired bogeymen, but with the current government’s wish to police what can and cannot be taught at university.” 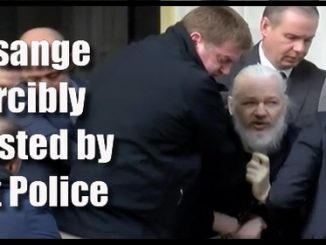 Julian Assange Has Been Arrested In London on US extradition warrant