The answer is that the crisis in Aleppo is the crisis of Washington losing its ISIL mercenaries to the Syrian army and Russian air force. The jihadists sent by Obama and the killer Hillary (“We came, we saw, he died”) to destroy Syria are being themselves destroyed. The Obama regime and the Western presstitutes are trying to save the jihadists by covering them in the blanket of “humanitarian crisis.”

We are in the middle of a presidential campaign in the US and no one has asked why the US is determined to overthrow a democratically elected Syrian government that is supported by the Syrian people.

No one has asked why the White House Fool is empowered to remove the president of Syria by siccing US-supplied jihadists, which the presstitutes misrepresent as “moderate rebels,” on the Syrian people.

Washington, of course, has no acceptable answer to the question, and that is why the question is not asked.

The answer to the question is that Washington’s strategy for destabilizing Iran and then the Muslim provinces of the Russian Federation, former Soviet central Asia, and the Muslim province of China is to replace stable governments with the chaos of jihadism. Iraq, Libya, and Syria had stable secular societies in which the government’s strong hand was used to prevent sectarian strife between Muslim sects. By overthrowing these secular governments and the current effort to overthrow Assad, Washington released the chaos of terrorism.

There was no terrorism in the Middle East until Washington brought it there with invasions, bombings, and torture.

Jihadists such as those that Washington used to overthrow Gaddafi appeared in Syria when the British Parliament and the Russian government blocked Obama’s planned invasion of Syria. As Washington was prevented from directly attacking Syria, Washington used mercenaries. The prostitutes that pretend to be an American media obliged Washington with the propaganda that the jihadist terrorists are Syrian democrats rebelling against “the Assad dictatorship.” This transparant and blatant lie has been repeated so many times that it now is confused with truth.

Syria has no connection whatsoever to Washington’s original justification for introducing violence into the Middle East. The original justification was 9/11 which was used to invade Afghanistan on the fabrication that the Taliban was shielding Osama bin Laden, the “mastermind,” who at the time was dying of renal failure in a Pakistani hospital. Osama bin Laden was a CIA asset who was used against the Soviets in Afghanistan. He was not the perpetrator of 9/11. And most certainly, neither were the Taliban.

But the Western presstitutes covered up for the Bush regime’s lie, and the public was deceived with the phrase that we must “defeat them abroad before they attack us at home.”

Of course, Muslims were not going to attack us at home. If Muslims are a threat, why does the US government keep bringing so many of them here as refugees from Washington’s wars against Muslims?

9/11 was the neoconservatives “new Pearl Harbor” that they wrote they needed in order to launch their wars in the Middle East. George W. Bush’s first Secretary of the Treasury said that the topic of Bush’s first cabinet meeting was the invasion of Iraq. This was prior to 9/11. In other words, Washington’s wars in the Middle East were planned prior to 9/11.

The neoconservatives are zionists. By reducing the Middle East to chaos they achieve both of their goals. They remove organized opposition to Israeli expansion, and they create jihadism that can be used to destabilize countries such as Russia, Iran, and China that are in the way of their exercise of unilateral power, which, they believe, the Soviet collapse bequeathed to the “indispensable nation,” the USA.

Osama bin Laden, the alleged 9/11 mastermind, was dying, not directing a terror war against the US from a cave in Afghanistan. The Taliban were focused on establishing their rule in Afghanistan, not on attacking the West. After blowing up weddings, funerals, and children’s soccer games, Washington moved on to Iraq. There was no sign of Iraqi belligerence toward the US. UN weapons inspectors said that there were no weapons of mass destruction in Iraq, but Washington did not hear. The whores who comprise the American media helped the Bush regime create the image of a nuclear mushroom cloud going up over America if the US did not invade Iraq.

Iraq had no nuclear weapons and everyone knew it, but facts were irrelevant. There was an agenda at work, an undeclared agenda. To advance its agenda that the government did not dare reveal, the government used fear. “We have to kill them over there before they kill us over here.”

So Iraq, a stable, progressive country was reduced to ruins. 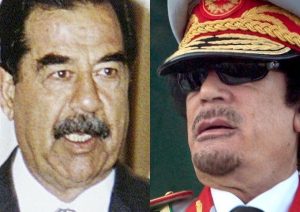 Libya was next. Gaddafi would not join Washington’s Africa Command. Moreover, China was developing the oil fields in eastern Libya. Washington was already troubled by Russia’s presence in the Mediterranean and did not want China there also. So Gaddafi had to go.

Next Assad was set up with faked evidence that he had used chemical weapons against the rebellion that Washington had started. No one believed the transparant Washington lie, not even the British Parliament. Unable to find support to cover an invasion, Killary the Psychopath sent the jihadists Washington used to destroy Libya to overthrow Assad.

The Russians, who until this point had been so naive and gullible as to trust Washington, finally figured out that the instability that Washington was brewing was directed at them. The Russian government decided that Syria was their red line and, at the request of the Syrian government, intervened against the Washington-supported jihadists. 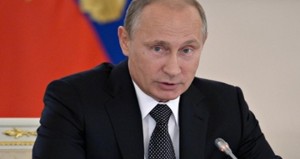 Washington is outraged and is now threatening to commit yet another criminal violation of the Nuremberg Standard with blatant aggression against Syria. Such an ill-advised step would bring Washington into military conflict with Russia and by implication with China. Before Europeans enable Washington to initiate such a dangerous conflict, they had best consider the warning from Sergey Karaganov, a member of the Russian Foreign Ministry’s Foreign Policy and Defense council: “Russia will never again fight on its own territory. If NATO initiates an encroachment against a nuclear power like ourselves, NATO will be punished.”

That the government of the United States is criminally insane should frighten every person on earth. Killary-Hillary is commited to conflict with Russia. Regardless, Obama, the presstitutes, and the Democratic and Republican establishments are doing everything in their power to put into the Oval Office the person who will maximize conflict with Russia.

The life of the planet is in the hands of the criminally insane. This is the real humanitarian crisis.

ER recommends other articles from www.paulcraigroberts.org

Lt. General Michael Flynn, director of the Pentagon’s Defense Intelligence Agency stated in an interview that the creation of ISIS was “a willful Washington decision.” See, for example:

The DIA warned that ISIS would result in a Salafist principality over parts of Iraq and Syria. http://www.judicialwatch.org/wp-content/uploads/2015/05/Pg.-291-Pgs.-287-293-JW-v-DOD-and-State-14-812-DOD-Release-2015-04-10-final-version11.pdf The warning went unheeded as the neoconservative Obama regime saw ISIS as a strategic asset to be used against Syria. 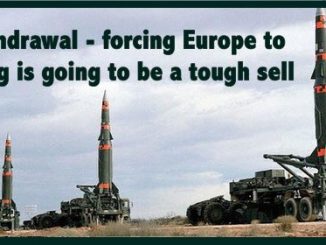 Europe and the Complex Post-INF Scenario 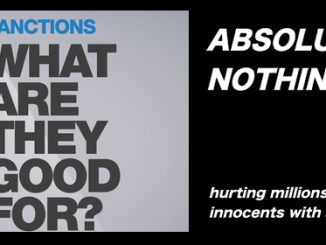 It’s Beyond Time to Call Economic Sanctions What They Are: War Crimes

The Hugely Important OPCW Scandal Keeps Unfolding. Here’s Why No One’s Talking About It