ER Editor: Here’s an English-language version on Youtube, with Putin speaking and a voice-over in English. Also, video and transcript (in English) here:

Vladimir Putin’s incredible speech of August 16, 2022: “I repeat that the era of the unipolar world order is doomed”

We have subtitled in French Vladimir Putin’s speech at the 10th Moscow Conference on International Security on August 16, 2022. During his speech, President Putin accused the West of diverting attention from its own citizens’ pressing socio-economic problems such as falling living standards, unemployment, poverty and deindustrialization.

The head of the Kremlin also reiterated his remarks concerning the unipolar world order wanted by the globalist elites, assuring that the latter will not take place:

“I repeat that the era of the unipolar world is becoming a thing of the past. . No matter how strongly the beneficiaries of the current globalist model cling to the situation, it is doomed to fail.”

Marcel D. explains to you in 4-4-2 who Vladimir Poutine really is! (French only, apologies)

Today, such an open discussion is particularly relevant. The world situation is changing dynamically and the outlines of a multipolar world order are emerging. A growing number of countries and peoples are choosing the path of free and sovereign development based on their distinct identity, traditions and values.

These objective processes are opposed by Western globalist elites, who cause chaos, stir up old and new conflicts and pursue the so-called policy of containment, which in effect amounts to the subversion of any alternative and sovereign option of development. Thus, they do everything they can to keep the hegemony and the power that escapes them; they attempt to keep countries and peoples in the grip of what is essentially a neo-colonial order.  Their hegemony means stagnation for the rest of the world and for all civilization; it means obscurantism, cultural cancellation and neoliberal totalitarianism.

They use all means. The United States and its vassals grossly interfere in the internal affairs of sovereign states by staging provocations, staging coups, or inciting civil wars. Through threats, blackmail and pressure, they try to force independent states to submit to their will and to follow rules that are foreign to them. This is done for one purpose, which is to preserve their dominance, the age-old model that allows them to parasitize all over the world as it has for centuries. But such a model can only work by force.

This is why the collective West – the so-called collective West – is deliberately undermining the European security system and forging new military alliances. NATO is crawling east and strengthening its military infrastructure. Among other things, it deploys missile defense systems and strengthens the strike capabilities of its offensive forces. This is hypocritically attributed to the need to strengthen security in Europe, but in fact the opposite is happening. Moreover, the proposals on mutual security measures, which Russia presented last December, have once again been ignored.

They need conflict to maintain their hegemony. It is for this reason that they have destined the Ukrainian people to serve as cannon fodder. They implemented the anti-Russia project and were complicit in spreading neo-Nazi ideology. They turned a blind eye when the people of Donbass were killed by the thousands and continued to dump weapons, including heavy weapons, for use by the Kiev regime, which they persist in doing now.

In these circumstances, we have taken the decision to carry out a special military operation in Ukraine, a decision which is fully in accordance with the Charter of the United Nations. It has been made clear that the objectives of this operation are to ensure the security of Russia and its citizens and to protect the inhabitants of Donbass against genocide.

The situation in Ukraine shows that the United States is trying to drag out this conflict. It acts similarly elsewhere, fomenting the potential for conflict in Asia, Africa and Latin America. As you know, recently the United States again deliberately tried to fan the flames and stir up trouble in the Asia-Pacific. We view this as a carefully planned provocation.

It is clear that by taking these measures, the Western globalist elites are trying, among other things, to divert the attention of their own citizens from pressing socio-economic problems, such as falling living standards, unemployment, poverty and deindustrialization. They want to blame their own failures on other countries, namely Russia and China, which defend their point of view and design a sovereign development policy without submitting to the dictates of supranational elites.

We also see the West trying to extend its bloc-based system to the Asia-Pacific region, as it did with NATO in Europe. To this end, they create aggressive military-political unions such as AUKUS and others.

It is obvious that it is only possible to reduce tensions in the world, to overcome military-political threats and risks, to improve confidence between countries and to ensure their sustainable development through a radical strengthening of the contemporary system of a multipolar world.

I repeat that the era of the unipolar world is becoming a thing of the past. No matter how strongly the beneficiaries of the current globalist model cling to the situation, it is doomed to fail. Historical geopolitical shifts are going in a totally different direction.

And, of course, your conference is another important proof of the objective processes forming a multipolar world, bringing together representatives of many countries who wish to discuss security issues on an equal footing and conduct a dialogue that takes into account the interests of all the parties, without exception.

I would like to emphasize that the multipolar world, based on international law and fairer relations, opens up new opportunities to counter common threats, such as regional conflicts and the proliferation of weapons of mass destruction, terrorism and cybercrime.  All these challenges are global and therefore it would be impossible to overcome them without combining the efforts and potentials of all States.

As before, Russia will actively and resolutely participate in these coordinated joint efforts, together with our allies, partners and associates, to improve the existing mechanisms of international security. It will create new ones and systematically strengthen the national armed forces and other security structures by providing them with advanced weapons and military equipment. Russia will ensure its national interests, as well as the protection of its allies, and take other steps towards building a more democratic world where the rights of all peoples and cultural and civilizational diversity are guaranteed.

We must restore respect for international law, its fundamental norms and principles. And, of course, it is important to promote universal and commonly recognized agencies like the UN and other platforms for international dialogue. The UN Security Council and the General Assembly, as originally envisioned, are meant to serve as effective tools to reduce international tensions and prevent conflict, as well as to facilitate the provision of security and good – be reliable to countries and peoples.

In conclusion, I would like to thank the conference organizers for their important preparatory work and wish all participants in-depth discussions.

I am sure that the forum will continue to make a significant contribution to strengthening peace and stability on our planet and will facilitate the development of constructive dialogue and partnership.

Thank you for your attention.

French Translation by The Media in 4-4-2 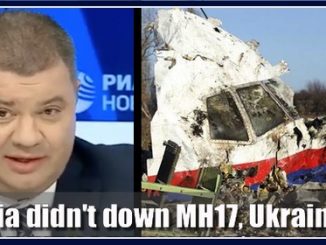