The twisted logic of those who wrap apartheid Israel in cotton wool while attacking our democratic, constitutional right to free speech continues …

The campaign for Boycotts, Divestment and Sanctions (BDS) is a movement that got going around 2006 in an effort to mobilize a ‘global citizen response’ to Israel’s continued violation of Palestinian rights under international law.  According to the BDS site,

Despite abundant condemnation of Israeli policies by the UN, other international bodies, and preeminent human rights organisations, the world community has failed to hold Israel accountable and enforce compliance with basic principles of law. Israel’s crimes have continued with impunity.

But any call for boycotting Israeli goods and companies or showing support in any way for this has been an increasing target of hypocritical government responses, especially in the wake of the Charlie Hebdo attacks in Paris in January, 2015. It’s acceptable to allow – indeed, publicly celebrate, as the leaders of over 40 countries did in the middle of Paris the Sunday following the attacks – the free speech of the Charlie Hebdo team, which published offensive cartoons against all religions but gave special preference to Muslims, and then turn around and criminalise activists and advocacy groups on the grounds of racism for using a legitimate mechanism to protest against Israel’s inhumane and, under international law, criminal treatment of the Palestinians.  You can be forgiven for losing the plotline here.

According to Glenn Greenwald and Andrew Fishman, the BDS movement is modelled on the 1980s campaign that brought down the apartheid regime in South Africa, a regime allied with Israel, in fact. The very sign of its success may well be the reaction of various governments against it, a reaction which is making criminals out of citizens with a conscience and a right to voice their opinion. 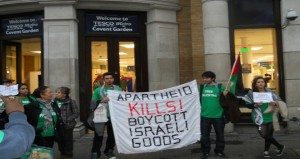 And a freedom of speech defence will not protect you. In France, for example, if you wear pro-BDS T-shirts or hand out flyers advocating the boycotting of Israel and its goods outside supermarkets, this is deemed to fall into the category of “provok[ing] discrimination, hatred or violence toward a person or group of people on grounds of their origin, their belonging or their not belonging to an ethnic group, a nation, a race or a certain religion.”

Such actions will get you hauled up before a magistrate, and given a fine and a conviction as they did with a group of French activists back in 2010. An appeal made on freedom of speech grounds recently failed.

In the US, growing suppression of Palestinian rights advocacy is being noted. A report by the Center for Constitutional Rights notes how professors and students are being targeted across many campuses by Israel advocacy organizations, universities, governments and other agencies, whose tactics include ‘event cancellations, baseless legal complaints, administrative disciplinary actions, firings, and false and inflammatory accusations of terrorism and antisemitism’. They note, ‘[t]his trend has significant implications for both the First Amendment and democratic principles like academic freedom, not to mention the mission of higher education to help develop critical thinking.’

The UK under David Cameron has seen a similar crackdown on democratic expression. Publicly-funded institutions such as universities and municipal councils will lose their funding if they engage in these boycotts, for the lame reason according to a report in the Independent that they would “undermine[ ] good community relations, poison[ ] and polarise[ ] debate and fuel[ ] anti-Semitism”.

And in 2011, an Israeli law shut down such expression on its own territory, allowing anyone calling for a boycott to be automatically sued by the companies targeted and rendered unable to bid for public tenders.

Now it’s New York’s turn. Its governor, Andrew Cuomo (D), in an attack on citizens’ First Amendment rights to free speech, is in the process of having companies and organizations who support the BDS boycott blacklisted, the onus being on them to prove otherwise. And Cuomo is by no means alone on the US political landscape for his hypocritical preferences.

Enjoy Greenwald’s and Fishman’s illuminating and thoughtful report on the matter.

By Glenn Greenwald and Andrew Fishman

One of the greatest free speech threats in the west is the growing, multi-nation campaign literally to outlaw advocacy of boycotting Israel. People get arrested in Paris – the site of the 2015 “free speech” (for Muslim critics) rally – for wearing pro-boycott t-shirts. Pro-boycott students on U.S. campuses – where the 1980s boycott of apartheid South Africa flourished – are routinely sanctioned for violating anti-discrimination policies. Canadian officials have threatened to criminally prosecute boycott advocates. British government bodies have legally barred certain types of advocacy. Israel itself has outright criminalized advocacy of such boycotts. Notably, all of this has been undertaken with barely a peep from those who styled themselves free speech crusaders when it came time to defend anti-Muslim cartoons.

But now, New York’s Democratic Governor Andrew Cuomo (above, in 2016 Celebrate Israel Parade) has significantly escalated this free speech attack on U.S. soil, aimed at U.S. citizens. The prince of the New York political dynasty yesterday issued an executive order directing all agencies under his control to terminate any and all business with companies or organizations that support a boycott of Israel. It ensures that citizens who hold and express a particular view are punished through the denial of benefits which other citizens enjoy: a classic free speech violation (imagine if Cuomo issued an order stating that “anyone who expresses conservative viewpoints shall have all state benefits immediately terminated”).

Even more disturbing, Cuomo’s Executive Order requires that one of his Commissioners compile “a list of institutions and companies” which – “either directly or through a parent or subsidiary” – support a boycott. That government list is then posted publicly, and the burden falls on them to prove to the state that they do not, in fact, support such a boycott. Donna Lieberman, Executive Director of the New York Civil Liberties Union, told The Intercept: “Whenever the government creates a blacklist based on political views it raises serious First Amendment concerns and this is no exception.” Reason‘s Robby Soave denounced it today as “brazenly autocratic.”

To read the relevant provisions of Cuomo’s order is to confront the mentality of petty censoring tyranny, flavored with McCarthyite public shaming, in its purest form. See for yourself: 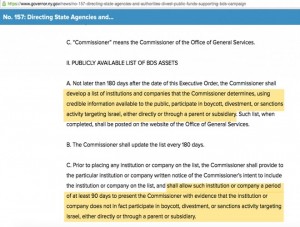 Making matters worse still is the imperious nature of Cuomo’s order. As Salon‘s Ben Norton noted, “the New York legislature has unsuccessfully tried to push through anti-boycott legislation for months.” So instead, Cuomo just unilaterally decreed this punishment of boycott advocates.

New York’s Democratic Senator Chuck Schumer wasted no time, now demanding a federal statute that tracks Cuomo’s order. Hillary Clinton, last July, wrote a public letter to her (and the Democratic Party’s) billionaire supporter, self-described Israel fanatic Haim Saban, endorsing the core principle of this censorship effort: that boycotting Israel is a form of anti-semitism, and did so again in her March speech before AIPAC. Numerous Republicans support similar measures.

Beyond the McCarthyism and profound free speech threat, the stench of hypocrisy of Cuomo and Democrats is suffocating. Just over two months ago, Cuomo banned state officials from traveling to North Carolina in order to support the boycott against that American state in protest over its anti-transgender law. That executive order began by proclaiming that “New York state is a national leader in protecting the civil rights and liberties of all of its citizens” and thus barred “publicly funded travel” to North Carolina. 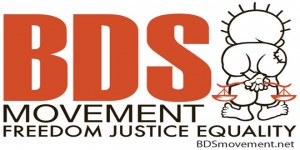 More ironic still is that Cuomo, in imposing a boycott of North Carolina, said he was doing so because in “a free society the equal rights of all citizens . . . must be protected and cherished” – exactly the principle which the boycott of Israel is seeking to fulfill by ending oppression and discrimination against Palestinians. But even if you disagree with the Israel boycott itself, no rational person should want Andrew Cuomo and other elected officials to have the power to dictate which political views are acceptable and which ones result in denial of state benefits.

The free speech hypocrisy on the part of all sorts of people here is obvious. In 2012, conservatives were furious when Chicago Mayor Rahm Emanuel announced that he would block the restaurant chain Chick-fil-A from expanding in the city as punishment for its owners anti-gay activism, depicting this move as a grave threat to free speech (a position we shared). Throughout 2015, pundits such as New York‘s Jonathan Chait wrapped themselves in the free speech flag when it came time to defend racist and anti-gay speech on campus, insisting that all forms of speech, even “hate speech,” should be protected (positions we also share).

Yet now, a systematic, international campaign – fully bipartisan in the U.S. – is being implemented to abuse state resources and the force of law for a full-frontal assault on free speech and free assembly rights, and virtually none of them is objecting because it’s all in service of protecting Israel from criticism. It’s bizarre enough that someone gets elected as Governor of New York and then believes it’s part of his job to shield Israel from criticism. That he does so by assaulting the free speech rights of citizens of his own country – just weeks after imposing a boycott on another American state – tells you all you need to know about the role Israel continues to play in American discourse and the willingness of people to stomp on free speech principles the moment doing so benefits their political goals.

ER recommends other articles by the Intercept

Please see link to BDS site in the preface above

Glenn Greenwald is one of three co-founding editors of The Intercept. He is a journalist, constitutional lawyer, and author of four New York Times best-selling books on politics and law. His most recent book, No Place to Hide, is about the U.S. surveillance state and his experiences reporting on the Snowden documents around the world.

Andrew Fishman is a journalist and researcher. Before joining The Intercept, he was a freelance journalist and multimedia producer. His work has appeared on NPR, Al Jazeera English, Bloomberg TV, and other outlets. He lives in Rio de Janeiro, Brazil. 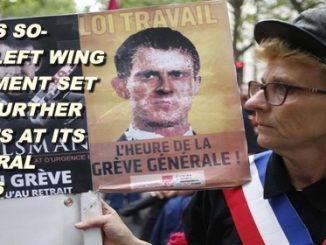 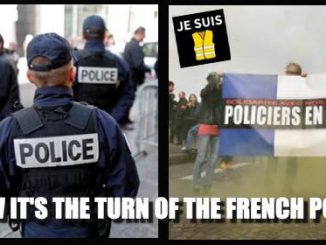