For the third time in a row, the Catalan pro-independence movement has won with an absolute majority in the Catalan elections. It has won resoundingly with 74 seats, more than the 68 that establishes the majority (in the previous elections it had won with 70). This time also with 51.22% of the votes, making it the majority among the voters.

The elections were due next year, but they were brought forward because the Spanish courts overthrew Catalan President Joaquim Torra (pictured) for having disobeyed an electoral board that ordered him to take down a banner criticising the imprisonment of Catalan 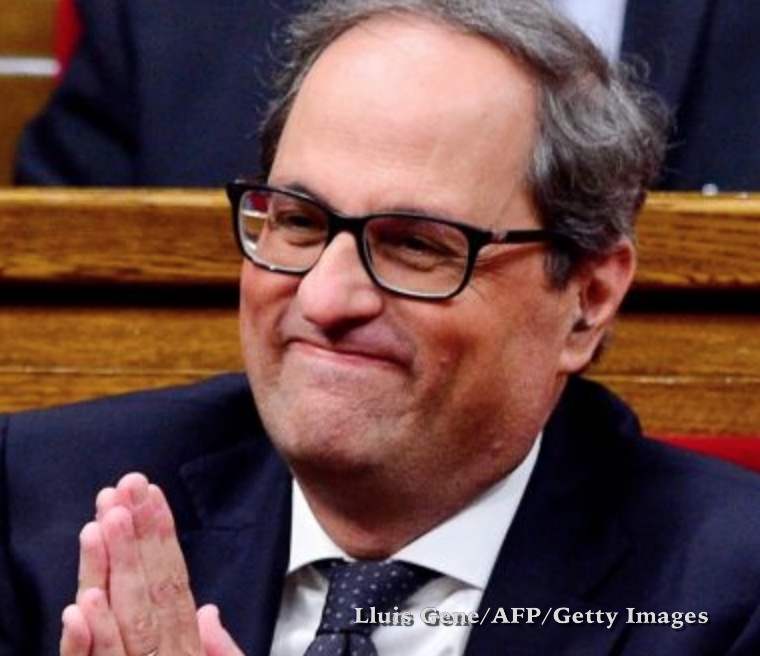 politicians. The President refused, citing freedom of expression, and the Spanish judiciary considered that the contempt was sufficient to force the removal of the President of the Parliament of Catalonia and cause the elections to be brought forward.

Furthermore, after consulting experts on the pandemic, the provisional Catalan executive decided to postpone the elections for five months until the third wave of Covid-19 had subsided. However, yet again, the Spanish judiciary interfered forcing the elections to be held on 14th February.

This is the same Spanish Justice that keeps 9 Catalan politicians and activists in prison, that has issued search and arrest warrants against 7 exiled Catalan politicians (which the German and Belgian courts rejected because they did not see the accusations as justified or because they understood that there were no guarantees of a fair trial in Spain). It is the same Spanish Justice that maintains the search and arrest warrant against a Majorcan musician –exiled in Belgium– for singing against the King of Spain and that is imminently going to imprison another Catalan musician, Pablo Hasel, for also having sung against the King.

In this context, and despite having the entire state apparatus and the Spanish press against them, independence has won again, and has done so obtaining a larger absolute majority than ever and with over 51% of the votes. In front of the pro-independence movement, we have the former Spanish socialist health minister during the pandemic, who has had the full support of the state, the press and unionism in general, and also the Spanish extreme-right of VOX, which has burst into the Catalan Parliament with 11 seats.

Given this scenario, the Spanish state and the European Union cannot deny the right of self-determination of Catalan society, which must be expressed in a referendum with democratic guarantees, transparency and without foul play.

All in all, democracy is about allowing citizens to decide at the ballot box, not about violating their will with the application of laws that should, in fact, serve to guarantee there is a framework that respects what societies want for themselves.

Jordi Oriola i Folch is an award-winning documentary filmmaker and founder of Transforma Films. His work has been broadcast on television stations around the world and touches on issues of human rights, sustainability, democratic participation and community work, historical memory and the economic crisis. He has also taught audiovisual classes in the Basque Country, Catalonia, South America and Africa. He can be reached through his website or twitter.

NHS Consultant Says Staff Are Being Silenced Over COVID19

6 Factors Which Point to a Rigged Election, Evidence in Plain Sight