ER Editor: We remind readers of UN rapporteur Philip Alston’s memorable report on poverty in the UK from November 2018 – UK austerity has inflicted ‘great misery’ on citizens, UN rapporteur says. This report found the UK government’s austerity policies to effectively make poverty a political choice which violates rights of several groups (women, children, disabled, etc.) under the UN Charter. 14 million people, by his estimate, were living in poverty then – now with five million in ‘deep poverty’ according to a new report by the Social Metrics Commission.

At such a juncture, one can only rhetorically ask while madly face palming oneself …

Where are the feminists?

Where is the Left, and the Unions?

Where is the EU?

Why are our countries deliberately pursuing massive immigration when we can’t support a large segment of the existing population?

A study by the Social Metrics Commission (SMC) finds that more than 4 million people in the UK are mired in “deep poverty,” with an income at least 50 percent below the official poverty line. Many families in this bracket struggle to pay for the most basic essentials.

Led by a Conservative peer, the SMC includes representatives from charities and think tanks including the Joseph Rowntree Foundation, the Office of the Children’s Commissioner and the Institute for Fiscal Studies. It was established in 2016 to develop a new way of measuring poverty.

As well as measuring the incidence of poverty, the SMC developed a broader measurement framework that provides a deeper understanding of the factors that affect the experience of poverty, influence the future likelihood of poverty, or are consequences that flow from being in poverty.

An army of 14.3 million people are in poverty and a third (4.5 million) are in deep poverty and living on the breadline. They account for fully 7 percent of the population. For a couple with two children, deep poverty means a combined income of less than £211 a week, after housing costs. A single parent with one child in poverty lives on less than £101.50 per week.

Research from other sources shows that destitution as a result of benefit cuts and high rents was experienced by an estimated 1.5 million people in the UK. Destitution is defined as an income for a couple with two children of just £140 a week.

General levels of poverty have changed relatively little since 2000-2001. However, there are certain groups that have seen hardship levels rise since 2013—reversing what for a period had been a slight downward trend—with pensioners, and children of lone parents facing the consequences of austerity measures such as the implementation of the Tories benefit freeze.

Since 2013-14, there has been a 9 percent increase in child poverty in families with three or more children—in large part due to the benefit freeze imposed on larger families. This figure does not include the impact on families who are affected by the two-child benefit limit introduced in 2017. The limit restricts the “child element” in Universal Credit and tax credits, worth £2,780 per child per year to only the first two children.

The SMC confirms the impact of disability on levels of poverty, with 6.8 million people living in a household that includes someone who is disabled.

The working poor are a growing social phenomenon internationally. Millions in Britain are struggling to get by, despite having regular employment. The report notes that at the millennium, 54 percent of children living in poverty were also part of a family where an adult worked. This figure shot up to nearly three-quarters (73 percent) in 2017-18.

Overall rates of poverty have changed little over the last two decades. Whatever government has been in power, with Labour and then Tory-led governments adopting the same pro-capitalist (ER: we must modify that to read ‘pro-corporatist’) and then austerity policies, the poverty rate has remained at between 21 percent and 25 percent.

The current rate is 22 percent, the same as last year and marginally lower than 24 percent in 2000/01. This was the first year including results using the SMC’s approach.

Despite this, the SMC’s findings were reported in the Guardian as if the austerity policies over the last decade “undermined two decades of anti-poverty policy.” It cited Alison Garnham, the chief executive of Child Poverty Action Group (CPAG), saying, “By cutting £40bn a year from our work and pensions budget through cuts and freezes to tax credits and benefits, the government has put progress into reverse.” 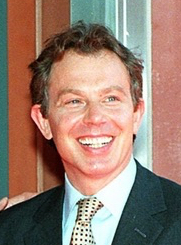 To be blunt, the average poverty-stricken worker in the UK would be astonished to learn from the Guardian and CPAG that any governments had been operating on the basis of “anti-poverty policies” since 1999. Tony Blair’s Labour government that came to power in 1997 operated according to the mantra of his adviser, Peter Mandelson, who declared he was “intensely relaxed about people getting filthy rich.”

There was nothing remotely progressive about Labour’s tax credit and benefits policies, which were introduced primarily to serve as a subsidy to big business. Two years after taking power, New Labour rolled out to great fanfare a national minimum wage, while ensuring it was set at rock bottom to satisfy the corporations. An 18- to 21-year-old was on a minimum of £3.00 an hour and those 22 years and over could be paid little as £3.60.

Big business was exempted by Labour from paying those aged 16 to 17 any minimum wage at all until 2003, when they could finally earn a minimum princely sum of £3.00 an hour. The minimum wage in Britain remains such a pittance that, after 20 years, it only rose above £8 this year and an apprentice can still be legally paid a miserly £3.90 an hour. 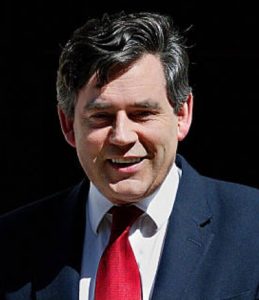 In 2003, Labour Chancellor Gordon Brown (pictured) introduced means-tested Child Tax Credit, Disabled Person’s Tax Credit and Working Tax Credit. These saw a meagre rise in the income of the poorest families. But the purpose was threefold: to drive people off benefits, reduce the benefits bill, and force workers to accept low paying jobs.

The tax credits were a boon to the giant corporations and medium and small businesses that pay poverty level wages. The Conservative-Liberal Democrat government continued this policy, increasing tax credits in 2010.

Over this entire period, the trade unions refused to lift a finger in opposition to poverty wages and austerity. This prepared the way for the 2015 Cameron Conservative government to slash both benefits and tax credits in order to further impoverish millions and boost corporate profits. Having established low pay as the norm, the Tories calculated that workers would have no choice but to take whatever job was offered them—especially following the 2008 financial crash and faced with the decimation of welfare benefits.