UK Labour is in the throes of a makeover as the new leader of the opposition taps a notorious Israeli Unit 8200 alumnus to lead its social media in the push for a 2024 victory.

Jeremy Corbyn’s successor as the UK’s opposition party leader (LOTO), Keir Starmer, has stated unequivocally that the embattled former head of the opposition will not return as a Labour MP, despite being reinstated as a member of the Party following his controversial ouster, which was driven by what many have called a concerted smear campaign branding him an anti-Semite and thwarting his bid to become Prime Minister.

After winning 52% of the vote, Starmer is now poised to jettison any perceptions of an anti-Jewish Labour Party and restore “trust” with the UK’s Jewish community, which exited the Party en masse during Corbyn’s tenure. A self-declared Zionist, the new LOTO is already facing criticism for quickly abandoning one of the central tenets of his campaign, but is standing firm on the matter of committing the Party to Israel.

Starmer’s links to the apartheid state are well-known and his successful run was bankrolled by prominent Israeli lobbyist Trevor Chinn, who also funded three other Labour MPs that played a key role in the promotion of the campaign against Corbyn and paved the way for Starmer’s rise to the Party leadership. Described as a man who “ascended to the front bench almost as soon as he entered parliament,” Starmer’s relative obscurity seems at odds with the historic moment this Labour party seems to be entering as calls for radical reform to the UK’s constitution are becoming louder in the wake of the recently unveiled Brexit deal.

Given Starmer’s “laser focus” on securing 10 Downing Street for Labour in 2024 and the critical messaging such a goal will require as Britain moves out of the EU, it is also noteworthy that Starmer’s office has hired a ‘former’ Israeli spy and Unit 8200 alumnus, Assaf Kaplan to oversee the Party’s social media operation. As reported by Asa Winstanley for The Electronic Intifada, Kaplan joined the UK’s opposition’s head office soon after Starmer’s election in December 2020.

Kaplan’s official title is Social Listening and Organizing Manager and, as such, is tasked with profiling target audiences. In this capacity, he will be honing in on who the opposition party’s audience is, how they feel about the party and what they want. While social listening, itself, is a new trend in brand marketing, its principles have deep roots in the Israeli military’s Unit 8200, where Kaplan served from 2009 to 2015.

Known as an incubator for numerous Israeli cybersecurity and digital surveillance startups that go on to join the private sector to provide related services to target dissidents around the world, like the infamous NSO Group and Black Cube, Unit 8200’s reputation for using state-of-the-art spying technology to repress, surveil and assassinate Palestinians follows anyone associated with the shadowy IDF spinoff factory.

The Unit’s murderous practices against the Palestinian people was exposed by a former member in 2014, who described the horrific lengths to which the Israeli state goes to make life a living hell for Palestinians through covert information gathering used to murder women and children in Gaza under the guise of fighting terrorism. “A significant part of our objectives are innocent people, not at all connected to any military activity,” writes the IDF whistleblower, revealing that he would often seek information about targets’ “difficult financial situation, sexual preferences, a person’s chronic illness or that of a relative, and necessary medical treatment”, which would be used to serve the “agendas of certain politicians.”

This kind of experience is sure to come in handy for Kaplan in his post at Labour Party headquarters, whose background includes knowledge of “digital monitoring platforms” and “human analysis” relating to Israeli elections. Together with his new boss’s recent history of using social media to execute a purge of purported “anti-Semitic” elements within the party, Kaplan should fit right in.

Beginning with Jeremy Corbyn, a life-long advocate for Palestinian rights who was banished from the center-left party for vacillating on the adoption of the International Holocaust Remembrance Alliance (IHRA) definition of anti-Semitism in Labour’s code of conduct, the campaign to root out pro-Palestinian voices within the party counted with the active participation of Keir Starmer.

Together with other party officials, Starmer played a leading role in the purging of eleven Labour party members, who had been tagged as anti-Semitic by an influential Jewish organization called Board of Deputies of British Jews or BoD, whose one-time president – Lord Rothschild – had a certain letter addressed to him from the King of England, which came to be known as the Balfour Declaration and led directly to the creation of Israel.

Starmer and company used the tweets of Rebecca Massey, a leading pro-Corbyn activist, to expel her from the party. The BoD had called attention to her social media posts and relayed their concerns that these “demonized Israel” and bordered on anti-Semitism. Denials by Starmer that he played any role in her expulsion and that of ten others at the behest of the BoD, were nonetheless disproved by confidential documents released in May 2020, that showed Starmer had met with the Jewish Labour Movement – a BoD affiliate – the day of Massey’s expulsion pursuant to a recommendation to expel her and ten others, which did occur later that evening.

The UK is entering a pivotal time in its history as the pandemic crisis meets head on with the implementation of a Brexit deal, that is still opposed by a large segment of the population. Add to this the prospect of 3 million immigrants from Hong Kong rushing to take advantage of Boris Johnson’s British National Overseas (BNO) visa program as China declares it will not recognize the special passports, and you have a recipe for high drama in the coming months and years for the UK.

Perhaps an ideal scenario for those intent on remaking the British constitution, which is mostly coming from the centrists within the party and all those who would like to see all “the good stuff from the discredited EU and its institutions”, while leaving behind all “the rubbish.” What exactly the ‘good stuff’ is and what it is not, remains to be decided

What is clear is that the UK Labour Party has no intention of letting this ‘crisis go to waste’ and by bringing in an Israeli mercenary spy to take control of the all-important dimension of social media, which played a significant role in Brexit’s victory, Starmer is signaling Labour’s commitment to sacrifice human rights in Palestine for a shot at 2024. 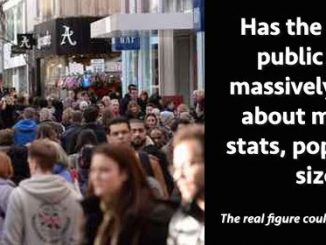 Number of Women in U.K. Losing Baby as a Result of COVID Vaccine Doubles in Just 7 Days – MHRA Data