Hedge fund billionaire George Soros is used to having his way. But the megalomaniacal currency speculator and political manipulator bet on the wrong horse in the Trump vs. Clinton race, and even all the millions of dollars he spent trying to rig the outcome failed, in the end. It must be hard for the 86-year-old globalist to face up to the fact that the world is not his oyster and his admitted “fantasies about being God” are just that — fantasies, albeit far from harmless ones. (The BlackLivesMatter riots and the anti-Trump riots he helped finance look more like the work of Lucifer than God, in this reporter’s humble opinion.) 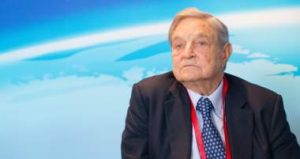 However, Soros refuses to accept that he lost and Trump won. So he is committing a sizable portion of his enormous wealth, along with his outsized political and media influence, to crippling and delegitimizing the incoming Trump administration, with more riots, protests, and media hit pieces. Within hours after Trump had been officially named the victor, the Soros-funded rent-a-mobs were causing mayhem in streets all across America. And while that havoc was still playing out, Soros convened a closed confab of fellow globalist billionaires at a Washington D.C. luxury hotel to plan their anti-Trump counterattack. They call their plutocrat club the Democracy Alliance, an especially hypocritical label since they lavishly fund individuals and organizations that are working to undermine our constitutional republic (which they erroneously call a democracy).

And just two weeks after Election Day, on November 22, Soros’s Open Society Foundations announced a “$10 Million Initiative to Confront Hate.” This new money spigot will expedite funding to organizations combatting the “harsh rhetoric and policy proposals” of Donald Trump “during the 2016 presidential campaign that drew on racist, sexist, anti-immigrant, anti-Muslim, anti-Semitic, anti-LGBTI, and other forms of hate.” Which means, of course, that there will be ample funding for the “anti-hate” protesters who will be demonstrating (and likely rioting) on Inauguration Day, while spewing obscene and hateful remarks, burning Trump in effigy and carrying facsimilies of his head around on pikes (as they did in the November melees).

The latest hit piece by Soros personally is a column he penned for Project Syndicate, which has been carried by hundreds of newspapers, news services, and websites worldwide, and in which he calls Donald Trump “a con artist and would-be dictator.” The December 28 column, entitled “Open Society Needs Defending,” begins with a lengthy lead-in subtitle: “Open societies are in crisis, and various forms of closed societies — from fascist dictatorships to mafia states — are on the rise. Because elected leaders failed to meet voters’ legitimate expectations and aspirations, electorates have become disenchanted with the prevailing versions of democracy and capitalism.”

I am an 86-year-old Hungarian Jew who became a US citizen after the end of World War II. I learned at an early age how important it is what kind of political regime prevails. The formative experience of my life was the occupation of Hungary by Hitler’s Germany in 1944. I probably would have perished had my father not understood the gravity of the situation. He arranged false identities for his family and for many other Jews; with his help, most survived.

However, Soros neglects to mention some very important facts in his biographical reflection, such as that he helped Hitler and the Nazis confiscate the wealth and belongings of his fellow Jews. What’s more, he feels no guilt, regret, or remorse about being a Holocaust helper, because, as he put it, if he hadn’t done it “somebody else would be taking it away anyhow.” However, he undoubtedly regrets being so candid about all of this during an interview with the CBS 60 Minutes program back in 1998. He must have realized afterward how ghoulishly cold-blooded and inhuman his words and demeanor appeared, and how violently that clashed with the philanthropic humanitarian image he was crafting for himself. For some reason, the CBS video of the program disappeared, and that disappearance has been the subject of much speculation concerning possible legal threats and/or financial inducements by Soros to keep the damning footage buried. The recent mysterious resurfacing of the 60 Minutes interview has likewise been the subject of much speculation. In addition to the recently released WikiLeaks files on Soros, which are decidedly less flattering than the canned biography of the mogul on Wikipedia, the CBS video allows Soros to demolish his own carefully invented saintly image with his own words. For the past couple of months, the long-lost 60 Minutes interview with Soros has been popping up on YouTube and various websites, only to be taken down due to CBS copyright challenges. But, like a Whack-a-Mole, it keeps popping up on new sites as fast as Soros and CBS can whack it down. The long-suppressed interview of an unrepentant Soros admitting he was a Holocaust helper further demolishes his credibility to pose — in his words — as the “conscience of the world.”

During the 60 Minutes program CBS interviewer Steve Kroft asks Soros (born Gyorgy Schwartz) about his boyhood in Hungary during the Nazi occupation. Kroft rolls vintage footage of long lines of Hungarian Jews — men, women, children — being loaded onto trains. Here is a partial transcript of the interview (emphasis added):

KROFT: (Voiceover) These are pictures from 1944 of what happened to George Soros’ friends and neighbors.

KROFT: (Voiceover) …who escaped the Holocaust…

KROFT: (Voiceover) … by — by posing as a Christian.

KROFT: (Voiceover) And you watched lots of people get shipped off to the death camps.

Mr. SOROS: Right. I was 14 years old. And I would say that that’s when my character was made.

KROFT: In what way?

Mr. SOROS: That one should think ahead. One should understand and — and anticipate events and when — when one is threatened. It was a tremendous threat of evil. I mean, it was a — a very personal experience of evil.

KROFT: My understanding is that you went out with this protector of yours who swore that you were his adopted godson.

KROFT: Went out, in fact, and helped in the confiscation of property from the Jews.

KROFT: I mean, that’s — that sounds like an experience that would send lots of people to the psychiatric couch for many, many years. Was it difficult?

Mr. SOROS: Not — not at all. Not at all. Maybe as a child you don’t — you don’t see the connection. But it wasit created no — no problem at all.

KROFT: No feeling of guilt?

KROFT: For example that, ‘I’m Jewish and here I am, watching these people go. I could just as easily be there. I should be there.’ None of that?

Mr. SOROS: Well, of course I c — I could be on the other side or I could be the one from whom the thing is being taken away. But there was no sense that I shouldn’t be there, because that was — well, actually, in a funny way, it’s just like in markets — that if I weren’t there — of course, I wasn’t doing it, but somebody else would — would — would be taking it away anyhow. And it was the — whether I was there or not, I was only a spectator, the property was being taken away. So the — I had no role in taking away that property. So I had no sense of guilt.

No sense of guilt then and none now. Neither does this Nazi collaborator suffer from any sense of guilt over smearing opponents with false charges of fascism or neo-Naziism, or funding groups that do the same. Nor does he suffer any qualms of conscience over crashing whole national economies and national currencies (Malaysia, Thailand, Britian), causing untold devastation and suffering for millions of people. Besides, a few million dollars in grants to activist NGOs and media groups usually suffices to repair any of the PR damage done by his predatory practices.

Most likely, it is his Deity Complex that prevents him from ever experiencing feelings of guilt. After all, if one is “God” what is there to feel guilty about? But mortals who think they’re divine invariably suffer in other ways. “Next to my fantasies about being God, I also have very strong fantasies of being mad,” Soros once admitted to a British television audience. “In fact, my grandfather was actually paranoid. I have a lot of madness in my family. So far I have escaped it.” Has he really escaped it? Many would disagree; his madness seems quite apparent. In addition to his most recent rant against Trump, he has turned Project Syndicate — his own media platform — into a non-stop free-fire zone aimed at the president-elect by leftwing “public intellectuals” such as Carl Bildt, Jorge Castaneda, Barry Eichengreem, Richard Haass, Joschka Fischer, Brad DeLong, Peter Singer, Javier Solana, and dozens of others.

The 60 Minutes interview is well worth tracking down and well worth watching (before it gets permanently deep-sixed down the memory hole). Together with everything else that has come out on Soros in the intervening years, it provides more than enough evidence to banish the megalomaniacal mogul from all civil society and provide him with a padded cell where he can contemplate and celebrate his divinity without wreaking havoc on all mankind.

Soros’ Dream: To Turn China Into A Neoliberal Grabitization Opportunity