ER Editor: How surreal can things get? ‘Macron’ (like ‘Biden’) has prepared the ground through a speech televised by MSM for sending French troops to Ukraine. Where Ukrainian soldiers have been dying in hundreds by the DAY (see Scott Ritter‘s recent comment about the casualty rate for both sides around the 13th minute or this from Moon of Alabama), where the outcome has been a foregone conclusion since the beginning, and where even Western elites have privately admitted defeat. Apparently, the only relevant question now is which existing power gets which bit of Ukrainian territory. See

Will the Ukraine Be Partitioned Next And If So, How?

When will this movie end?

Here’s what some awake and aware French think.

“War thunders at our doors”: President Macron calls on the French to sacrifice themselves for the globalist elites

Emmanuel Macron denounced Russia’s “brutal attack” in Ukraine and called on the French to “accept paying the price of freedom.” “I am thinking of our people, who will need the strength of soul to face the coming times, to resist uncertainties, sometimes to ease and adversity and, united, to agree to pay the price for our freedom and of our values.” “We all have to be prepared for (the war) to last. Summer and the beginning of autumn will undoubtedly be very harsh.” (ER: Macron had already used the ‘we’re at war’ metaphor over Covid way back in July 2021. Look where that went.)

Macron is simply asking the French to pay the price for his incompetence and madness. He’s asking them to sacrifice themselves for the elites. Indeed, the latter wish — at all costs — to lead the new world order. A wish clearly announced by Joe Biden on March 21, 2022 in the face of the largest American companies, including General Motors, Apple, Amazon, JP Morgan, Bank of America, Boeing, FedEx, Exxon Mobil, Johnson & Johnson… And all the risks will be taken by Washington! Even if it means blowing up the Zaporijia nuclear power plant, which will only be one more Hiroshima or Nagasaki.

The vassal Macron carries out all directives ordered by Biden. Our President’s file found at Donald Trump’s must be well filled out to entice him to crawl that low and sacrifice his own people. …

This Friday, August 19, during a speech delivered in Bormes-les-Mimosas, you asked the French, with regard to the conflict in Ukraine, “to agree to pay the price of freedom”. Behind this request lies, without a doubt, all the financial, economic and social difficulties which will, in the coming months, be added to those which our compatriots are already experiencing.

The French, for several decades, have continued to pay for the errors, inconsistencies and lack of foresight that you and your predecessors have established as a rule of conduct. They are tired of having to pay out of pocket, but also of their freedoms, the haphazard and short-sighted policies that you keep proposing to them without ever really improving their situation, or that of the world.

Over the past few years, you have trampled on their freedoms under false pretenses. You have, unceremoniously for them, systematically defended the interests of the wealthiest. You have, on several occasions, displayed all your contempt for this people who nevertheless trusted you. And today, in a conflict that has nothing to do with them, you dare ask them to give up even more of what is rightfully theirs.

No, Mr. President, I refuse to pay the price you are asking us to pay. This price is that of your errors and your short-sightedness. It is that of submission to an ideology that has nothing to do with the well-being of peoples but is more concerned with the shareholders of globalization.

This freedom to which you refer, our ancestors never stopped fighting to defend it. Many of them died for her. They have, through their sacrifice, contributed to making France a beautiful and great country, a bearer of priceless universal values. The French, therefore, have no lessons to learn. On the other hand, you could no doubt, by listening to them a little more, take advantage of them.

Mr. President, what the French expect of you today is not that you incite them to new and incessant sacrifices. They want you to live up to their expectations. They want you to protect them and defend their interests. However, the freedom that you describe to them is only a new form of slavery.

**ER: This is an extremely good article, which we recommend in its entirety. A reminder from this article of deep stater Lindsay Graham’s memorable statement:

🇺🇦 The Truth Comes Out 🇺🇦

What does the United States want?

Sen. Graham: I like the path we’re on. With U.S. weapons and money, 🇺🇦Ukraine will fight Russia to the last 🇺🇦Ukrainian. pic.twitter.com/YyJObPMxeM

Say NO to war!

… We are therefore heading towards a war which, barring a miracle or an American reversal, can only end with the destruction of one of the two states. And the one most at risk is Ukraine. Our economy minister thought he was bringing the Russian economy to its knees with the sanctions. It is ours that dives. We must stop fueling this war against Russia, because it is hopeless. Sanctions have never changed the policy of a State. And the Russian people have demonstrated in their history that they know how to endure suffering and deprivation.

We have the right to be shocked by the Russian invasion and to condemn it. But we don’t have to intervene in a conflict which, basically, does not concern us. The vital interests of France, or even those of Europe, are not at stake. This is a conflict between neighboring countries whose populations are mixed and which have a very long common history. We have no interest in engaging in a cold or hot war with Russia. Only the American military-industrial complex (ER: western deep state) has an interest in it, and beyond that the entire American economy. The totally vassalized EU, which risks ruin with its sanctions as much during the first two world wars, still counts on the United States to recover. What a godsend for the latter that this war which they largely provoked, and which allows them to weaken Russia while vassalizing Europe like never before, making it dependent on their liquefied gas and their weapons, all without exposing the life of their GI’s! It is time for the French and Europeans, and even the Ukrainians, to take their destinies into their own hands.

If our president is not able to change the direction of the French liner for the interests of the French people, and those of Europe, it is up to Parliament, to our opposition, to do everything they can to get us out of this suicidal trap towards which the current follower dynamic leads us. Our future is at stake. If France leads by example, others will follow.

Deputies, live up to history and the mandate entrusted to you by the French people. 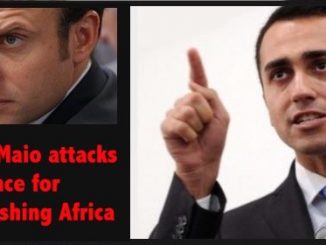