Lots of things are happening and many problems are getting discussed, but the concept of EU security remains as vague as ever. In her speech at the Munich Security Conference (MSC) on Feb. 17, the UK PM Theresa May called for a new defense pact with the EU. She believes this issue should be considered apart from the Brexit negotiations. This is an obvious about-face as the UK has always opposed the idea of setting up a European defense alliance, fearing it would sap NATO resources.

EU officials welcomed the PM’s initiative, emphasizing the need to separate this issue from Brexit. On Feb. 16, the spy chiefs from the UK, France, and Germany urged the EU not to jeopardize their data-sharing agreements when Britain terminates its EU membership. And they made this request openly in a press release!

Theresa May wants the new pact up and running by 2019 when Britain is to pull out of the EU, and perhaps sooner, if possible. There are just 10 months left to reach an agreement – a tall order. But Ms. May insists that she is in a hurry. She claims there is no need to wait until the Brexit deal has been finalized to get this signed.

In a nutshell, UK forces will continue to take part in EU missions, weapons will be developed jointly, London will continue to contribute to foreign aid programs, anti-terrorist activities will be coordinated, and international problems related to security will be handled cooperatively. In practice, this means all the parties will synchronize their foreign policies, as all problems are always related to security in one way or another.

Although the idea of forming a defense pact outside of NATO has been a matter of concern for Washington, no US representative at the forum spoke against it. This sudden change in the American attitude is striking. Prior to the conference, the US had expressed grave concern over the Permanent Structured Cooperation on defense (PESCO), warning it could undermine NATO.

Heralded as a turning point, PESCO emerged in late 2017. The UK, along with Denmark and Malta, has not joined. The pact commits its signatories to using the European Defense Agency for the joint development of any new weapon systems. This means that missions from the EU will have priority over those from NATO. The US ambassador to NATO, Kay Bailey Hutchison, warned there could be serious consequences for the EU if it shuts US defense companies out of PESCO projects.

Europe’s push for an independent system of defense is gaining momentum. An idea that had been mere words for some time has now taken shape as PESCO – a tangible step on the path toward a joint European armed forces.

Not every conflict that the Europeans have gotten mixed up in has been in their best interest. It was the US and the UK who invaded Iraq in 2003, although Germany and France opposed the move. The rationale for sending European troops to Afghanistan was to demonstrate support for America. The recent decision to launch a NATO train-and-assist mission in Iraq, which was made at the Feb. 15 meeting between the alliance’s defense chiefs, forces Europe to join the US in its confrontation with Iran – a country that is offering lucrative contracts to European companies.

Europe can never be truly independent without the capability to mount a robust defense on its own. For instance, the EU needs a joint border force to prevent illegal immigration – which is plainly a real threat. But NATO obliges Europeans to spend their resources deploying more forces to counter Russia – an imaginary threat no one takes seriously.  A border force would bolster EU security while an unneeded confrontation with Russia would weaken it.

Russia and the EU naval task forces worked together to fight Somali pirates. In 2008, Russia sent four helicopters and 200 soldiers to join the EU operation in Chad. Security is an area in which Moscow and Brussels could be cooperating instead of confronting each other were it not for the Americans.

A robust EU defense policy runs counter to the interests of NATO, while meeting the interests of European independence. The transatlantic relationship has been frayed enough with President Trump in the White House. Opposing the concept openly is too risky.

So the US has decided to maintain its control over the process “with a little help from its friends.” For Americans, the UK has always been the friend in Europe they could rely on in a tough situation. With Great Britain becoming a leading member of this new European alliance, US interests will be well protected while the existence of an independent European force will remain a pipe dream. 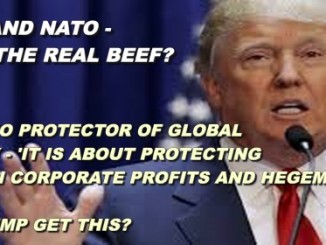 Trump and the End of NATO? 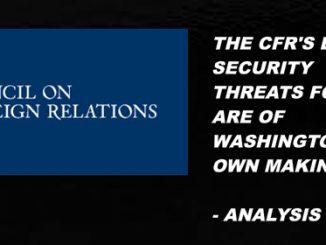