In his first week in office, President Trump signed an order temporarily freezing immigration from seven Middle Eastern and North African countries, including Libya. According to Trump, the order’s purpose was to “keep America safe” by blocking groups of people who cannot yet be properly vetted. Trump’s critics labeled the order a ‘Muslim ban’, deeming it unfair, mean-spirited, and racist. One recent editorial even criticizes Trump for playing up “the imaginary threat of terrorists” from the countries in question.

Now, after the U.S. court of appeals upheld federal judge Robart’s restraining order on the executive order, it appears that Trump plans to sign a new executive order before, or perhaps alternatively to, the appeal to the Supreme Court. But the question remains: is the executive order unreasonable? And is the terrorist threat ‘imaginary’? 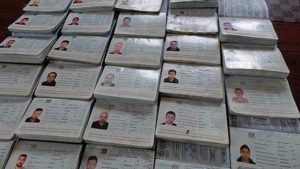 Libyan tribal leader Sheikh Khaled Tantoush doesn’t think so. Sheikh Tantoush, a fierce critic of the jihadist movements and one of Libya’s most esteemed clerics, was captured by Libyan “rebels” in Sirte in 2011 along with Colonel Gaddafi. He performed the final Islamic rites over Gaddafi’s body after he was murdered, and the Sheikh himself was subsequently imprisoned and tortured. In a 2013 show trial he was sentenced to life in prison on trumped-up charges of “glorifying Gaddafi”, but was released last month after spending over five years in prison.

In his first interview with Western media since his release from rebel captivity, Sheikh Khaled told SOTT.net that the so-called Muslim ban is meaningless to the vast majority of ordinary Libyans, who find it difficult enough to move from city to city, let alone leave the country for the U.S. There is an extreme cash shortage in the country, and the only Libyans with the means to come to the U.S. are mostly criminals and terrorists. He said:

A small number [of Libyans] might travel to the USA for studying, but the others [who travel] are traitors who have been working for and are paid for by the US government. The majority of Libyans don’t care about this ban because we are struggling to travel from one city to another in Libya… The real Libyans don’t care to travel to the USA. They care about finding a solution for Libya. This [travel ban] is a small thing for us.

Syrian President Assad gave a similar assessment of the ‘ban’ on Syrians, telling Yahoo News that it is “an American issue” and that his responsibility is simply to restore stability in his country, “in order to bring [the refugees] back”. When asked if he thought some of the refugees are aligned with terrorists, he replied, “Definitely.”

James and JoAnne Moriarty, the only official American spokespersons of the tribes of Libya, say the problem in Libya is even worse. In 2011, al-Qaeda and Muslim Brotherhood “rebels” took over all ministries of the Libyan government, including the passport office of the Libyan Interior Ministry in charge of Border Control and Strategic Institutions, which was put under the control of one Abdul Wahhab Hassan Qayed. Qayed’s brother was Abu Bakr Hassan Qayed (aka Abu Yahya al-Libi), a top-level al-Qaeda operative who was killed by U.S. drones in June of 2012. 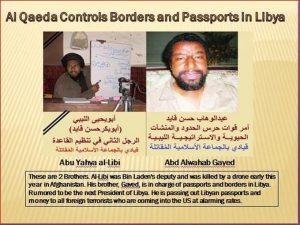 As JoAnne Moriarty put it, “Al Qaeda controlled the passport office right after the fall of Libya and was issuing Libyan passports to foreign mercenaries as fast as they came across the border.” For example, back in February 2014, the Libyans caught five spies from Qatar carrying fraudulent Libyan passports (including Qatari intelligence officer Abdel-Hadi Saleh Al-Rushaydi, Faraj Saleh Al-Mansour Jatlawi, and Ali Al-Mohamad Sadeq-Obaidi). The spies told Libyan authorities that the passports were provided to them by the CIA during NATO’s war on Libya in 2011 (see this article for pictures and a video of their arrest). 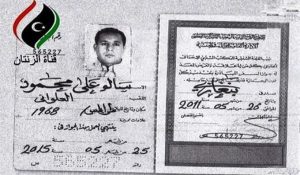 A fake Libyan passport provided to al-Qaeda-linked terrorist Abdelhakim Belhadj, created 26 May 2011, 3 months after the start of the war, 2 months after his release from Libyan prison 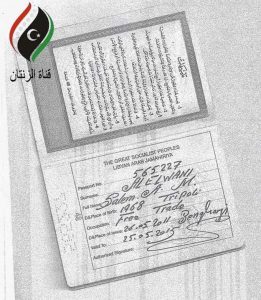 Belhadj’s fake passport, made out in the name of “Salem Al Elwani”. Notice the occupation: “Free Trade.” 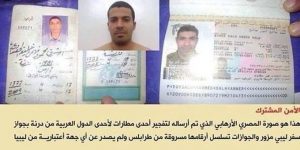 Another fake Libyan passport (Left) provided to an Egyptian mercenary (Ahmed Salh Amwer Salh). On the right is his Egyptian passport. Caption says: “Picture of Egyptian terrorist sent from Dorna with a fake Libyan passport to bomb an Arab airport. The passport number sequence was stolen from Tripoli but wasn’t issued by any recognized Libyan department.”

This identity-laundering scheme in Libya – where an untold number, likely in the thousands, of jihadi mercenaries exchanged their old ‘terrorist’ identities for fresh post-Gaddafi Libyan ones – became so bad that Morocco had to introduce a visa requirement for Libya due to the prevalence of fraudulent passports. In one month alone the Moroccans caught 285 foreigners carrying Libyan passports – from Pakistan, Chechnya, Mozambique, Afghanistan and Bangladesh.

The Moriartys told SOTT.net that the Libyan rebels used their control of the passport office not only to issue fake identities and passports to their fellow terrorists, but also to distribute funds to them, providing millions of dollars to English-speaking fighters sent to the U.S., where they were routinely passed through immigration and were given green cards or multiple-entry visas, at a rate of 100 to 1,000 per month:

James Moriarty went on to say that he has spoken to a pilot who flew out of Syria (now deceased), who told the Moriartys that he was part of caravan of three 747s that “picked up over 700 men each in Syria and flew them to the United States”, to an airport in New York. The pilots were then “required to sign a 21-page non-disclosure agreement that included guaranteed jail-time if they ever spoke about it.” This pilot told the Moriartys that upon landing, U.S. government officials gave these men passports and “buckets of money”.

The Moriartys hope that this information about the prevalence of Libyan passports provided to terrorists will influence the U.S. government to stop this from happening. At the very least, officials need to vet everyone who has traveled into the States from Libya since 2011. As for those who continue to come, the Libyan tribes have extended an offer to President Trump to cooperate with American officials.They know who most of these people are because they became notorious in Libya over the last six years of causing bloody mayhem there.

In March of 2016, the Tribal Leaders of Libya officially endorsed Trump for the office of President of the USA. In their message to Trump on behalf of the Tribes, the Moriartys wrote:

“The people of Libya reiterate their pledge to eliminate all the radical Islamists in Libya as soon as the U.S. stops support of these entities in their country. Thereafter, the Great Tribes of Libya have pledged to go country-to-country joining hands with other Tribes of the Middle east, and you as President of the United States, to eliminate radical Islam worldwide.”

As the Moriartys told SOTT.net on 12 February, this offer still stands. The Tribes are the only Libyans who know who’s who in Libya. As such, they are willing and able to work with the Americans to vet any individuals entering the United States from Libya, or carrying Libyan papers.

The Tribal Leaders are the only legitimate representatives of Libya’s approximately 6 million citizens. These ordinary Libyans, who make up 95+% of the Libyan population, have suffered for six years under the rule of violent jihadist groups like the Libyan Islamic Fighting Group, Ansar al-Sharia, Muslim Brotherhood and ISIS, all of whom were shepherded into the country by Western government agents and their clients in the Middle East. They are natural allies in the fight against the jihadists – not the illegitimate “governments” set up by the terrorists and their supporters.

ER recommends other articles by SOTT

Harrison Koehli co-hosts SOTT Radio Network’s Truth Perspective, and is an editor for Red Pill Press. He has been interviewed on several North American radio shows about his writings on the study of ponerology. In addition to music and books, Harrison enjoys tobacco and bacon (often at the same time) and dislikes cell phones, vegetables, and fascists. 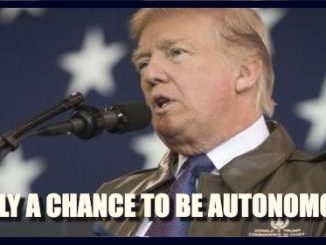 Did Someone Slip Trump Some Kind of Political Viagra? 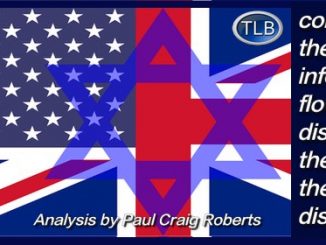 How Information Is Controlled by Washington, Israel and Trolls, Leading to Our Destruction